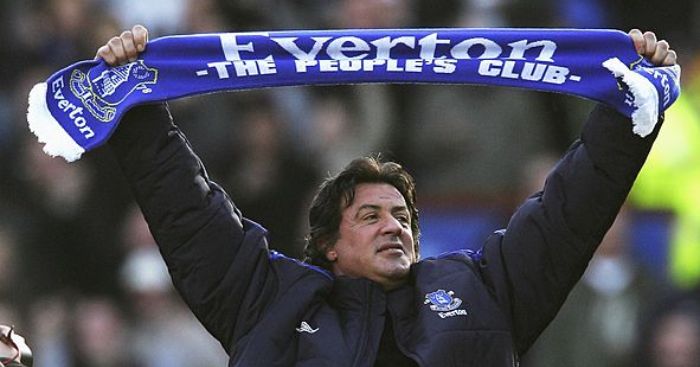 The football has restarted to much fanfare (geddit?) but there is still something missing from our lives. Pubs, for instance. However, there is a light at the end of the tunnel. Cinemas are about to get the green light. Hollywood is back. The Jamie Vardy movie might not be too far away. So here are some celebrity fans ready to run out on to the pitch. Some may be more authentic than others…

Mark Hamill: Wolves
Star Wars legend Mark Hamill has had a second coming in the franchise in recent years. He has also become a Wolverhampton Wanderers fans entirely by accident.

I am now. Never heard of them until 2 days ago. All because I "liked" a tweet from a #Wolves fan & they made me feel like family. Very nice!

After someone on Twitter suggested he could support the Midlands club, Hamill liked the tweet, thinking Wolves meant those of the Kevin Costner ‘Dances With’ animal variety. Realising his mistake, he said: “Everyone got so excited, I had to be a fan.”

The club’s official Twitter account welcomed him on board their Millennium ‘Molineux’ Falcon, tweeting: ‘The force is strong here, @HamillHimself. Great to have you with us.’

I guess he was glued to the game against West Ham. Which ended Frodo 0 Luke 2…

Elijah Wood: West Ham
The Lord of the Rings star developed a soft spot for West Ham United during the filming of the rather dubious hooligan flick, Green Street in the spring of 2004.

“I was in the Bobby Moore Stand, with the real fans, and that atmosphere had the most profound effect on me,” Wood said after watching the Hammers defeat Crewe 4-2 during their Championship promotion push that season. Ah yes. Those were the days of Marlon Harewood and Pards in charge.

“The passion and kinetic energy I felt was staggering, truly amazing. I know Crewe wasn’t the best of games to go to in terms of importance, but we kicked their ass all the same.”

The Americanisms can never be far away. Frodo is more likely to be seen at the Olympic Stadium on the big screen now that the Hammers have uprooted from Upton Park.

Daniel Craig: Liverpool
No Time to Die was just weeks away from general release in the UK and Liverpool were a few games from winning the Premier League when the global pandemic took hold to kick both into touch.

Daniel Craig is a lifelong fan of the Anfield club, having moved to the Wirral with his mother as a child. He surprised manager Jurgen Klopp during the Reds’ pre-season American tour in 2018 where the German blurted: “I got a hug off James Bond.”

By the time the next Bond film (hopefully) comes out in November, Liverpool will have won the Premier League for the first time in 30 years and Craig will have been Bond for almost half that time. Good things come to those who wait?

James McAvoy: Celtic
The X-Men star has more than matched the generosity of Premier League footballers on both sides of the border by donating £275,000 to the NHS during the COVID crisis.

The Scot is a passionate Celtic fan, and will no doubt be thrilled they were declared champions for the ninth straight year despite the Scottish Premiership season being called off early due to the virus. He still feels pain though: “You get the incredible highs, like beating Man Utd or Barcelona, but then the low-level depression when you get humped.” You mean Cluj, right, James?

He’s even donned the famous shirt himself in a few charity matches. And scored a decent penalty. Not sure about that somersault, though.

John Travolta: Australia
When the Socceroos sealed World Cup qualification after an epic penalty shootout against Uruguay in Sydney in 2005, the Pulp Fiction star offered to fly the squad to Germany in his Boeing 707, declaring: “I’d like to play my part for Australia.”

Travolta, a qualified pilot, was at the match in Sydney courtesy of his role as goodwill ambassador for Qantas.

After the match, the Australian players hugged Travolta and broke into a rousing singalong, including You’re the One That I Want, as well as the Australian national anthem.

Will Ferrell: Chelsea
The star of Anchorman and the critically panned but actually rather funny Daddy’s Home movies has been a Blues fan since 2009 when Chelsea visited LA for a friendly against Inter Milan.

Ferrell joked once that he probably contributed in getting Jose Mourinho the sack during his second tenure at the club in 2016: “I made a joke at the GQ awards in London where Mourinho was receiving some sort of special award and I made a crack like, ‘I love your style, seven men in the box, defensive soccer, keep it going.’ And then next thing you know – I’m so sorry.”

Seriously, though, he is now co-owner of Los Angeles FC. Wonder what Ron Burgundy would think of that.

WILL FERRELL IN THE NORTH END!

Tom Hanks: Aston Villa
Hanks has spoken of his love for Aston Villa off the back of visiting for one match when the Midlands club played a friendly in the United States. When the local Birmingham paper asked for his opinion on the managerial vacancy at the club, the actor replied: “Is Brian Clough still alive?”

Hanks recently posted a message on Twitter on the assumption that the team had already won a competition this season.

Aston Villa took the Carabao Cup! Up the Villa! Hanx.

That was in February. Four weeks before the final. Gary Lineker wrote: “Premature speculation?” Lineker was right. They lost 2-1 to Manchester City.

Sylvester Stallone: Everton
Stallone is a friend of Robert Earl, the CEO of the Planet Hollywood restaurant chain and formerly a major shareholder in Everton Football Club before they were eaten by Farhad Moshiri.

Following an invite to the club’s home ground at Goodison Park by Earl, the Rocky star said cheers from the 30,000-strong crowd had converted him into an Everton fan.

Keith Wyness, the club’s chief executive, could not resist a dose of big-time schmaltz as well: :Sylvester – and his part as Rocky – has a special place in the hearts of sports fans.”

Sly returned five years later, albeit not in person, appearing on the big screen to ask the supporters for cheers which he could use in Creed, the seventh instalment of the Rocky series. He even regretted not buying the club when he had the chance, saying: “That was when football clubs were affordable, but now it’s a billionaire’s game.”

Idris Elba: Arsenal
The London-born actor sent some messages to the world while he had coronavirus. Unfortunately, his team have come back with a really poor couple of sequels in Manchester and the south coast. It looks as though Mikel Arteta could do with a bit more passion in his acting on the touchline – like that Pep bloke he used to work with.

Elba has even gone on record saying how bad he would feel if London rivals Spurs ended up winning the Premier League: “I’d be physically ill, literally throwing up. They haven’t been doing that great for ages, so now they’re doing alright, good luck to them.”

Sean Bean: Sheffield United
The star of many a Hollywood pic, including The Martian and Ronin, has been a serious fan of Sheffield United from a single-digit age. He has 100 Per Cent Blade tattooed on his left shoulder and was on the board of the Bramall Lane club between 2002 and 2007. During that time, his relationship with Neil Warnock disintegrated, especially after relegation.

“The whole season was about Warnock being in the Premiership, not United. It was all self-publicity. Yet it was clear to those of us on the board that he was out of his depth at that level and that’s why there was no chance of his contract being extended – even if we had stayed up.”

Safe to say, Neil isn’t a great fan of When Saturday Comes, which showed our Sean as the Sheffield hero with a heart of steel and a liking for a pint.