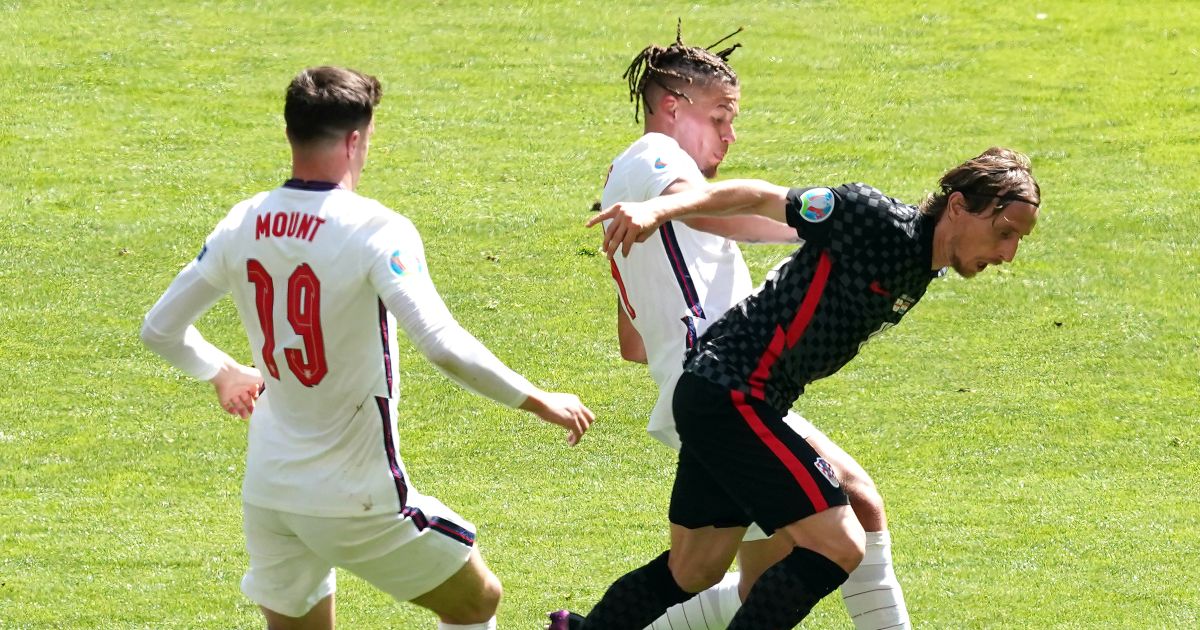 We have a new England narrative and it’s about hoofing and long-ball tactics despite Gareth Southgate saying no such thing, while Mason Mount should be dropped for running around…

Snob story
On Sunday, there was a fleeting moment when John Stones and Jordan Pickford appeared to disagree over the Everton keeper hitting the ball long. So of course Gareth Southgate was asked about this fleeting moment because this is England and every single second has to be scrutinised and then reduced to its simplest form for headlines.

Southgate answered at length, with the kernel of his message that the pair were deciding the best course of action and that “variety is important against top opposition”. But he also used the word ‘snobs’ – as in “we shouldn’t be football snobs” because there are “moments to go longer”, and the moment he said “snobs” he really should have known because…

Did he mention ‘lumping it’? Did he balls.

Did he mention ‘route one football’? Did he balls.

Did he ‘blast’ anybody? Did he balls.

Did he mention ‘hoofing’ anything? Did he balls.

What he did is echo the thoughts of pretty much every football coach in history when he said that “variety is important” and that there were “moments to go longer”.

But in doing so, he fell right into a reductionist trap and accidentally cast himself in the role of Mike Bassett. You really have to be more careful, Mr Southgate.

Row, row, row your boat
How odd that literally no newspaper mentioned this disagreement between John Stones and Jordan Pickford in their match reports on Sunday or Monday and yet by Tuesday, this disagreement was:

The narrative is born.

Long live the king
Congratulations to the good folks of LancsLive for this wonderful opportunism:

Hats all the way off and heading towards Chris Wood’s bonce.

Mount Rushless
Stan Collymore is happy with some facets of England’s performance but unhappy with others. And as he’s ‘the man who speaks his mind’, we must all listen.

He tells the Daily Mirror that he was happy with Declan Rice, Kalvin Phillips and Tyrone Mings, but he is not happy at all with Mason Mount, despite the Chelsea midfielder contributing to some excellent pressing of the opposition.

‘I want to see him concentrate more on attacking down a central furrow because there’s always a temptation for him to drift left to do his best work, a propensity to be here, there and everywhere, which sometimes you don’t have to be.

‘Take Modric as an example. Sometimes he just stands still because he knows the ball will find him and I’d like to see more of that from Mount.’

And of course, there is no flaw in asking Mount to mimic the non-movement of a footballer 13 years his senior who plays in an entirely different position. We could also point out that Modric did f*** all against England.

So Mount must now be dropped for not standing still.

‘I’d move Phil Foden into the middle with Jack Grealish and Raheem Sterling either side of him.’

Because Phil Foden would never drift left and try and be here, there and everywhere, would he?

Price of admission
Mediawatch did not even realise that there was any debate about the inclusion of Mount in this England team but then we looked at football.London…

…and it turns out that favouring Mount over Jack Grealish is something you must ‘admit’ like a dirty secret, especially ‘amid’ talk that Neville has almost certainly never heard.

No news like old news
It’s 2021. Google is a fickle beast. We all have to recycle football gossip to put food on the table but when you click on The Sun football homepage (and remember, The Sun has an army of actual football journalists with actual contacts) on June 15, you don’t expect to see this given such lofty billing…

Penny for the thoughts of The Sun’s Chelsea correspondent Andy Dillon.

Shaw thing
Still, at least that story was considered ever so slightly more important than this one, an actual ‘EXCLUSIVE’:

Recommended reading of the day
Mark Carey on England’s press