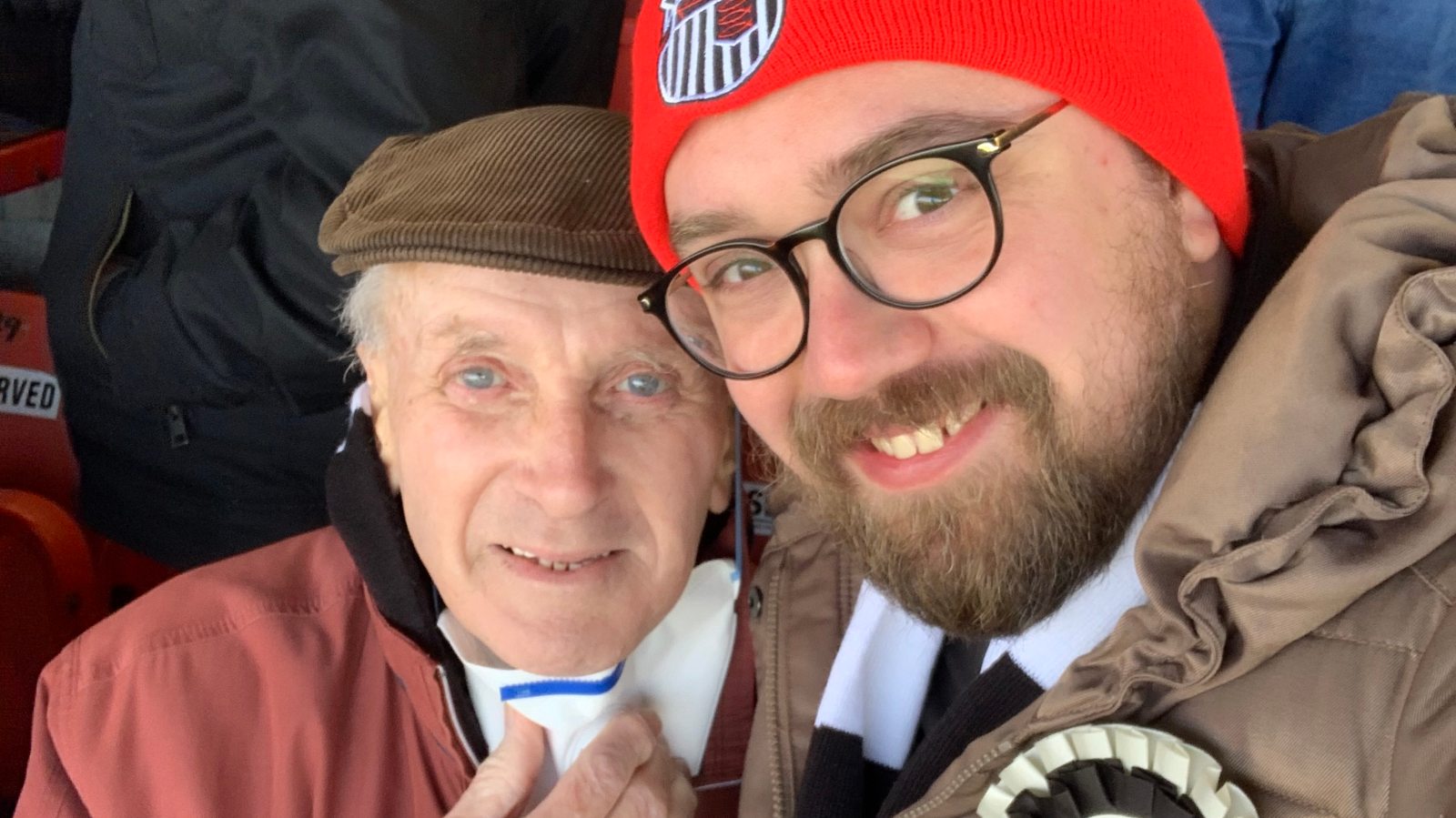 We didn’t know it then, but Grimsby Town v Torquay United, on Saturday 23 April 2022, would be the last match my grandad ever saw at Blundell Park. And I was there with him.

Blundell Park, to those not au fait with the east coast’s black-and-white yo-yo football club, has been the home of Grimsby Town since 1899. The club is famous for many things, but quite notable for being the answer to the pub quiz question ‘what football club doesn’t play in the town it’s named after?’

Cleethorpes, by the way.

Born in 1939, the same year as the Osmond Stand sprung up to cast a glorious shadow on the terraced houses surrounding the stadium, my grandad was Town through and through. A season ticket holder for many years, football to him – like to so many – was the chance to spend time with friends, sharing in the collective ecstasy and misery of watching 11 players hunt for glory.

But in recent years one by one his friends left us and by the time Saturday 23 April 2022 came around, and following his recent terminal cancer diagnosis, a loving rotation of family members were accompanying him to games.

Mesothelioma is a cancer caused by exposure to asbestos. It’s a cancer caused by the negligence of people who didn’t care about workers. The negligence of people who didn’t care that one day I would have to kneel next to my grandad and through my tears be careful when hugging him so as not to pull out his oxygen tubes while I said goodbye and told him how much I loved him.

Asbestos was known to be a killer as early as 1930, nine years before my grandad was born. Yet it still got him, and up and down the country there will be football fans at each game, not knowing it’s their last because of it.

On that bitterly cold but sunny April day, for a man who was so ill, he was remarkably sprightly making his way up the 100 or so stone steps of the Young’s Stand to seat J51. He spoke to the men who sat around him, the men who knew he was ill and who may well have feared his fate when he didn’t make it to the last two league games of the season against Maidenhead United and Boreham Wood.

I sat there next to him, my arm wrapped around his shoulders trying to protect him from the whipping wind that comes in from the river Humber. He refused to take my woolly hat or my gloves and sat as stoically as ever simply enjoying his football in his flat cap.

When Grimsby went 1-0 down, I feared that this day may not be all I’d hoped, but as I saw him leap into the air when Harry Clifton equalised the first of the day’s Grimsby goals, my happy tears began to flow. When Tristan Abrahams scored a 90th-minute penalty to secure the victory and Grimsby’s play-off status I had to hide my face.

As we talked throughout the match, he told me about his first game but for the life of me I can’t remember who it was against or what the score was – and that absolutely kills me. That memory is lost now. I was too busy listening to how he was talking, listening to the joy in his voice as he recalled going to Blundell Park for the first time, the same joy that he showed aged 82 leaping like a Harry Haddock from his seat to celebrate a Clifton goal.

About eight days after that game my grandad was taken into hospital, where he stayed for a couple of weeks before making the choice to go home. He listened to the Grimsby v Notts County play-off match on the radio from his bed on May 23, delighting in the extra-time winner that took Town to the next round.

I couldn’t bare to watch the Notts County game because I knew it could be the last game he’d ever hear, but in the end, hope got the better of me. If Grimsby won, maybe, just maybe he’d make it to the next round. And then maybe, just maybe…

Sadly though, he passed away on the morning of May 25 with family at his bedside.

After his death, I watched the semi-final v Wrexham and the play-off final v Solihull Moors on my sofa, wearing the Grimsby Town shirt I’d bought to go to the match with him, in the arms of my girlfriend, Jeri, and with our dog, Bo, on my lap.

I placed his picture in a frame on our table facing the TV so he could watch too, and I bet he loved those games.

My screams when Grimsby kept on scoring last-minute extra-time winners scared Bo and only the arms of my life’s love were strong enough to soak up all the tears as wished more than anything I’d have been in that stadium watching that trophy being lifted with him.

Football is a family, it truly is. When I shared the loss of my grandad on social media, I had countless Grimsby fans commiserating with me, and as Grimsby conquered all who came before them fans of those clubs joined in by wishing Grimsby well in his memory.

I didn’t get a chance to buy a programme at Grimsby v Torquay as I was assisting my grandad with getting through the turnstile, so an old school friend who is the host of the DN35 Grimsby Town Podcast contacted the club and Debbie Cook the Chief Executive of Grimsby Town sent me two. One went in my grandad’s coffin, along with a letter from me, and the other sits on my desk next to me.

In one of my darkest hours, a football club that isn’t even my own rallied around me and kept me a little bit safer from the sadness than I would have been otherwise. What a game, eh.

Dominic Stevenson is an author and football writer. His first book, Get Your Head In The Game, examines the intersection between football and mental health and was published in the UK and US in 2020 with Watkins Publishing. Buy it here.