Home F365 Features How are Preston’s posse of nobodies riding so high? 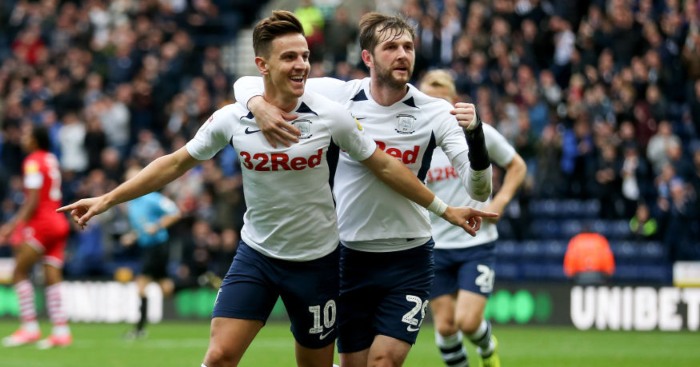 One look down Preston North End’s squad list is likely to provide the average football fan with enough ‘ums’ and ‘ahs’ to power a car fuelled solely on confusion and stumped glances. And yet somehow, this Preston side chock-full of apparent no-marks and lower-league hopefuls are one point off the top of the Championship. What’s more; it shouldn’t even come as a shock.

The Lancashire outfit are one of just five current Championship clubs who have not played in the Premier League since its 1992 inception, but reaching the top flight is no pie in the sky dream for North End, who have been heading in the right direction for the past half-decade.

Relative small fry they might be, but the league’s original Invincibles are starting to take stock from their 130-year-old predecessors, combining exciting football with consistent results from a bunch of players leaving a high percentage of football fans wondering just ‘who the f*ck are they?’.

So let’s begin by answering that query. Preston’s best known member of staff is the manager, Alex Neil, who has previous second-tier success with everyone’s favourite yo-yo club Norwich City. At 38 and despite being in his sixth year of management, he can still be categorised as a young, up-and-coming manager. This despite the fact he is doling out lessons to far more experienced coaches almost week in, week out.

The key players so far this season have been there in place for the last couple of years; this is not a club which relies on big-name signings, high wages and a constant turnover of playing staff. A near-entire British squad – supplemented by Jamaican midfielder Daniel Johnson and German centre-back Patrick Bauer – has been built on consistency, with just four first-teamers brought in over the summer, and only young midfielder Tom Bayliss for a fee. He is one for the future. Of the other three, only former Charlton defender Bauer is seeing regular action at Deepdale.

One of the main reasons behind Preston’s blistering start to the season – they sit third and are the highest scorers in the division – is that consistency. There has been no blooding-in period for key players; of the match-day squad to help Daniel Stendel lose his Barnsley job last time out, 17 were Lilywhites last season, and the four goalscorers have been at the club since 2017 or before.

The Preston North End recruitment, retention and sales model is the best in the Football League in my opinion. Experienced old head Peter Ridsdale has done a phenomenal job leading the process there.

There are also similarities between this side and the Sheffield United team which so gloriously won promotion from the Championship last term. They are the Blades sans overlapping centre-backs. While a preferred 4-2-3-1 formation with the right balance of a midfield anchor/hard man coupled with a deep-lying playmaker with a three-man advanced midfield all capable of switching between left, right and centre easier than a floating voter, is far simpler than what Chris Wilder expects from his 3-5-2, they are both squads consisting of players plucked from lower down the leagues, and with a largely, almost exclusively British core.

For all the merits of expanding a scouting system across continents, Preston’s budget does not allow for such extravagances. While Argentinean Emi Buendia was amazing last season for Norwich, Blackpool-born Tom Barkhuizen is consistently a star performer for North End this time around. Different strokes for different budgets.

Leagues One and Two have been home to some of the most talented players in the Championship, but they are often youngsters who could be picked up by anyone with a huge cheque-book, knowing a semblance of quality would follow. Preston are different. Armed with one of the lowest wage bills and budgets in the division, they are picking up seemingly average players and turning them into stars far exceeding their own expectations.

Barkhuizen was an average forward with League Two Morecambe, Jamaican Johnson’s experience was in loan spells with the likes of Yeovil Town and Oldham Athletic, midfielder Alan Browne arrived from Cork City, as did forward Sean Maguire. Likewise, winger Billy Bodin was a good player with Bristol Rovers in the third and fourth tier, but never a star even in those divisions.

I could fill up the rest of this article with players of similar ilks and comparable playing histories, and that says everything about North End. This is not a set of individuals; it is a team, and a team that has been constructed as part of a long-term project which battles against a miniscule budget and the geography of being surrounded by far more attractive propositions.

Fortunately for Preston, they are not fishing from the same pond as most of the teams around them; they are small fry in a big pond looking to jump into the biggest of them all. If they have achieved that come May, it will not be a surprise to anyone who has watched their progress over the last five years.