Home F365 Says How dour would Man Utd be without Bruno Fernandes? 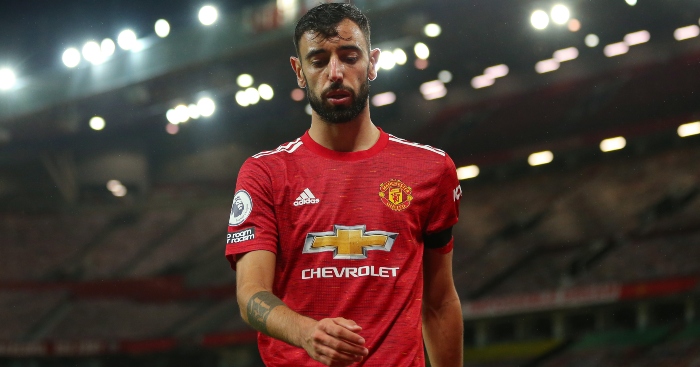 It was a victory that provided Manchester United with their first home win of the season but another which proffered more questions than answers. Principle among them: where the f*** would Ole Gunnar Solskjaer be without Bruno Fernandes?

Almost certainly, he would not have been in the home dug-out this evening. Many still doubt the manager’s credentials, and this dour victory offered little evidence to support Solskjaer’s case.

This was hardly the first charmless display on Solskjaer’s watch. Louis van Gaal and Jose Mourinho were pilloried for similar performances. For the three managers the common denominator remains many of the players on the pitch again on Saturday night. The difference between Solskajer’s side and those of his predecessors is the presence of Fernandes.

The Portuguese playmaker, and perhaps Marcus Rashford when he’s not toiling like he was against the winless Baggies, remain the only redeeming features about this United team.

Fernandes isn’t perfect. He had the lowest passing accuracy among the home players and it was that perceived flaw which reportedly allowed United the chance to sign him in the first place. A number of suitors were seemingly turned off Fernandes because of the regularity with which he gives the ball away – United themselves steered clear in summer 2019 because of that. It was only when they had little choice and Solskjaer had nothing left to lose back in January that they took advantage of a clear run at the Portuguese star.

Fernandes was guilty of giving the ball away again on Saturday evening. Almost a quarter of his passes went astray but without his willingness to look for the forward pass, United would be even harder to watch than they already are. He is the single driving force, the sole persistent threat to any United opponent.

The 26-year-old has played 34 times since joining from Sporting Lisbon at the end of January and his twice-taken penalty was the 32nd goal in which he has played a direct role. In the same time frame, Rashford is United’s second highest contributor having been involved in 17 goals. This season, United are yet to score a Premier League goal which involved neither Fernandes nor Rashford.

Fernandes on scoring 50% (7/14) of his PL goals for #MUFC from the penalty spot: “People criticise this situation saying, ‘penalties, penalties’.
“I’ve seen a lot of teams losing finals – World Cup, Euros, Champions League – on penalties, it is an important part of the game.”

Fernandes stands out a mile in most of the metrics as he does in the intangible elements that go into any performance. United’s No.18 is the first player perhaps post-Sir Alex Ferguson, certainly the first recruit not named Zlatan, willing to at least attempt to drag his team-mates up to his level, even if it is a losing battle. So many of Solskjaer’s players will take the first hiding place available to them when the going gets tough but Fernandes, time and again, has been inspired when the flak begins to fly. Mercifully for those currently unable to do so from the Stretford End, Fernandes is also willing to dish it out when standards slip as they often tend to.

Against West Brom, Fernandes almost moved level with Paul Pogba for penalties conceded but he was rescued by VAR, with David Coote eventually judging that the United star made just enough contact with the ball while flooring Conor Gallagher. It was a clumsy tackle, perhaps as careless as Pogba’s concessions against Spurs and Arsenal. But, unlike Pogba, Fernandes is willing to do the dirty work and since no team-mate has made more tackles this season, similarly to his passing, occasionally the odd one will have an outcome other than the one intended.

Perhaps it isn’t hard to stand out in Solskjaer’s team. Too often in recent years, simply being seen to give a sh*t has been accepted as input enough, especially while so many players appear to struggle even with that barest of minimums. The dressing room doesn’t appear to be short on effort and desire, and Solskjaer can be credited for that, but the quality and character undeniably is lacking. Without Fernandes, it’s unthinkable to imagine how worse off United might be.