Home Johnny Nic How can anyone be ‘proud’ of the Premier League? 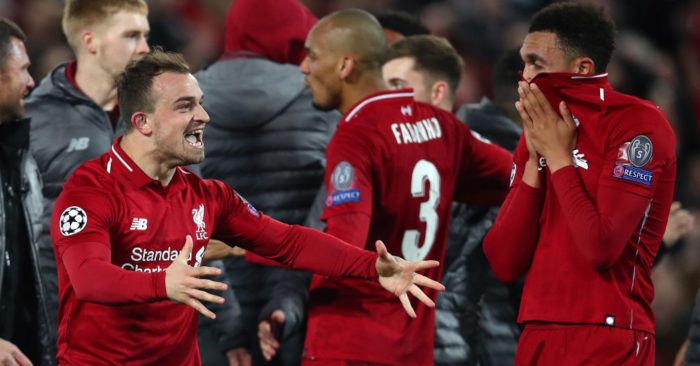 There have been some wonderful games in the top flight this year, as there are every single season. While we have had two stellar sides playing sparkling football, the rest of the league is the usual mixture of good, bad and indifferent. You can argue that the top two’s dominance is a product of their undoubted brilliance, or a consequence of the other’s mediocrity, or both. After all, a 25-point gap between third and second is an absolute gulf. But there is no arguing that those two teams have been wonderfully entertaining and on a totally different level. Their achievement is well worth celebrating and will live long in the memory for some of their sizzling football. Equally, the four clubs’ European performances were nothing but a joy. Fantastic.

But should this make us ‘proud’ of the Premier League? Judging from a lot of comments from fans and pundits this week, it actually does. I even hear people calling it ‘our’ football, as in English football, as though it is definable, as though it is still 1984, players are all from the UK or Ireland and are playing a 4-4-2 long ball, physical game and ‘outstrengthing’ foreigners. But it is 2019. Surely, there is no ‘our’ football anymore. Some say it is faster, but you see plenty of games that are quite slow and include a lot of sideways passing. Some say it is more physical, but some clubs have made a reputation of not being physical at all. Certainly no-one is Wimbledon in 1988. Is it more skilful? Quite how you might measure skill, I don’t know, but at best that would be a subjective take.

I hear how the European results this year prove it is the best league on earth. That doesn’t interest me one way or another, because I can’t see why it is even worthy of any thought, not least because football is not merely about results, it is about entertainment, competition and fun, all of which is notoriously hard to measure. And anyway, for it to be the best, surely the test isn’t how good the top teams are, it’s how good the worst teams are. So are Nürnberg, Huesca, Chievo, Guingamp, NAC and Feirense all worse than Huddersfield? Have they all entertained less? I would wager that those saying the Premier League is the Best League In The World do not know the answer to that question, if indeed one could measure such a thing in the first place.

What interests me is why anyone would want to make this an issue. Who cares if the Premier League is some notional ‘best’? How can you be proud of a league? Why would you want to be proud of the league? Why do people want to call it ‘our’ football or ‘English football’ as though it is one definable thing when the only thing that defines it is that it isn’t a single definable thing. Yes it’s played here, but after that…

The Premier League is merely a brand. Okay, it sells itself as though it invented football, but it didn’t, it’s a collective bargainer and an administrator, nothing else. How can anyone feel pride in that? Why would you want to? There is much to find issue with the Premier League over. It is not some sort of sporting, not-for-profit wholesome business. It is a money hoover, set up solely to hoover up money for its current 20 shareholders. Even if you feel some sort of national pride in the four teams having reached the European finals, how does this invest pride in ‘English’ football per se and in the division they play in? Surely, it doesn’t.

What ever happened last week doesn’t make say West Ham United, Bournemouth or Newcastle United any better. There is no reflected glory on them because of Liverpool and Spurs getting to the Champions League final, is there?

No-one supports a division. We support a side in it, but not the division, not the competition. And yet I heard pundits over the weekend purring with pride over ‘our Premier League’. It makes me feel a bit nauseous if I’m being honest.

The top flight does have a good claim to be the most cosmopolitan league. Players from 109 of the 207 foreign FIFA-affiliated nations have played in it. And clubs are sold to people from all over the world and the money used to buy them comes from worldwide capital investments. Is that what ‘our’ football is? Is that what is being celebrated? Possibly. But it seems unlikely. ‘Yay! We’ve got the best global capitalists owning our clubs’ doesn’t seem to be on many lips.

But after hearing Michael Brown talking about this on Sunday I think I realised why this it’s happening: it’s all part of the subconscious marketing of the Premier League brand.

It has ceaselessly marketed itself for 27 years, selling itself via some of the employees of those who have bought the broadcast rights as The Best League In The World. People believe it is, even if it is only because of exposure to repetition of the tag line.

If you doubt it is forever marketing itself, think how it has managed to inculcate the expression ‘in the Premier League era’ as a commonly used statistical definition, when there is absolutely no reason to judge any stat against the year 1992 as opposed to 1982, or 1872. That is a huge victory for marketing mindwipe. It establishes it as an era, as different and thus special. And it had to do that from the get-go to justify charging to see it on TV. Calling it Premier likewise suggests it is a premium product and like any premium product comes with a hefty price tag that you must pay. Hence Best League In The World. You have to pay to see the best, don’t you?

This is also why whenever there’s an exciting game in the league it will almost certainly be declared by someone in the broadcast media to be “a great advert for the Premier League”. Even though no such generalisations can be drawn from any single game. A cracker between say, Crystal Palace and Bournemouth isn’t an advert for any other match, now is it? How could it be? No-one sits watching a dull draw between Burnley and Southampton and says, well the Palace game was great so I thought this one would be too. Funny how boring games are not declared to be an advert for the Premier League, though isn’t it? Surely they advertise the league every bit as much. If you believe in it, the principle can’t apply only to great games.

The fact that four English teams have got to the finals isn’t a win for the Premier League as whole. It’s win for those clubs, not for any other, not for the league they play in.

There is a promo campaign forever on the go, often subliminally, now embedded into the lexicon of Premier League discussion, to promote the Premier League for commercial gain. But that doesn’t explain what anyone gets out of this in order to perpetuate it? Is it some sort of jingoistic thing or is it really just some sort of subliminal hypnosis kicking in from the Premier League’s promotional software that we’ve all had uploaded to our brain? I suspect that is exactly what it is.