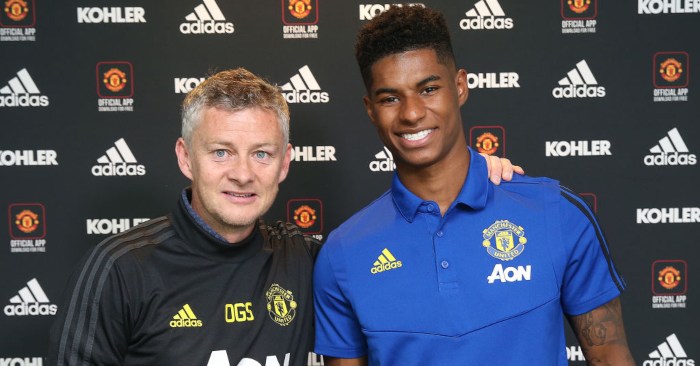 Not too many mails about Wilfried Zaha. Come on, people. Maybe read this; it might help. Mail theeditor@football365.com

Man United make poor decision after poor decision…
So here I am thinking that the Wan-Bissaka signing for £50 million was ridiculous enough, as I am sure Palace have pretty much mugged United off, but now I am hearing that Rashford has signed a contract for £250,000 a week. Do not get me wrong, the guy is young and hungry and will become a great player in the future for sure. However, how on earth does he deserve that much money from what he has done in his career so far considering he has not scored more than 13 goals a season for United having played 50 games per season between the start of the 2017/18 to end of the 2018/19 season.

I know Ed Woodward and the Glazers are a naive and seems to be running the club like a bunch of headless chickens, but if anything it looks like the club are being taken for a ride from the players and agents at the moment. Honestly the only player in that United squad who deserves to be given what they want in terms of a new contract/money is De Gea. I cannot believe that last season some of the fans were getting on his back. He has worked miracles on some occasions, for example; the Liverpool game at home during the 2014/15 season, the Everton game at home the same season, the Arsenal game away during the 2017/18 season and also the Spurs game last season away from home. I could mention a few more games to be honest. The fact that the club have offered new contracts to Jones, Smalling, Young, Rashford and NOT De Gea is beyond me. If it is because De Gea knows he can do better and does not want to sign the contract, then sure it makes sense. But how the f**k have we given new contracts to the others players!

At least Juan has signed a new contract. I am just baffled at the poor decision making of the club. It reminds me of the shenanigans that takes place at the company I work at. Bad decision after bad decision without learning from mistakes!
Rami, London

Who dreams of Arsenal?
Zaha’s brother claiming it’s his brother’s dream to play for Arsenal. Come on now pull the other one anybody who dreams about having to play for Arsenal these days must be waking up in a cold sweat. Imagine dreaming about having to play beside the worst defender I have ever seen in Mustafi whose favourite pastime is playing the opposition onside or alongside Granit Xhaka a footballer whose main talents seem to be driving the ball into row z or getting sent off. Seriously Zaha, don’t turn your nightmares into a reality. Also if Arsenal really only had 40 million to spend why open the bidding at your maximum price ? They are either lying about how much they have to spend or never learned how to haggle over price either way not a good look for them. Still though it’s always comforting to know no matter how bad of a state my own club get into Arsenal will always be here to make me feel better.
Aaron. CFC. Ireland

What’s wrong with using the back door?
Genuine questions on Champions League qualification prompted by Graham Simons, Gooner, Norf London in this afternoon’s Mailbox who said that Unai Emery ‘gambled everything on qualifying via the Europa League and didn’t seem to care about our final few league games – the result is we’re about £50m down in terms of transfer budget. That’s all on Unai… Unai’s created this mess – it’s up to him to make do and try and make top four however he can to land a new contract.’

Why does it matter the route in which a club qualifies for the Champions League?

Had Emery focused everything on securing a top-four finish, but gone out earlier in the Europa League and then finished fifth in the Premier League, would that have been better? Or would winning the Europa League but finishing fifth been a less worthy way of qualifying than finishing in the top four?

I’m not saying Emery was right or wrong, but it seems rather daft to pick issues with the manager prioritising competition A over competition B rather than competition B over A – surely the best situation would be to focus on both?

And if resources don’t allow that, then who could blame a man for prioritising the competition he knows very well and has won a (joint) record number of times, and successively at that, over the competition in which he is brand new?

And furthermore, who could blame him for prioritising the competition which offers a trophy in addition to the prize of qualification, rather than the competition that simply provides qualification?
Jonny (I wonder if this is another peculiarity of the derogatory English view on the Europa League, as opposed to that shared by teams on the continent?) Dance

Panic on the streets of Wolverhampton
As a Wolves fan the past two years have been nothing short of fantastic. On the pitch the management of Nuno and the recruitment of some truly exceptional players has led to the best period for the club in my lifetime (when I started supporting the club we were in the fourth division). Coupled with this, the playing style has again been nothing short of a revelation. Wolves fans are not snobs and they are certainly not footballing hipsters. When Mick McCarthy was successful the fans loved him, regardless of the swill he was serving up and the weird things he side (Why must you always ‘wipe your gob’ before getting on with it, Mick?). But the introduction on Moutinho, Neves, Jota and Jimenez has seen us score some goals that made me feel very funny in my special place.

Off the field, the change has been huge as well. After years of being treated like mushrooms by the snake oil salesman Moxey and Steve Morgan (I have a nickname for him that rhymes with ‘passive runt’ but I won’t say it here), Fosun have gone out of their way to make the fans feel connected to the club once more. Laurie Dalrymple and Jeff Shi have ensured communication with the fans is great and tried to improve the match day experience, which has been greatly received by the fans.

All of the above is why I feel like a complete turd saying what I’m about to – I think we’re getting preparation for this season horribly, horribly wrong. Nuno and his team prefer to work with a small group of players, with 18 in the squad seen as the optimum number. The problem being is we have Europa League football this year, for a club of Wolves heritage to back in European club competition that we were instrumental in its creation is a big deal. But even regardless of that, if Wolves want to even reach the same heights of last year (top ten finish and a decent cup run) we’re going to need more players and an upgrade in certain areas. So many clubs have struggled with the extra pressure on the squad European football brings. If we don’t increase quality and numbers we could see all of the progress from last year go south very quickly. All of the noise out of the club has been about the quality of the U23s, but I can’t help but feel that in order to continue our upward trajectory and maybe even challenge a vulnerable looking Arsenal in 6th spot, we really need to be pushing the boat out.

I look forward to this mail being jeered at by all and sundry come May next year.
John, Wolves, London

More ‘fanmail’ for silly Steve
Not to negate any of the responses to Steve from LA (only support further) the actual LGBT demographics in the USA as identified by Gallup, were 4.5% for men and 5.1% for women. It is also noted in many polls that when done anonymously, these figures are significantly higher – likely double. And if we were to read more emails like those from Steve, can see why.

Point being, that just stats alone would prove Rapinoe’s point that several in the squad would be LGBT.

Remember, the comment was made in response to questions about it being gay pride month.

The shame is that even today it’s risky for LGBT to speak their mind and even more so in the current US political climate with its war in all women.
Paul McDevitt

…I’m a bit late responding to Steve, Los Angeles but thought I could offer a different perspective. I’m a teenage girl who has never played football (other than garden kickabouts) and has absolutely no talent for it, but if I did happen to have an ounce of talent, Megan Rapinoe would in no way have put me off playing. In fact, although I was a fan of men’s football first, I think the fact that many female players are openly gay and proud of it can only be a good thing. LGBT people have players they can look up to and relate to. I hope this happens in the men’s game some time soon, too. These players (especially male players) have such a massive influence, why should we criticise them for using it for good?
Lucy (LFC)

A Champions League final XI
This is my Champions League XI made up from teams who have reached the final, but not won it (Valencia, Bayer Leverkusen, Monaco, Arsenal, Atletico Madrid and Spurs. 4-4-2 just like Atletico: