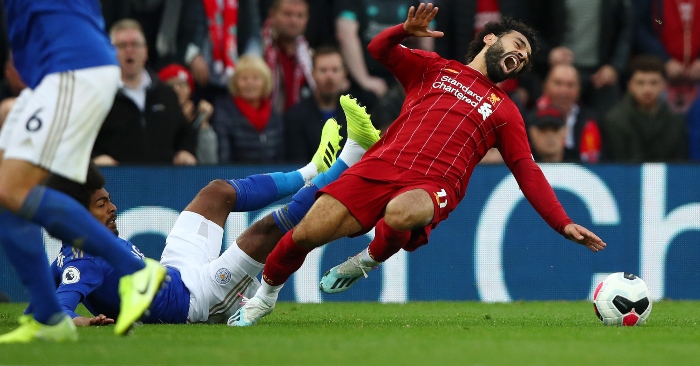 Jurgen Klopp was angry at Hamza Choudhury’s challenge on Mohamed Salah in Liverpool’s 2-1 win over Leicester City in the Premier League.

James Milner held his nerve to snatch a 2-1 win – a 17th in succession in the Premier League – after James Maddison’s late goal had cancelled out Sadio Mane’s first-half opener.

Four years and a day since he was sacked by the Reds, Brendan Rodgers looked like he had become the first manager since his Foxes predecessor Claude Puel in January to prevent Liverpool winning at Anfield.

But for the second successive week Klopp‘s side benefited from a stroke of luck as an error by substitute Marc Albrighton led to the winger fouling Mane and presenting Milner with an opportunity he rarely passes up.

Adam Lallana had to come on for Salah late on after he picked up an ankle injury from the Choudhury’s tackle, whop picked up a yellow card.

Klopp told BBC Sport: “It was a super game. We upped the tempo. The football we played was so important today. Leicester’s goal really stopped us but then we wanted to go forwards.”

On the penalty: “The penalty was obviously a penalty. I am happy with how we played, we got the result, that is super. We knew it would probably happen, we knew we were going to fight for the win and we did.

Klopp on Choudhury tackle on Salah

"A challenge which I really don't understand. How can he do it? The ball is far away. Dangerous as hell. He has to calm down. This is not the first situation. Super player, but these kind of challenges? No."#LFC

“Without luck we cannot win the amount of games we have won but over the 90 minutes, we deserved it, we deserved the three points. James Milner held his nerve and that was superb.”

When asked if Salah was OK, Klopp replied: “How can Mo be OK? How did he [Hamza Choudhury] only get a yellow card? Mo limped off the pitch. That’s hard. It was done to slow Mo down and that is not OK.”