Home Manchester City How concerned should Pep be about Gabriel Jesus? 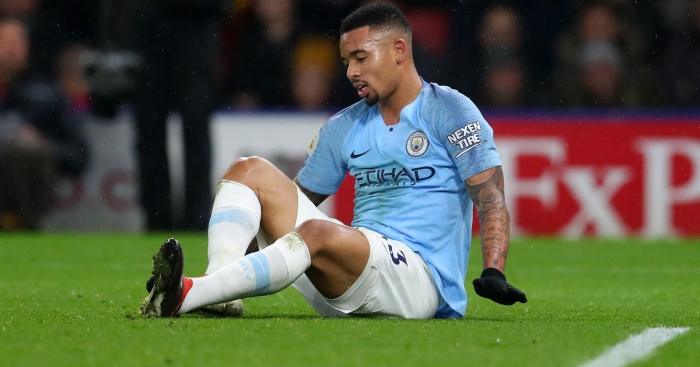 Manchester City’s five-point lead at the Premier League summit was achieved in a rather more uncomfortable fashion than it needed to be. For 85 minutes at Vicarage Road, Pep Guardiola’s champions were in sumptuous form, the two-goal cushion they took into the closing stages by no means an accurate reflection of their dominance of Watford.

By the end, City were clinging on. Abdoulaye Doucoure’s scrambled goal to halve the Hornets’ deficit reduced Ederson from playing no-look passes in his own six-yard box to long hoofs and time-wasting, and in the face of a flurry of late corners and set-pieces, City were made to graft where previously they were gliding to victory.

When Guardiola analyses the reasons for City’s arse-twitching finale, the manager will look at a number of factors. Javi Gracia’s men refused to quit despite being given a chasing for 85 minutes during which time the hosts saw only 27% of the possession. Ben Foster offered the most stubborn resistance, with the Watford keeper making a string of wonderful saves.

Guardiola’s greatest concern will be City’s wastefulness. While Foster was in fantastic form, the champions were profligate in front of goal in the absence of Sergio Aguero. Chief culprit was Gabriel Jesus.

The Brazil centre-forward wasted two gilt-edged opportunities in the second half to kill off the Hornets, the first a header from point-blank range which failed to trouble Foster, shortly before the goalkeeper was again untroubled when Jesus burst onto Riyad Mahrez’s sublime pass only to stab an attempted chip harmlessly wide.

Jesus did at least tee-up Mahrez for City’s second, but it is a damning indictment of his form this season that the assist was only his second of the season and just the third goal to which he has contributed out of City’s 45 in the Premier League.

Not that Guardiola was too worried before kick-off. He wouldn’t admit it if he was, but the City boss was keen to downplay concerns over Jesus after he also drew a blank against Bournemouth on Saturday.

“He just needs to relax,” Guardiola said. “I love his work ethic. I said to him: the work out on the pitch will sustain him. He helps us a lot. I am delighted.

“I don’t agree with the suggestion he did not make a good performance. Yes, strikers are judged on goals but we needed his runs – he made a thousand million runs in behind!”

Part of a centre-forward’s job description is to do the dirty work to give others a platform to shine and there is no question of Jesus not pulling his weight at Watford. But, as Guardiola suggested, strikers are also judged on their tangible return. On that basis, Jesus’ productivity is diminishing.

The Brazil striker has played just under half the minutes Aguero has been given and, proportionally, he has attempted the same number of shots as City’s greatest ever goalscorer. Having hit the target with 67% of his attempts, Jesus’ shooting accuracy is better than Aguero’s rate of 49%, and despite half the playing time, the youngster has had ten ‘big chances’ compared to the Argentine’s nine.

Aguero, though, remains the most deadly. He has netted five of those big chances, while Jesus hasn’t scored with any of his ten. With eight goals and four assists, Aguero has directly contributed to a goal every 80 minutes – almost double the productivity of Jesus, who has a goal or assist every 157 minutes.

Criticising any young striker for failing to match the standards of one of the Premier League’s greatest ever is harsh. But such is the standard expected by Guardiola – and Jesus has shown he is capable. The youngster seemed to be ushering Aguero towards the exit door very quickly after he walked through the entrance at the Etihad and at the same stage last season, Jesus was matching his team-mate’s output.

Any 21-year-old is allowed to regress slightly, especially one like Jesus who caught fire as soon as he arrived in the Premier League from Brazil. And the fact that he is fulfilling all his other duties in Pep’s system while still getting goalscoring opportunities suggests a return to form is a mere matter of time.

But with City’s trip to Watford the first of nine games in a month combined with his personal desire for greater responsibility than the more restricted duties he has been given so far this season by Guardiola, Jesus needs goals to supplement the graft.