Home Mediawatch How did Manchester United NOT appoint Mark Hughes? 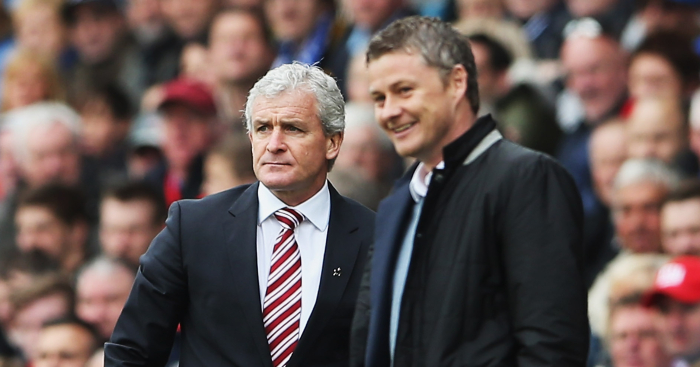 Neiled it
The world of football journalism is most certainly benefiting from some glorious hindsight on Wednesday. For example, literally no-one saw Jose Mourinho being sacked so soon by Manchester United – many had reported just hours prior that he was safe – yet five different outlets now have ‘the inside story’.

Neil Custis of The Sun is one of many who knew the seeds for his sacking had been sown in the summer. ‘His mood has been dark since that tour of America,’ he writes. ‘When he was asked if he was satisfied with the squad, he refused to answer.

‘After £400million had been spent on 11 players, he wanted more.

‘”More!” You could almost hear Woodward echoing the scene from Oliver Twist.

‘But it was what he spent the cash on that was the problem – or rather what he did with the ingredients after that.

‘What came out of the mix just was not Manchester United.’

This is the same Neil Custis who said on November 23 that ‘the club needs to allow Jose Mourinho to build on what he has achieved so far’, and that ‘his two seasons have been an achievement’. Less than a month later, we’re supposed to believe this was a long time coming?

Oh, and it’s funny that we are now being told that ‘what came out of the mix just was not Manchester United’. Back in August 2017, he told Sky Sports the following.

“What I see Mourinho having done, having been around the club and going everywhere with them, is that he’s got the club back. He’s got the spirit back, the relationship back between the club and the fans, the fans and the players. The spirit among the players now, compared to two years ago, is chalk and cheese. In a year, he has got the giant that had fallen asleep back tall and walking again. I just think he’s done a fantastic job there.”

In that same interview, he said that Mourinho “simplifies football, whereas I think Guardiola overcomplicates it”, adding that “I don’t see any progress” from a club who would finish 19 points clear of Mourinho’s reawoken giant by season’s end.

‘A poster with a picture of Mourinho on it was held up before the game by a City fan entitled ‘The Finished One’.

‘I don’t think he will get the sack’ – Martin Samuel, Daily Mail, September 20.

Collyless
Even Stan Collymore is wise long after the event. He tells the Daily Mirror that ‘Manchester United could not have picked a worse time to sack Jose Mourinho,’ and that ‘what Woodward should have done is got rid of Mourinho in the summer’.

Why would he sack someone who was about to qualify for the Champions League?

Paul the other one
But the absolute hottest of all the possible takes comes from Paul Ince, who appears to have gone a bit mad.

‘The caretaker manager should have an understanding of Man United, and if you look at who has links to the club but is external, that doesn’t leave many realistic options. You’d look at someone who has managed at a decent level, and knows it inside out.’

Ole Gunnar Solskjaer sounds like a solid bet then, yeah?

‘If you’re picking someone for the caretaker manager, I believe they’d got to have managed previously and have a deep understanding of what it means to be at Man United.’

Eight years as a manager, two years as United’s reserve coach, and 11 years as a player at Old Trafford? Perfect.

‘It’s got to be someone who’ll galvanize the players, and someone who they’ll respect. It seems there was a lack of that under Mourinho.’

‘The suggestion of Ole Gunnar Solskjaer makes me laugh, that has to be a joke. It’s absolute madness.’

Oh. That’s weird. Who would be your preferred choice then, Paul?

‘He’s not working at the moment, and he had seven or eight years at the club. He’s been a very good, successful manager and he more than many understands what it’s like to be a United player.’

There’s a reason he’s ‘not working at the moment’. And why does Solskjaer not ‘understand what it’s like to be a United player’ after his 11-year spell at the club, compared to Bruce’s nine years?

‘Whether he wants to go as a caretaker manager, I don’t know. But, I could genuinely see him coming in on a caretaker basis, turning United around and being offered a full-time contract.’

You ‘could genuinely see’ Steve Bruce ‘being offered a full-time contract’ as manager of Manchester United. Steve Bruce, sacked by Championship Aston Villa earlier this season? That Steve Bruce?

‘He’d be the ideal selection to steady the ship until the end of the season. He’d be able to manage the players in no time. Between him and Solskjaer there’s no comparison.

‘Plus, I’d love it to be someone English, and someone who United fans through the ages immediately recognise and say ‘I remember Steve Bruce, what a player he was.”

United fans of course have no idea who that fella is who scored that goal in 1999. And ‘there’s no comparison’ between Bruce and Solskjaer because one of them is English; we got there eventually.

‘The only other caretaker candidate I’d choose would be Roy Keane. He’d knock those players into shape in no time, he’s managed, and he’s familiar with the club.’

He’s also not English, Paul. Abide by your own ridiculous rules.

“You’ve got two managers now who are not managing at this moment in time who were there at the start of Sir Alex Ferguson so to speak, or were there when we started winning the league in 1992/93.

“Bringing in Solskjaer, he struggled at Cardiff – although it might have been a bit early for him – and it’s a good one for the fans but I just kind of think there are two managers there who are experienced, know the club inside out and I’d be looking at those two names if anything.”

Life for rent
‘Jose Mourinho hotel: Inside the exclusive Lowry where axed Man Utd manager lived for 895 days and spent £779,000 on rent’ – The Sun online.

‘Jose Mourinho finally checks out of the Lowry Hotel… after 895 days and an astonishing £537,000 bill’ – MailOnline.

Plenty to compensate for
‘Manchester United face shelling out £29million to Jose Mourinho if they sack him now’ – Daily Mirror, October 6.

‘Mourinho will pocket £24million after the Old Trafford hierarchy opted to part company with the self-styled Special One on Tuesday morning’ – Daily Mirror, December 18.

‘Woodward and executive co-chairman Joel Glazer spoke on Monday night and decided to act with United 19 points behind Premier League leaders Liverpool, 11 points adrift of fourth spot and players disillusioned with Mourinho, who is set for a £15million pay-off’ – Daily Mirror, December 19.

With his hand, presumably.

I insist
‘Mauricio Pochettino insisted he cannot tell the future after he was installed among the favourites for the Manchester United job’ – Daily Mirror.

The word ‘insisted’ has pretty much lost all meaning when it comes to football journalism, hasn’t it?