Home F365 Says How do Spurs approach the unlikeliest of finals? 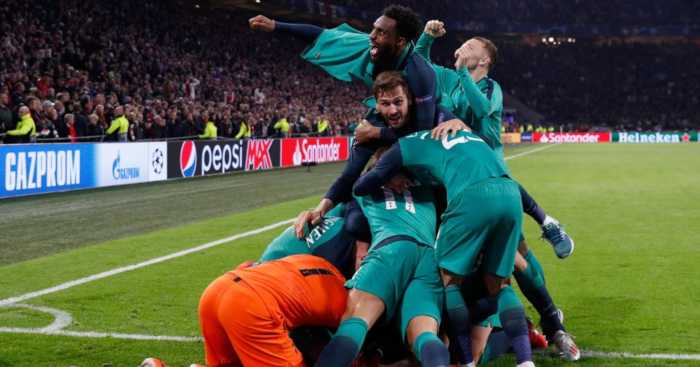 Since Tottenham signed Lucas Moura on January 31, 2018, Liverpool and Manchester City have signed ten players on permanent deals. Add in Manchester United, Chelsea and Arsenal and that total grows to 22. Ajax and Borussia Dortmund, the two foreign clubs eliminated by Spurs, have signed 20 players between them over the same period. We have been force-fed the axiom that new signings are the key to progress, but Tottenham are the antidote. This was never meant to happen.

By every measure, Tottenham are an exception. They hardly have a barren history, but Spurs are the only Champions League finalist in the last decade for whom this is their first final. Look at the last 20 final places, plus this year: Real Madrid take up four, Barcelona and Bayern Munich three, Manchester United, Atletico Madrid, Juventus and Liverpool two each. We have grown accustomed to the familiar faces. This was never meant to happen.

It is the financial gap that best reflects the achievement. Tottenham have the sixth highest turnover in the Premier League, and the tenth highest in Europe. Soccernomics tells us to judge the likelihood of success by wage bill rather than transfer spend, but latest figures have Tottenham’s annual wage bill at £148m – £92m below any other member of the Premier League’s Big Six and exactly half Manchester United’s.

That last comparison is truly astonishing: It would take two Harry Kanes, two Christian Eriksens, two Jan Vertonghens and two of every other Tottenham player to match Manchester United’s wage bill. This was never meant to happen.

We have witnessed astonishing overachievement before, not least in the Premier League in 2015/16. But we have not seen such a sustained period of a club punching above their financial weight before, to the extent that it has become normalised. Tottenham have become part of the Premier League’s established elite through overperformance, not by reputation. They are the constant gatecrasher at a high-end soiree.

(I’m also not stupid enough to ignore the obvious retort from Arsenal supporters about Arsene Wenger. Wenger’s run of consistency was indeed excellent, and was heavily praised; the criticism only grew when it fell away badly or Arsenal collapsed in Europe. But between 2008 and 2017, Arsenal never ranked outside the Premier League’s top four for revenue – and only twice were outside the top three).

When Tottenham’s run of consistency was broken, we assumed it would be through a dip. Players would leave for higher wages, injuries and accumulated fatigue would hit hard and transfer market parsimony would double down the negative impact. To some extent, that happened between January and May in the Premier League. But one of the most remarkable aspects of this team is that their uniformity has been ended not by falling backwards, but rising up.

The elephant in the dressing room is that this is not even the best Tottenham team of the Mauricio Pochettino era. The class of 2016/17 was far better, achieving 86 league points and finishing 11 points clear of fifth place. It had Kyle Walker, a fully-fit and full energised Harry Kane, Dele Alli and Christian Eriksen, and Son Heung-Min as a genuinely attractive attacking option on the bench. That team tumbled out of the Champions League and Europa League at the first hurdle, to Bayer Leverkusen and Gent. This one has reached the Champions League final.

That speaks of Pochettino’s ability to drag his team on through the roadblocks, both external and those of their own making. Like Jurgen Klopp, he is unafraid to talk up and exude the immeasurables – hunger, passion, desire, belief – but uses them in conjunction with pragmatism and preparation. Only in the right combination can that create something truly powerful.

Saturday should be viewed as a glorious bonus for Tottenham, a shot at something that nobody ever thought possible on a stage that nobody thought they could reach. Glorious bonus equals freedom: go out there and express yourselves. Tottenham’s greatest victories under Pochettino have come in exactly such circumstances.

But European Cup finals cannot arrive without pressure, and there’s a flipside to the ‘glorious bonus’ principle. If it’s hard to envisage Tottenham ever overcoming the financial might of Manchester City et al to win the Premier League title, it’s also optimistic to predict that they will ever be here again. If it’s a free hit, it might also be their one and only free hit. Pochettino has already alluded to the possibility of leaving Tottenham if they win, because there’s nowhere else to go but down. But even reaching the final feels like a generational achievement. The freedom of the free hit morphs into a pressure to make the most of it.

Tottenham are second favourites against Liverpool. But they were second favourites against Manchester City and against Ajax. Judge him by trophies and Pochettino is not the best, but there is no manager in the world who has proven himself more capable of making a team greater than the sum of its component parts and its comparatively scant resources. This is his shot at Tottenham immortality.

The only answer, as Pochettino will stress, is to leave Madrid without regret. This whole Tottenham story has been built upon the principles of doing your best and giving all you can to prepare and execute an unlikely masterplan. Do that, and nobody can ask any more. Defeat will not feel like glory, but take a step back and admire the remarkable journey. This was never meant to happen.