Home F365 Features How do you replace Ronaldo? Not with Neymar… 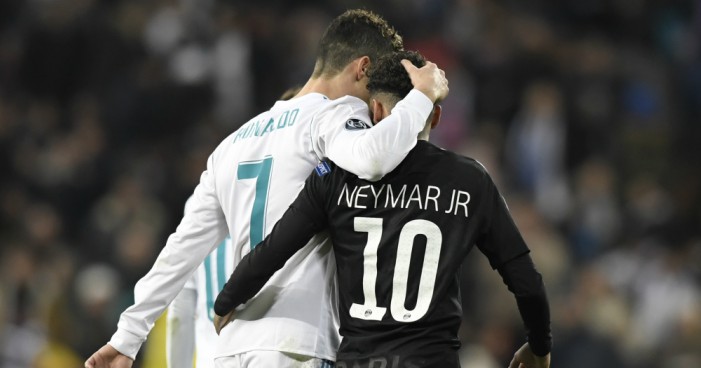 And so, after nine years, 438 games and a phenomenal 451 goals, Cristiano Ronaldo has bid adios to Real Madrid.

For any ordinary 33-year-old, the €112m Juventus have laid out would seem like an absurd amount of money, but Ronaldo is no ordinary 33-year-old. His outstanding fitness levels, outrageous talent and commitment to self-improvement have nullified the effects of age, so much so that many Real Madrid fans feel they should have charged Juve rather a lot more.

You can see why – he is showing no signs of letting up, and it is not inconceivable to think he could have carried on at that level for a few more years.

But with a new manager at the helm, perhaps the time is right for Real Madrid to move in a new direction.

He obviously has enormous boots to fill, and his unparalleled goalscoring record will be nigh-on impossible to replicate. But even beyond the raw goalscoring figures, he brought so much more to the team; his speed, skill and unpredictability, his threat from both set pieces and open play, his technique with both feet as well as his head, and his unrelenting will to win. He is much more than just a player, he is more like several top players rolled into one.

This is why Real Madrid shouldn’t look to replace him, because there cannot be another.

Instead, they should look to replace elements of his game, and re-organise the structure of the team in such a way that the impact of his departure will be softened.

Madrid president Florentino Pérez, though, is well-known for his love of galácticos, and rumour has it he is looking to fill the Ronaldo-shaped void with another superstar – Paris Saint-Germain’s former Barcelona forward Neymar.

If a move for Neymar does go ahead, it could be a big mistake. New manager Julen Lopetegui was given the role on the back of his experience of working with young players and his ability to foster a team ethic, but the arrival of a massive ego such as Neymar could undermine the togetherness that he will look to engender. Of course Ronaldo possesses an equally large ego, but it takes a different form to Neymar’s. Ronaldo’s made him driven in pursuit of perfection, and as such he was a leader by example to his teammates. Neymar, on the other hand, has been seen to put himself above the team since joining PSG, and created disharmony in the dressing-room in the French capital with his desire to be the top dog.

Lopetegui will probably not have a say in the matter, though. If Pérez wants to sign Neymar, he will do all he can to make it happen.

A more sensible approach would be to make more use of the young players they already have at their disposal, alongside experienced players and a couple of choice new signings. The talented 22-year-old Marco Asensio is a favourite of Lopetegui’s from his time in charge of the national side, and he is sure to be used more this season after being given very little airtime under Zinedine Zidane, while young Brazilian prospect Vinícius Júnior has now joined Real Madrid after his transfer was agreed last year.

These players are the future, and using these players alongside existing experienced players, such as Gareth Bale, Luka Modrić and Isco, would pave the way for such youngsters to lead Madrid forward into a post-Ronaldo era.

And if Real Madrid were to make a move for, say, Eden Hazard and/or Robert Lewandowski, it would not only appease the fans in the short term, but also go some way to filling the void of goals and attacking flair that Ronaldo has left behind.

After Zinedine Zidane’s departure back in May, it was always going to be a summer of change at Real Madrid. Now, with Ronaldo leaving as well, it represents a clean break with the past. It is a new era for Real Madrid, and they should look to embrace it. Rather than simply trying to replace him, they need to find a way to move on in another direction, one way or the other. There will never be another Ronaldo, but with the right management and the integration of the old guard, the promising youngsters and one or two new signings, they will be able to thrive without him.