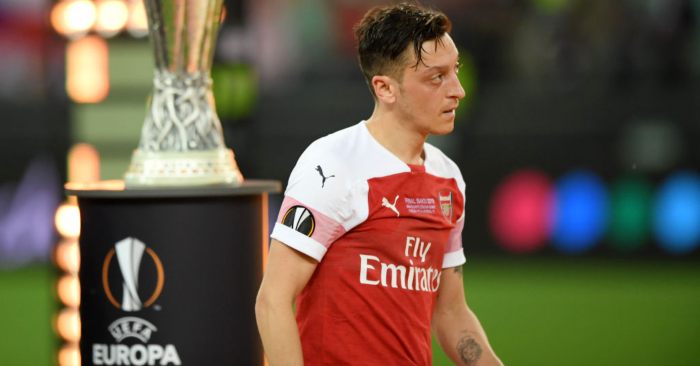 It’s worth remembering that Arsenal’s signing of Mesut Ozil was so extraordinary, so unexpected, so impressively ambitious that we consistently referred to him as ‘Mesut f***ing Ozil’ in those first few months, astonished that this wonderful footballer had joined an Arsenal side that had just finished fourth. Arsenal had to treble their transfer record to sign a World Cup winner who was understandably reluctant to swap Real Madrid for the Gunners, but Arsene Wenger was a persuasive man back in 2013. Ozil said earnestly that “it is clear that the club has huge ambition” and we did not even laugh. That was six years ago.

It’s also remembering just how phenomenal Ozil played in tandem with the effervescent Alexis Sanchez for three seasons during which they won the club’s Player of the Month award 15 times in total. Put aside for a second the bubbling jibes about them failing to truly challenge for the Premier League title; they were simply dazzling together, with Ozil’s vision and deftness contrasting beautifully with the energy and finishing prowess of the Chilean.

“I get on the best with Ozil,” said Sanchez in late 2016, by which juncture it had become clear that Arsenal had carelessly built only half of a very good team. “I enjoy playing with everyone but I get on even better with him. We don’t need to say anything to each other, it just takes a glance. Having a player like Ozil in midfield and doing one-twos with him is fantastic because he is a quality player going forward.”

Contrast that with the portrayal at both Arsenal and Manchester United of Sanchez as an isolated figure with few allies, never mind friends. Ozil was the catalyst for Sanchez’s untouchable spell in English football and the German was equally grateful for the presence of Sanchez, as both looked around a dressing room which housed no other equal. By the summer of 2016 there were already noises about the pair refusing to sign new contracts that would expire in two years’ time. By the summer of 2017, nobody could really argue with their stance that their ambitions could be better met elsewhere. That was two years ago.

We all know the rest of the story – a collapsed deadline-day move for Sanchez to Manchester City that seemed to leave both players in stasis, counting down the days, weeks and months until the January 2018 transfer window would surely bring some closure in the form of a transfer or an agreement for a summer move. By January it was clear that Sanchez had suitors but Ozil had none of any significance, leading both club and player to panic their way blindly into an extended and expensive marriage of convenience, with Arsene Wenger obscenely referring to the German’s £350,000-a-week wages as the “cheapest option”.

Eighteen months on, both Ozil and Sanchez are partners of sorts once again, though this time they are united by their status as players who are bound by their own ludicrous contracts. No clubs in the Premier League or beyond would pay over £300,000 a week for any 30-year-old, never mind one that is woefully out of form. Ozil looks and plays like a man out of time, a luxury No. 10 in an era when every player must press quickly, burst quickly and then recover quickly. He clearly has no real relationship with Unai Emery, a manager with a dozen tactical plans, only a handful of which has room for Ozil.

“I want us to be a chameleon team,” said Emery last month. “To be able to play in possession, in static attack against close opponents, or to counterattack. For the first, Ozil suits very well, he has the virtue of discovering spaces.” We can only presume there was then a pause before the Spaniard continued: “For the second, Aubameyang. To the extent that we are able to combine it, we will grow.” But it was Aubameyang who was name-checked again at length, with Emery talking about the ‘explosion’ offered by the Gabonese striker’s game. If there’s one thing Ozil cannot do, it is ‘explode’.

It’s lazy to talk about Ozil in terms of greed – he signed a contract that was offered, and we would all do that – or indolence; he does have a certain body language that will always irritate some who want to see a physical incarnation of effort, but six years ago he had the same body language and he was Mesut f***ing Ozil; he just needed at least one teammate on his wavelength and a possession-based style to thrive at Arsenal. Neither are in evidence now under Emery and the future looks troublesome and murky.

For both, a parting of the ways seems the only real solution, with Emery’s cherry-picking of Ozil’s talents likely to overshadow another season of transition. But that would probably mean Arsenal paying half Ozil’s wages for the German to play elsewhere. That sort of arrangement will always attract derision but, to quote Wenger, it might be that greasing Ozil’s exit is the cheapest option.