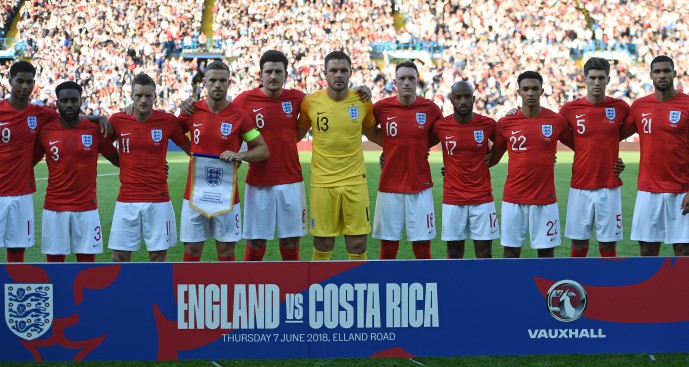 Desperation looks like this
‘As the World Cup fever hots up ahead of Thursday’s opening match, the Mirror was given an ­exclusive behind the scenes tour of the complex.’

Translation: We went to the hotel where England are staying and they showed us round.

Also, who says ‘the World Cup fever’? Your mum? And is it a state of mind or a dance attempted in Walkabout on a Friday night?

Apparently, the Mirror ‘were shown the suite Southgate or an FA chief will use’, which is a wonderfully vague way of saying they were shown a suite.

But the real joy in these ‘inside the England hotel’ pieces always lies in the photographs of the hotel, because there is literally no way to describe a photograph of a hotel bathroom without basically saying ‘this is a bathroom’.

There is also a photograph of a mini-bar (containing only water) with the caption ‘Fans will be hoping the England mini-bar looks like this’. Are you spotting a theme yet?

Insightful, we are sure you will agree, but no competition for what has emerged as Mediawatch’s most favourite picture caption of all time:

‘Our strikers, goalies and midfielders will be curling up on this sort of bed.’

Secondly, where the f*** are the defenders sleeping?

Endurance test
While the Mirror end their piece by saying that ‘If Southgate’s pick of players are as impressive as his choice of hotel, maybe we’ll get beyond the quarter-finals for once…’, the Daily Mail are not as complimentary.

They describe the hotel as ‘roughing it’, saying that the England team will learn ‘how the ‘other half’ live’ in the ‘basic backwater of Repino’, because of course us common folk are always staying in hotels with swimming pools, saunas, indoor football pitches, gym and snooker rooms. It’s basically a hostel.

‘If the squad want to travel to the city of St Petersburg – dubbed the ‘Venice of the North’ because of its numerous rivers and canals – they will have to endure a tedious 19-mile train journey lasting 45 minutes.’

Well they probably won’t; they will probably get a team bus, rather than ‘endure’ a journey that sounds pretty bloody marvellous to anybody who normally goes to work on Northern Rail.

‘While it may have a nine-hole golf course nearby, some of the players may not think it is up to par.’

‘For entertainment outside the complex, the players will have to rely on a wine shop, supermarket and tiny disco.’

What the hell happened to the golf course in the time it took him to write four miserable paragraphs?

Rising damp
‘The World Cup, yet another World Cup, is about to pass England by’ wrote The Sun’s chief football reporter Neil Ashton just three months ago. That came after he had written that ‘soon enough, another international tournament will slide by’ and that ‘England are slowly fading away’.

So Mediawatch feels a little discombobulated when picking up The Sun to see the back page declaring ‘UP YOURS FABIO’ and saying ‘Boring Italian won’t dampen spirits for our Lions this time’.

Did somebody call a u-turn?

This is England
Now we’re not saying that The Sun are setting Gareth Southgate up for a fall, but their Monday edition contains an eight-page special on the England manager, using a 1995 picture of Southgate stood next to a tattered goalpost on the front page of the pull-out.

‘Hopefully, it will be ticker tape rather than sticky tape on show when he brings his squad home from Russia.’

Reminder: England are joint 12th in the FIFA rankings.

Who else suspects that things are going to get real ugly when England lose in the second round?

Now you might think that A would be for Aston Villa, C for Crystal Palace and M for Middlesbrough, but then you are a) a fool and b) probably not as cockney as Andrew Dillon.

Because of course C is for Car Boot Sale, which comes just after B for Barnet. Did he play for Barnet? Did he balls. But he ‘made sure that he spent the weekend having a pre-World Cup haircut as part of his own series of preparations’.

Might they? But they haven’t actually played. Which is a bit of a bugger when you write exclusively about Manchester United for the Manchester Evening News.

But you know who did play? England, that’s who.

Now you might be thinking that the only United players in England’s starting line-up were Phil Jones and Marcus Rashford, neither of whom played on the left, but that does not stop Richard Fay.

‘Mourinho should take encouragement from the partnership Marcus Rashford and Danny Rose have established at international level.’

They have started only two England games together, Rashford does not play on the left for England and, well, Danny Rose does not actually play for Manchester United but, go on…

‘Rashford was given a free role on the left, which often saw him take up a central role as well as switching over to the right – from where he scored a stunning opening goal.’

Erm, he wasn’t ‘given a free role on the left’, he was ‘given a role as a striker and allowed to roam’. Take a look at the average positions of the players during that game and tell us that Rose (3) and Rashford (19) have ‘formed a partnership’.

Just caught up with England average positions from Costa Rica game. A lovely neat 3-5-2 that. pic.twitter.com/nzWnTWDoMl

Still, Jose should definitely ‘take encouragement’ from the performances of a player he rarely plays and one he doesn’t own while playing in a system he does not play.

Recommended reading of the day
Nick Cohen on the World Cup.

Will Unwin on Lionel Messi.