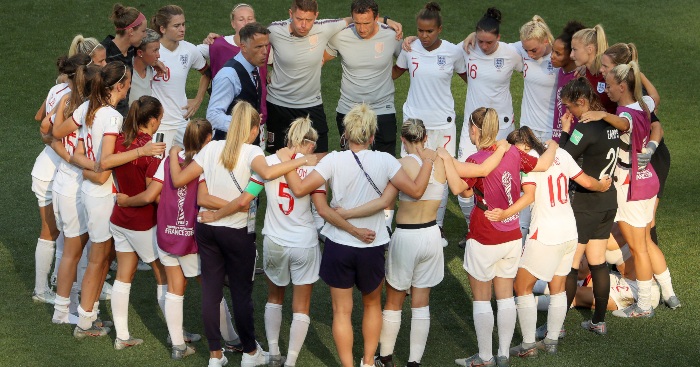 The Women’s World Cup concluded on Sunday with the United States triumphing in the final over Holland. England enjoyed a hugely creditable campaign – even if Phil Neville isn’t so sure – by coming fourth following defeat int he third-place play-off in Nice.

Karen Bardsley: Made some very good saves as well as having the odd shaky moment. Missed the 2-1 defeat to the United States in the semi-finals due to a hamstring problem and also subsequently sat out the third-place play-off – 7/10.

Mary Earps: The only member of the squad not to feature in any match during the campaign – N/A.

Carly Telford: Performed pretty commendably across her three appearances. The first of those, in the 1-0 group-stage win against Argentina, was a World Cup debut for Telford after being an unused squad member through two previous tournaments – 6.

Millie Bright: Looked as reliable as ever at times, and unconvincing at others. Injured her shoulder in the group stage and was sent off in the semi-final – 6.

Lucy Bronze: The right-back frequently demonstrated her class, most memorably in the 3-0 quarter-final victory over Norway that saw her set up the opener, have a hand in the creation of the second and then score the third with a stunning strike – 8.

Rachel Daly: Played well in an attacking role as England completed their group matches by beating Japan 2-0, then had less of an impact when she came back into the team in the semi-final – 6.

Alex Greenwood: Made some eye-catching contributions in attack, including scoring as Cameroon were beaten 3-0 in the last 16, and had some suspect moments defensively, with her attempted clearance teeing up Sweden’s first goal in the play-off – 6.

Steph Houghton: The captain – one of Johnny Nic’s heroes – produced some fantastic work at the back and also got on the scoresheet, against Cameroon. Her only really notable negative moment was a significant one – having a late penalty saved in the semi-final – 7.

3 semi final defeats in a row is heartbreaking! Congrats USA!
Forever proud to lead my unbelievable teammates, to work with an immense group of staff + our boss!
Thank you for your amazing support, we continue to change attitudes + to inspire young girls/boys!
1 more to go 🏴󠁧󠁢󠁥󠁮󠁧󠁿 pic.twitter.com/faNIKZM64i

Abbie McManus: Delivered a very composed display against Argentina after being brought in for Bright, and also started against Sweden – 6.

Demi Stokes: Began the tournament nursing an injury and went on to play three times. Did not react quickly enough for the cross when the US made it 2-1 in the semi-final – 6.

Leah Williamson: Made her only appearance when she came on in the 84th minute against Cameroon – 5.

Karen Carney: Slotted in well when coming off the bench in the group stage and the play-off game. She won her 144th and final England cap in the Sweden match, having announced on the eve of the contest that she would be retiring afterwards – 6.

Jade Moore: Did a quietly efficient job in the middle of the park at the times she was called upon, whether from the start or off the bench – 6.

Jill Scott: The tall, energetic 32-year-old showed she is still a key player for her country. Became the player to have made the most World Cup appearances for England in the Cameroon game, surpassing Peter Shilton – her tally now stands at 21 matches – 7.

Wow thanks so much! Most importantly we won but to recieve this message from you an absolute legend it means the world 👍🏼 https://t.co/7KvyXO6J43

Lucy Staniforth: Like Williamson, made her sole appearance as a second-half substitute against Cameroon – 5.

Georgia Stanway: The PFA Young Player of the Year made a very positive impression in the one game she started, the win against Japan that saw her set up the first goal – 7.

Keira Walsh: While she had some struggles, the 22-year-old also demonstrated her fine passing ability – 7.

Toni Duggan: Came into the team for Beth Mead after sitting out the first two games with a thigh issue and did well in the win against Cameroon before being dropped for the semi-final – 6.

Fran Kirby: Some nice involvement in build-up play but overall may feel like she has not had the impact she would have hoped for. Scored a good goal in the Sweden match – 6.

My heart is heavy. We gave everything, and to leave empty handed is horrible.
But I want to take this time to say thank you to EVERYONE who has supported us back home, who has watched us play and has pushed the women’s game to a new level. Thank you ❤️ pic.twitter.com/kstJSVvTH3

Beth Mead: Responded well when given the chance after losing her place to Duggan, setting up goals in both the quarter-final and semi-final to take her assists tally at the tournament to three – 7.

Nikita Parris: Has had a mixed time of it. Looked very threatening on occasions and scored a penalty in the opener against Scotland, before having two further spot-kicks saved – 6.

Jodie Taylor: Made her mark with the winner against Argentina, the Euro 2017 top scorer netting an international goal for the first time in 14 months – 6.

Ellen White: Superb. Registered six goals and was unfortunate not to have scored more – 9.

When I look back on this tournament my overriding emotion is that of pride! Pride in this @Lionesses team and playing for my country 🏴󠁧󠁢󠁥󠁮󠁧󠁿 Thank you so much for your support, it means the world 🤓 #DareToCreate #Lionesses pic.twitter.com/1gM6RzO9ei