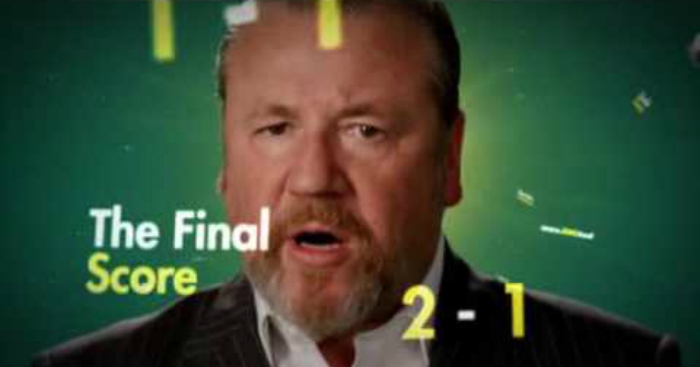 For many of us today, football and gambling go hand in hand. In play betting, accumulators, Ray Winstone screaming at you during the adverts…it’s hard to remember a time when these things didn’t accompany every match.

While some can turn a blind eye to the advertising being rammed down their throats, others cannot, and this barrage of betting odds is creating a culture where gambling on football is so normalised that 35% of young people admit that the content of an advert prompted them to make a bet. And with the advancement of at-home technologies, making a bet has never been easier. Most people are rarely without their smartphones, and the proliferation of apps and mobile websites has made reactionary betting incredibly simple.

It’s not just the television adverts either. The entire English Football League is sponsored by SkyBet, and now every team have to wear their logo as an arm patch. Nine of this season’s Premier League teams are sponsored by betting companies, as are 17 of the 24 Championship teams – five of which are sponsored by the same company!

Everywhere we see a football shirt – in the shops, at the grounds, on posters – it is spreading the message of gambling. And when you consider that many of these shirts and posters belong to children, you really have to question the integrity of the entire operation.

But how did this happen?

It wasn’t sudden. Gambling and sports have always gone hand in hand, starting with horse-racing and gladiator duels in Roman times. Football made its first foray into the world of wagers with the introduction of football pools in 1887. Back then they were designed as a way to enhance spectators’ enjoyment of the game; if you were going to watch the match anyway, why not try and win a few pennies? But all you were betting on back then was the score – now the bookies give you so many options, from first goals to the number of corners taken, that placing multiple small bets on a game has become so stressful, many struggle to watch an entire match.

Much is to do with the changes in how advertising is regulated. In the 1980s and 1990s it was equally commonplace to see alcohol and tobacco company logos. But when their advertising was restricted, a gulf in the market opened up. Football is a multi-billion pound industry, and sponsorship has always played an important part in its funding. Without their money, clubs would struggle to buy and develop players of the high standards which make the games so exciting. And when gambling advertisements were deregulated in 2007, it opened the doors for the hugely successful and profitable businesses to reach out into this new marketplace.

And it’s not just that gambling is bleeding into the realms of the sport – football inspired games are becoming increasingly commonplace online. For football fans who want to do more than just bet on a game, there are football-themed online slot machines, football prizes, and giveaways as bonus jackpots. Many online casinos have also started to copy the betting sites by offering free registration, slots no deposit bonus and free spins in order to tempt football gamblers to try their games.

But the Government are becoming increasingly concerned about the effects that so much gambling advertising is having, not only on young adults of today, but their children too. Football is often a family affair, with matches watched by youngsters of all ages. During the recent World Cup, gambling companies were advertised more than any other product – almost 90 minutes’ worth in total. That might not sound like a lot, but remember that adverts are typically 30-60 seconds long. It all adds up.

As a result, new regulations have been brought into place which prevent gambling adverts during football matches from mentioning in-play betting. The Government hopes that this will stop viewers from reaching for their phones and placing impulse bets. The SkyBet arm patches that the players wear now include the slogan ‘when the fun stops, stop’…although you’d struggle to read it from a distance. But while the entire league continues to be sponsored by a major gambling firm, you have to question whether these restrictions are enough to stem the growing rise of gambling addictions.

Even the players themselves aren’t immune to the lure of gambling. Although professional football players aren’t legally allowed to place bets on football matches because of a conflict of interest, they are so enmeshed in an industry which seems to not only accept, but promote the culture, that many find ways around the rules.

There have been several high profile cases recently, including those of Joey Barton and Dietmar Hamann, where players careers and personal lives, as well as their finances, have been irretrievably damaged by gambling. In fact, a study by the Professional Footballers’ Association – a national organisation that works for the benefit of all sporting professionals – showed that sportsmen are three times more likely to become problem gamblers than the general public.

With pressure coming from all sides, it can only be a matter of time before the EFL is forced to rethink their relationship with the gambling industry: and maybe show them the red card. Although it has been a partnership that worked well financially, many would consider there to be too much collateral damage for it to continue unrestrained. Yes there may well be a place for gambling advertising in football – it is a legal pursuit after all.

But with both players and spectators claiming that the gambling culture surrounding the sport makes them feel compelled to take part, perhaps the scale of the advertising needs to be addressed. League and shirt sponsorship might have to take a backseat to pitch-side boards and in-program adverts. We have already seen the damage alcohol advertising has done to a generation of footballers, fans and the English reputation. We must hope the sport reacts in time before gambling has the same effect.