Home Competitions Championship Swansea City How has Carlos turned the Swansea ship around? 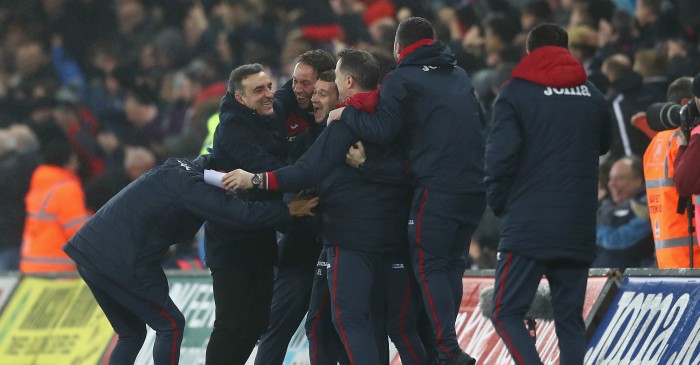 There’s a Category 4 Narrative Alert going on in south Wales, where Carlos Carvalhal has yanked Swansea City out of a Clement Coma and brought them back into the survival race. The Swans have put together a remarkable string of results, picking up ten points in five matches, and making the Liberty Stadium a place to watch football rather than plan your funeral.

All of which is undeniably true. But before the Category 4 swells to a Category 5 and even beyond, let’s try to take a sober look at exactly what’s been happening – not in any way to diminish Swansea’s considerable achievements, but to put them into context.

First, let’s look at their schedule. Of the five games they’ve played under Carvalhal, three have been against teams on a strong general downward trend: Watford, Newcastle and Arsenal. The other two were against Tottenham and Liverpool. They lost the first, and the second was one of those crazy games we’ve seen a million times, where the side with 21 shots gets zero goals, and the side with three shots gets the one goal they need, on a set-piece of course.

But, you say, under Clement they probably would have lost that match. Very true, which points to what looks like Carvalhal’s most important achievement: changing the attitude. Such things can be hard to measure, but one stat shows it very clearly. In five matches under Carvalhal, Swansea have gained six points from losing positions. That’s six more than they managed in 18 games under Clement.

But are they really playing that much better? I’d say no – at least up until last night. In the two matches against teams closer to their level, the performance was nothing special. Against Watford they were second best most of the afternoon, but the Hornets dallied and wasted opportunities, and Swansea turned a loss into a win with two late goals. Against Newcastle the opposition had much the better chances, and the Swans needed a strong performance from Lukasz Fabianski (one of many this season) to get the draw.

Against Arsenal, though – wow. That was no fluke. Swansea defended well and counter-attacked well, and while the Gunners made some big mistakes they were largely outplayed. The 3-1 scoreline in no way overstates the performance. But three things to remember: 1) It’s only one game; 2) Swansea have been a bit of a bogey side for Arsenal in recent years; 3) Lads, it’s Arsenal.

Still, that match showed places where we can point to definite improvements, and they appear most clearly in three players: Mike van der Hoorn, Sam Clucas and Jordan Ayew.

Defence first. Until Carvalhal came along, van der Hoorn had done little to suggest he could be a regular. But against Spurs, Liverpool and Arsenal, he’s come into the side as a third centre-half, and played anything from solidly to superbly. He’s unlikely to supplant Federico Fernández or Alfie Mawson in a back four, but without him the side doesn’t beat Liverpool, and doesn’t embarrass Arsenal. With that kind of performance, Carvalhal might consider three at the back in away matches against mid-table teams, such as Leicester City this coming weekend.

Clucas has made progress as well. He’s a versatile player, but under Clement, he was neither fish nor fowl, unable to assert himself at either end of the pitch. But he’s started all five matches under Carvalhal, delivering one outstanding performance defending in the middle (vs. Spurs) and one equally outstanding match attacking on the wing (vs. Arsenal). He looks set to be a key man in the run-in.

The biggest improvement, however, has been in Ayew, now the number one striker. The Ghanaian has always had decent skills, and been one of the hardest workers in the side. But his tactical game has been substandard – many’s the time he’s dribbled into blind alleys, slowed down the attack unnecessarily, or taken a shot from a poor position.

But under Carvalhal he’s well on the way to being a different player. The three goals in five games speak for themselves, but more remarkable has been his awareness of what’s happening on the pitch. He seems more connected to his teammates, better able to look ahead in the play, more instinctive, more likely to lead. His dribbles are better judged, as witness the way he beat Shkodran Mustafi to the line in the play that led to Clucas’ clincher. If I had to point to the best sign for the Swans in the days ahead, I’d say Ayew.

So Swansea City are well and truly off life support, and the manager deserves plenty of credit. But now comes the hard part: keeping the psychological momentum going, while finding a tactical approach suitable against your direct relegation rivals. If Carvalhal can pull that off, and finish the season 17th or above, the narrative weather in South Wales will indeed be a perfect storm.