Home Mediawatch How Jurgen Klopp saved us from the Super League… 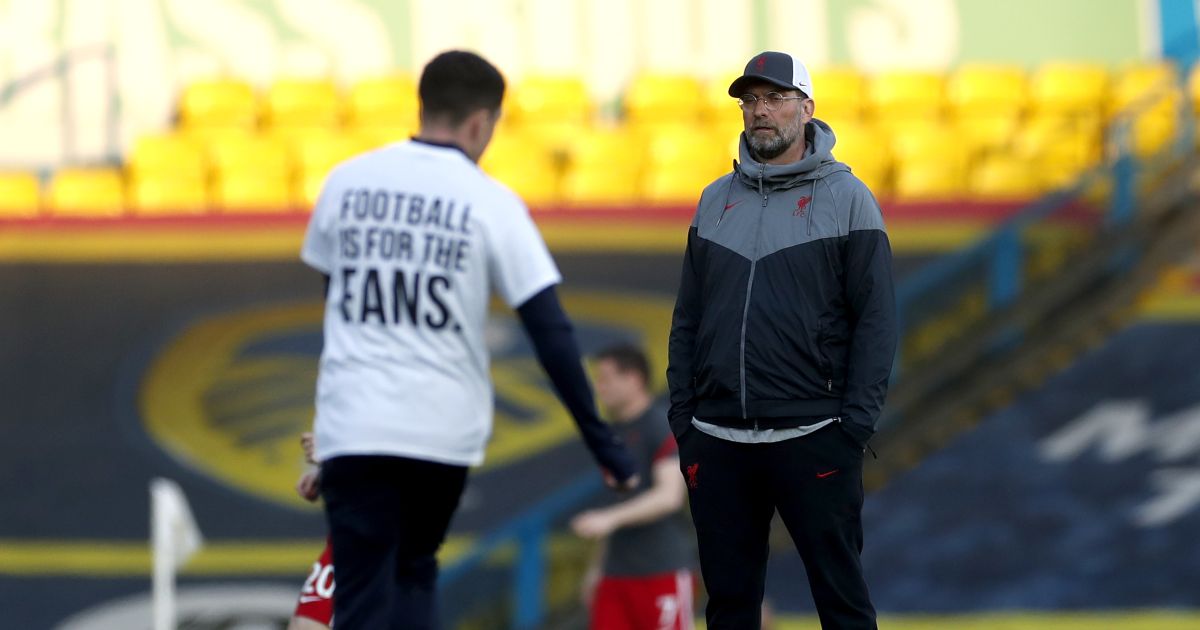 Those of you thinking that a massive fan backlash brought down the Super League are mistaken; it was all Jurgen Klopp. Oh and Edward Woodward is a victim in all this too.

(and all the other Premier League teams too, not just the ones whose fans still read The Sun).

Klopping flak
Over at the Daily Mirror website, they know that Liverpool and Jurgen Klopp are their bread and butter, so when Florentino Perez doubled down on his Super League nonsense on Wednesday night, they seized the moment:

Obviously, we are all pretending this week that Klopp came out fighting against the Super League, so this certainly fits with the narrative. The slight problem? Perez’s ‘dig at Jurgen Klopp’ was utterly unconnected to the Super League; it was just crowbarred in there for the precious, precious clicks.

The parable of Klopp
In the actual Daily Mirror, David Maddock is busy re-writing history in his piece about JW Henry, Liverpool and most importantly Jurgen Klopp.

We are promised the story about ‘HOW KLOPP & HIS TEAM DESTROYED EURO PLAN’ as if it really wasn’t anything to do with the fans or the media at all. And absolutely nothing to do with decisions at Chelsea and Manchester City forcing a climbdown across the board. It was all destroyed by Jurgen Klopp and his players. The whole shebang.

‘JW Henry kept even Jurgen Klopp in the dark about Liverpool’s shameless European plans…but when the Kop boss and his team courageously spoke out…the American knew the game was up.’

‘Courageously spoke out’? We presume that Maddock is writing about a private discussion here because Klopp did not ‘courageously’ do anything on Monday night on Sky Sports. He merely said that his opinion on the subject had not changed and then later – in a press conference – he said: “No, I do not think it is a great idea.”

And then he argued with Gary Neville and had a pop at Leeds United for their shirts. There was far more ire in those comments than in any reaction to his club’s Super League plans.

‘It was when Klopp and his most senior players showed the courage to question their paymasters, and speak out quietly but firmly against the plans, that Henry began to realise his game was up.’

Really? What was it about these words…

“I an here as a football manager. I will do that as long as people let me do that.

…that had Henry running scared? Klopp was diplomatic on Monday night; he absolutely did not publicly come out fighting against the Super League, as some would now have you believe.

‘When Klopp became the first major football voice connected to the Super League plan to speak out passionately against the idea, Henry must have known he had arrived at an impossible situation.’

‘Speak out passionately’? This is just weird now. That’s simply not what happened.

If ‘Klopp’s anger exploded’ (exploded!), then he kept it really well hidden on Monday night.

‘His conviction and his past statements meant he had no choice but to speak out against his bosses.’

By saying “I don’t think I am let down by FSG”? That must have taken some real nerve; that will have got them rattled.

We are then told that ‘others followed’. Well, what choice did they have? He is the messiah, after all.

‘Pep Guardiola was equally passionate in his condemnation, meaning the two most revered, famous managers in world football didn’t want to be inside the tent.’

Frankly, that is an insult to Guardiola, who genuinely did speak passionately, saying: “It is not a sport if success is guaranteed or if it doesn’t matter when you lose. I have said many times I want a successful Premier League, not just one team at the top.”

The idea that he was somehow emboldened by Klopp ‘passionately’ saying “no, I do not think it is a great idea” is frankly ludicrous.

Milk sheikh
Ian Ladyman of the Daily Mail in his column on April 22:

‘It rinses the reputation of despots.’

‘And yet the obscene amounts spent seem to be a source of pride.’

‘Somewhere along the road, the distorted view took hold that clubs need these people, though that was only because of the economics of a football industry that will pay a player £300,000 a week without batting an eyelid.’

‘Monday’s compelling Sky show told us that [Gary Neville] should be at the forefront of working out how football moves ahead. But no less important is how the wild spending and the money can be consigned to the past.’

Someone else by the name of Ian Ladyman, also coincidentally of the Daily Mail, in his column on April 21:

‘And Manchester City will genuinely be able to say that they were the ones who helped save English football.’

Ha ha ha ha. Thank you so much for putting out that raging fire you helped start.

Tom Collomosse’s match report for the Daily Mail on the win over Aston Villa tells us.

‘How City would love to follow up turning their back – albeit belatedly – on the Super League by winning the prize its architects wanted to ruin.’

And that they wilfully engaged in. Did those ‘architects’ force the poor billionaires to sign a contract?

Then over at the Manchester Evening News, Stuart Brennan is predictably quick to jump on Florentino Perez’s quotes about “one of the English clubs who didn’t seem so interested and that spread to the rest”.

The team in question is surely City but Brennan lays it on thick, describing them as ‘reluctant’ four times and ‘the last to join and the first to leave’ twice.

‘Perez’s words give truth to City chief Ferran Soriano’s assertion, in his apology to the fans, that the decision was taken in good faith, and only because they feared the alternative was to be left out in the cold.’

At least the decision to participate in a breakaway competition which could have destroyed the very foundations of the English football pyramid was ‘taken in good faith’. That sure is a relief.

There is further talk about ‘mitigating circumstances’ and how ‘Perez has inadvertently begun that healing process’ with regards to Manchester City’s owners and the fans. There is little explanation beyond ‘fear’ as to why these adult humans joined a ‘doomed project’ in the first place, nor why attempts to even vaguely absolve them of any blame whatsoever are still being made. 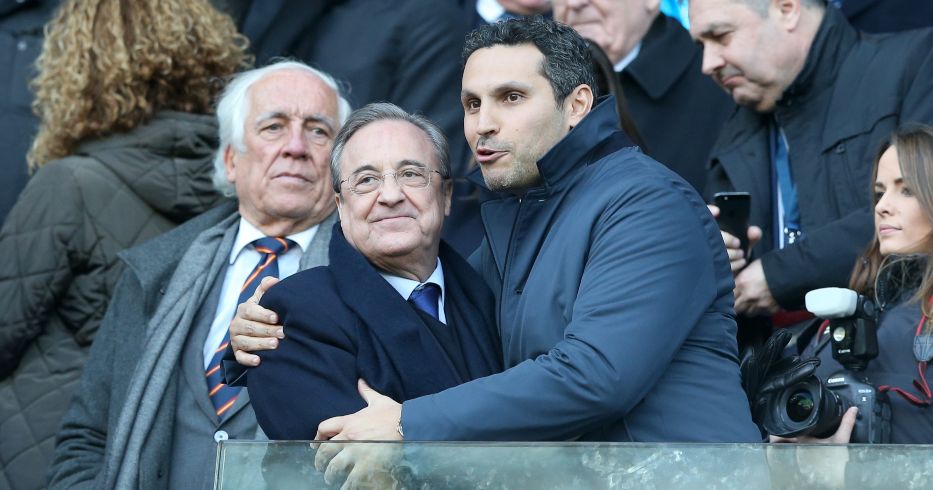 Woodwouldn’t
On the back page of the Daily Mirror, Jeremy Cross has an ‘exclusive’, in which Ed Woodward (previously described by Cross as ‘a genuine bloke’ after a personal act of kindness towards him) is said to have ‘quit Manchester United after refusing to back the Glazers’ European Super League proposals’.

Which makes Woodward seem very principled indeed until you read the second paragraph, in which it’s conceded that ‘Woodward originally supported the ESL plan but changed his mind once he witnessed the huge backlash’.

‘Originally supported’? He was described by Cross’s colleague David McDonnell on Tuesday night as ‘one of the main drivers of the contentious ESL proposal’. And now he expects credit for ‘refusing to back the Glazers’ European Super League proposals’?

A certain PR man is earning his money this week.

PRopaganda
The Guardian‘s Jamie Jackson has written a book called ‘The Red Apprentice: Ole Gunnar Solskjaer: The Making of Manchester United’s Great Hope’, so asking him to write a piece about Edward Woodward – the man who appointed said ‘Great Hope’ – inevitably leads to some of the greatest twaddle of our time.

Is it? They’re 11 points behind Manchester City.

‘Ed Woodward, Manchester United’s most powerful executive: was he a success or failure in his time in the role that began in May 2013 and will end at the close of this year?

‘One answer is somewhere in between for the man who (almost certainly) failed to oversee a league title but who has turned United into genuine contenders for a 21st crown.’

Has he? They’re 11 points behind Manchester City and the early title odds for next season have United as fourth-favourites.

‘An irony is United, eight points behind City, have moved closer in the past two seasons. So just as Woodward departs, the holy grail again seems possible for the first time since Ferguson departed.’

‘Moved closer in the last two seasons’? They finished 33 bloody points behind Liverpool last season; that’s further away from the title than at any point since Sir Alex Ferguson retired. They have clearly improved this season – helped by Liverpool’s unexpected combustion – but ‘the holy grail again seems possible’? Does it f***.