Home F365 Features How long can Sevilla hold off Barca and Real Madrid? 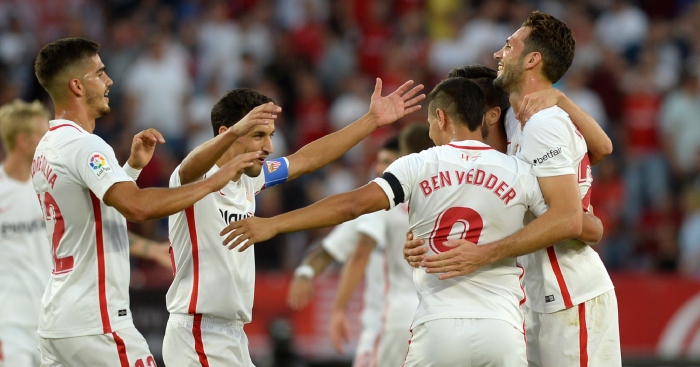 It’s been another crazy weekend in La Liga, and the madness is starting to be reflected in the league table.

It’s very tight – tighter than it has been at the same stage of the season at any point this century, in fact – and there are some surprising names near the summit.

After eight games, only two points separate the top six. Bottom side Huesca are just 11 points behind the leaders (which makes their decision to sack manager Leo Franco on Tuesday all the more ridiculous), and those leaders are surprisingly not drawn from the select band of three that have dominated Spanish football in recent times.

In normal circumstances, October would see Barcelona, Real Madrid and often Atlético Madrid starting to pull away from the pack.

But not this year. And that is due in no small part to a concurrent run of terrible form that is being suffered by both Real Madrid and Barcelona.

Just four months have passed since Real Madrid lifted the Champions League trophy in Kiev, with Zinedine Zidane in the dugout and Cristiano Ronaldo leading the charge. Things are very different now. Zizou and Ronaldo have flown the nest and Real Madrid are struggling.

The lowest point of a season of lows came on Saturday with a 1-0 defeat to Alavés at Mendizorroza. They looked to be heading for a dispiriting 0-0 draw, but a 95th-minute winner from Manu García turned it into a disastrous defeat.

Alarmingly, they now haven’t scored in nearly seven hours of football in all competitions, and have dropped points in four of their last five league games.

There’s a lot of talk that manager Julen Lopetegui ‘no se comerá el turrón’, meaning he won’t last until Christmas, and reports that club president Florentino Pérez will spend the money earmarked for a new striker on a roof for the Bernabéu have been met with anger from Madridistas.

The likelihood is that Lopetegui will be given until at least the clásico on 28th October to save his job, and if he survives he may owe it to the fact that his opponents are struggling just as badly.

Barcelona’s 1-1 draw with Valencia on Sunday is by no means their worst result of the season so far given the quality of their opponents, but it is the latest in a run of disappointing results that has seen them take just three points from their last four games.

Once again, they were shambolic in defence, with Gerard Piqué and Thomas Vermaelen conspiring to gift Ezequiel Garay the easiest of openers after just two minutes. As is so often the case, they had to rely on a moment of magic from Lionel Messi to get them back into the game when the Argentinian created a first-half equaliser out of thin air.

The draw leaves the Catalan side second on 15 points, one point ahead of Atlético Madrid and Real Madrid in third and fourth respectively.

Atleti are starting to find their stride after a mediocre start to the campaign, and a 1-0 win over Real Betis on Sunday courtesy of Ángel Correa’s smart finish means they have now gone five games without defeat.

The biggest winners of the weekend are undoubtedly Sevilla, who continued their fine start under new manager Pablo Machín with a 2-1 home win over Celta de Vigo. That win makes it four wins on the spin for the Andalusian side, and their good form has seen them rise to the very top of the table.

Interestingly, they had the same number of points at the same stage last season, but were down in fifth place, six points behind leaders Barcelona. But despite the points total being the same, they seem to have improved in a way that is unquantifiable. The new manager has instilled an identity in the team, and there is a positivity around the club that was missing last year. Although they owe their place at the top of the table to the poor form of bigger clubs, there seems to be a feeling that they belong at the top end of the table, duking it out with the top sides.

Two unexpected names complete the top six – the aforementioned Alavés, whose remarkable rise under Pitu Abelardo continued with one of the greatest victories in their history, and Espanyol, who beat struggling Villarreal 3-1 to continue a fine start that few could have predicted.

There is plenty of time left for the league to take on a more familiar shape, but for now it is refreshing to see it so open. La Liga is generally more competitive that some like to give it credit for, but there is no denying that it does tend to end up with the same winners come the end of the season.

What is certain is that teams are starting to identify the weaknesses of the top sides, and have become more adept at working out how to exploit them. There is a chance that this could be the beginning of a more general trend of greater equality in the Spanish league, but it is more likely that it is merely a freak coincidence that both major clubs are struggling at the same time.

The reality is that no other clubs can match their resources. Barcelona and Real Madrid can spend big in January to plug holes in their team, whereas other club can’t compete financially. Although the distribution of television money is fairer now than it ever has been, it is still weighted heavily in favour of the Barça-Madrid duopoly.

Until such a time as it is distributed evenly – as in the Premier League – the top sides will have an unfair advantage, and moments such as these with a wide-open playing field will remain scarce.

But that shouldn’t stop us enjoying it in the meantime, and it certainly won’t dampen the mood down in Sevilla.