Home Johnny Nic How long can sh*t be sold as sugar? 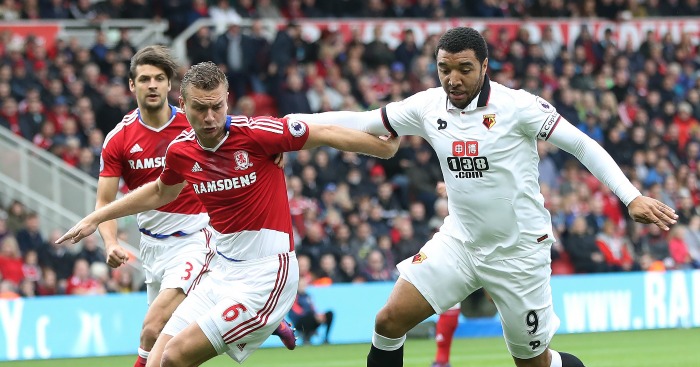 As I was watching Middlesbrough play Watford, desperately trying to grow an inner eyelid to protect my eyes from melting with boredom, I actually forgot it was a Premier League game. Okay, these things can happen at my age, along with feeling contempt at any man’s haircut under the age of 30, getting annoyed at people who pluralise the word vinyl, and having an inability to recall the name of someone you met this morning, but effortlessly remember the entire 1970 discography of Uriah Heep, including chart positions.

But then, it did just look so Championship. And not even a top of the Championship game. This looked like 15th v 12th. A lot of huffing, some puffing, and not a lot of anything else, except one good goal. The football was unsophisticated and dull. It was neither excitingly physical, nor wonderfully skilful. From start to finish, it was a grind. But when you grow up watching Middlesbrough, as I did, this is never a surprise. We’ve been a slave to the grind more years than not. It’s character-building and that’s why Teessiders have got more bloody character than they know what to do with.

This is my 50th year watching football. The first game I can recall seeing was the 1966 World Cup final. It’s been all downhill since then. But what I’ve learned in half a century is that football is great because it’s not great. By that cryptic aphorism I mean, it’s a lot of oysters but no pearls. Or, put yet another way, it’s only thrilling because mostly it isn’t. The best we can hope for is a couple of shards of lightning illuminating the overcast, grey skies of dullness.

I don’t mind that at all. I totally accept it. It is the nature of the beast.

However, let’s not forget something. This the best league in the world, or the most exciting league, or whatever superlative they’re all pushing today in order to justify their high wages. And when you’re falling to sleep watching Boro play Watford, you’ve got to ask yourself why on earth it is the richest league in the world, over and above anywhere else? What have we done? Why have we bought so much sackcloth under the illusion it is silk? Are we all fools? I don’t really mind Boro v Watford being seven shades of shazbat (the only Mork and Mindy reference you’ll read today), but I do mind being told this is an elite sporting experience and that fans of the clubs should be grateful to even be witnessing a Premier League game. And that happens all the time.

And let’s be honest, there are a lot of similar games every season; terrible football, terrible entertainment, terrible value for money. This is okay if it’s cheap. But it’s not. For some time now the top flight has been made up of about eight clubs worth watching and 12 teams who only now and again can deliver anything approaching entertaining football, on any level. In fact some of them, usually managed by Tony Pulis, are not really trying to. There are 12 every year who, when playing each other, just make your heart sink. WBA v Stoke City, urgh. Imagine sitting through Sunderland v Hull City? Please, make it stop.

It’s not always the same 12 every year,  obviously, but every year there are usually 12 real stinkers playing out game after game of poor quality dullness – dullness that is a long way from elite and much closer to lumpen.

It’s odd really because, to return to the likes of Pulis and Sam Allardyce and other purveyors of cold, lumpy mashed potato football, when fans get restless and want them booted out for crimes against their retinas, pundits, Paul Merson particularly, will look around himself in the peculiarly bewildered manner he has and say “be careful what you wish for”. The fans’ sanity is questioned for wanting some entertainment, because mere existence should be enough for you in the Premier League. “Would you rather be playing Rotherham or Barnsley?” is another common refrain in these circumstances. Well, frankly, after yesterday’s Watford game, yes I would, please. There’d be a chance of some goals and some fun. It wouldn’t be worse. It couldn’t be.

The Premier League’s persistent stain of stellar dull is excused on the basis that just surviving in the league is brilliant enough for these sides. Get your 40 points and stay up. Thus entertainment bending its knee to survival is actively endorsed, even though there seems little point in keeping on keeping on, merely for the sake of keeping on keeping on.

If hanging on in quiet desperation is the English way, merely surviving in order to do this all over again, ad infinitum, until we’re all dead, is certainly the Premier League way. And if that doesn’t make you feel thoroughly dispirited, then nothing will.

And as it turns out, the tide might just be turning in terms of people viewing football on TV, at least on Sky, whose viewing figures are down 19%. It’s too early to say if this is a blip or a trend, but let’s face it, if you persist in selling sh*t as sugar, at some point, someone will notice.

I’m sure the number of people watching the terrible 12 clubs on Sky or BT Sport is small and, were it not just available by default on your subscription and you had to make a choice to pay for it individually, almost no-one would choose to pay to watch, say, West Brom play Sunderland. The interest in many broadcast games just isn’t there. And yet the money still flows in.

I’ve had a Sky subscription for 20 years, but if it broke and I couldn’t get the football anymore, would my life be diminished in any way? No. I get BTSport for free with broadband, and I’d just listen to more radio. I’ve not really questioned the cost of it before now, but as prices keep going up, and the quality of the terrible 12, if anything, goes down, there has to be an admittedly arbitrary point at which it just feels like too much money for too little quality.

Football can be dull if it’s cheap; it can be expensive if it’s thrilling, but being both dull and expensive is surely unsustainable.