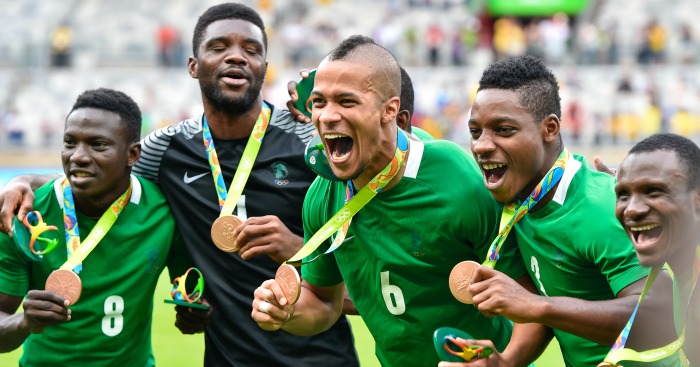 Ahead of the Rio Olympics Samson Siasia had a plan. The coach of Nigeria’s under-23 men’s football team organised a training camp for his squad in Atlanta to prepare for the tournament in Brazil.

The choice of the US city served a double purpose. Not only was it ideal because of its similar weather conditions but, twenty years earlier, it was the setting for one of Nigeria’s greatest footballing achievements. With the heroics of a Kanu Nwankwo-led team winning gold at the 1996 Olympics fresh in their minds, Siasia hoped the historic significance would inspire Nigeria to repeat the success.

If the idea made perfect sense, its execution was fatally flawed. Within days of arriving in Atlanta, the team faced the threat of ejection from their hotel over unpaid expenses. Back home the Sports Minister Solomon Dalung told the press he was unaware of their plight, effectively leaving the squad to their own devices. John Mikel Obi, the Chelsea midfielder and national team captain, stepped in to settle the costs out of his own pocket. His generosity wasn’t lost on his teammates.

“Mikel made sure the money was paid and he even stepped in numerous times with his own money to fund the team,” Nigeria centre-back William Troost-Ekong told The Set Pieces. Mikel has confirmed that he paid up to £30,000 to settle the outstanding expenses as Nigeria were left high and dry over travel arrangements, training facilities and even food and drink. “I said to myself, ‘I won’t let this happen. If I can help, I’ll try to help’,” Mikel told Goal.com.

It wasn’t exactly ideal preparation, but if the team thought their worries were over following Mikel’s intervention they were in for another shock. Nigeria had planned to fly from Atlanta to Manaus four days before their opening game against Japan. However, when the sports ministry failed to pay the airline, it led to multiple cancellations. At the last minute, Delta Airlines offered to help, and Nigeria landed in Brazil with just hours to spare before kick-off.

Somehow they defeated Japan 5-4, a victory that came despite the bureaucratic chaos that very nearly derailed their participation at the Olympics. “It was probably the worst match preparation anyone could have,” said Troost-Ekong. “For us to win that match by scoring five goals against all odds gave us a real belief that we could do anything.” Siasia’s side went on to secure their place in the knock-out stage courtesy of a 1-0 win over Sweden in their second game, before losing a dead-rubber to Colombia ahead of a quarter-final against Denmark.

Player discontent is a common theme among African teams competing at major tournaments, with bonus disputes often causing disharmony. Cameroon and Ghana astonishingly had cash flown out to them at the 2014 World Cup, while Nigeria’s Super Eagles boycotted training for a day before their round of 16 tie against France. The now infamous photo of defender John Boye kissing his own share of Ghana’s $3million bounty is the defining image of the country’s participation in Brazil.

An even more famous example is the Zaire player Mwepu Ilunga kicking the ball away as Brazil lined up a free-kick at the 1974 World Cup. Many attributed Ilunga’s actions to a lack of discipline or misunderstanding. Clarifying the incident in 2010, the defender stated that he did in fact know the rules, but he chose to kick the ball away in anger at the players being taken for a ride while those running the game were rewarded vast sums of money. For those on the outside, oblivious to the machinations of football on the continent, it’s often wrongly perceived that players allow greed to cloud their judgement. In reality, they have every right to demand recompense given the often deplorable conditions they are put in by the administrators responsible for making their jobs easier.

Following the disruption over unpaid hotel and flight expenses, the Nigeria Football Federation (NFF) were also forced to strenuously deny that the team had threatened to go on strike over bonuses at the Olympics.
The situation came to a head in the days leading up to the Denmark game when the squad failed to train. Despite talk of a strike being denied, Troost-Ekong confirmed the players had planned to drive home their point.

“Yeah those reports [of the planned strike] are correct,” he said. “We didn’t train the days before the Denmark game and the players were prepared to strike the game. It got resolved the night before the game so we still played and won. For me the money wasn’t going to stop me from playing, I came there for a medal. However we are a team and the majority chose to strike.”

Considering the many challenges Nigeria faced, it’s a miracle the team rallied to win bronze in Brazil. Had the competition been to determine the worst preparation, they would have easily taken home gold.
There is perhaps a lingering sense of regret, and Troost-Ekong believes the team could have performed better without the distractions: “Yes definitely, we could have done better. But it’s always easy to say that afterwards. The support that we got from the fans back home and in the stadiums in Brazil was a major factor for our success. They saw and read what we went through and got behind us so winning that medal for them was extra special.”

Mikel in particular came in for praise for his exceptional leadership both on and off the pitch. His actions somewhat contrast to his image as a peripheral figure at Chelsea but, without him, Nigeria’s participation would have been in serious jeopardy.

“Mikel is a football icon for Nigeria and a true leader,” said Troost-Ekong. “He was not only important for us in the Olympics on the pitch but off the pitch he fought for the players too. “He encouraged the younger players to grab this opportunity with both hands. To play with a player like that who has won so much already and to see his desire to win more is contagious and rubbed of on us.”

At the moment, Nigerian football is at an all-time low, having missed out on two consecutive Africa Cup of Nations and plummeting to 67th in the world rankings. German manager Gernot Rohr has recently been appointed to guide the Super Eagles through a tough World Cup qualifying group but, if the preparations for the Olympics are anything to go by, competing in Russia will be impossible.

There’s only so much shoddy treatment the players can take. It is thanks to their remarkable team spirit that Nigeria won bronze in Brazil.

This article first featured on The Set Pieces. Check it out, yeah?