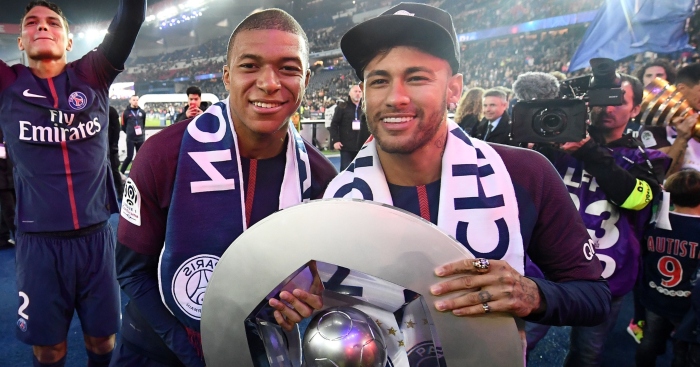 We last did this almost exactly a year ago. Since then, the collective value of these XIs has rocketed by £613.15million. PSG account for almost half of that amount…

The Premier League side shows the highest number of changes, with over half of the XI different to this time last year. Only two deals, though, have been arranged this summer, with the three new defenders signed in January or – in Mendy’s case – towards the end of last summer. Keita was arranged a year ago, meaning the only fresh deals are Alisson and Mahrez.

The La Liga XI features a new centre-half pairing and a couple of fresh forwards that were signed in January or towards the end of the summer window last year. Paulinho is also a new entry, even if he has already scarpered back to China. The goalkeeper is almost certain to change when Thibaut Courtois gets his move to Real Madrid, who could also give the attack a more expensive look before the window closes.

Ronaldo is the only mover this summer, with the three other Juventus signings having already been playing with the Old Lady for at least half a season. Buffon and Rui Costa have been stalwarts in this side for the last 17 years.

RB Leipzig provide the only fresh blood in this XI thanks to their purchase of a couple of still reasonably-priced full-backs. Other than that, it’s as you were in Germany until Bayern do something daft.

Ligue 1’s XI features the joint fewest changes but considerably the highest increase in value thanks to PSG’s splurge on Neymar and Mbappe last August. Somehow, Kevin Trapp, at £6.4million, keeps his place in goal despite being the only player of the 55 listed to cost below £10million. It can’t be too long before we see an all-PSG XI…