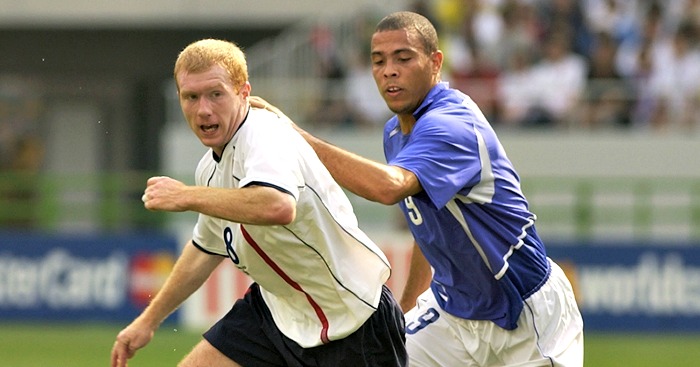 Danny Mills has explained how Paul Scholes helped get Ronaldinho sent off for Brazil against England in 2002.

Ronaldinho was dismissed in the World Cup quarter-final between England and Brazil in 2002, which the latter eventually won 2-1.

The 36-year-old scored a long-range free-kick in the game, but was sent off after 58 minutes for a foul on Mills.

In an interview with Stadium Astro, the former right-back explained the role ex-Manchester United midfielder Scholes played in the red card.

“He came in, it was a late challenge, he caught me, I went down and I was about to get up and Scholesy came over and tapped me and said ‘stay down, ref has got a card out, stay down’.”

“He pulled a red card out, it was never a red card, he caught me slightly, it was a booking at worst.

“What did I do wrong? It was a foul, I was on the floor, all he said was to stay down, I didn’t roll around squirming and squealing, I just stayed dead still.”