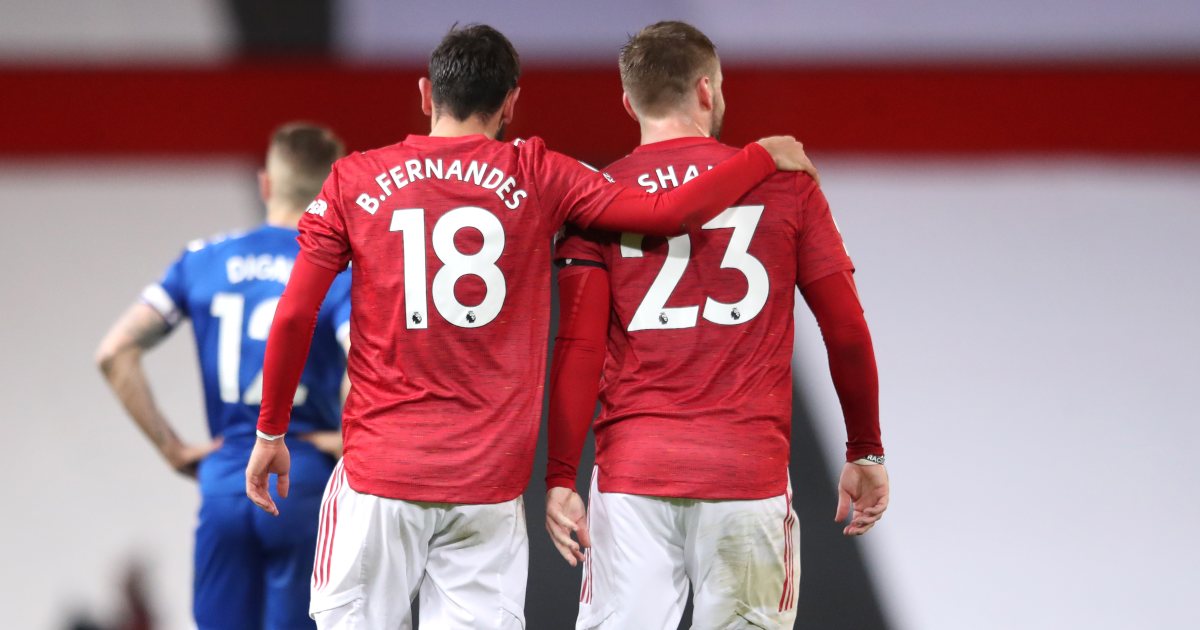 Bruno Fernandes is ‘stalling over a new deal’. Or something. But first…

Riddle me this
What do you get when you cross Gary Neville suggesting mid-game that Fabinho and Trent Alexander-Arnold might have “mixed up” who was marking Raheem Sterling and a days-old interview with Alexander-Arnold in which he admitted it had been a “tough season”?

A Mirror website headline of ‘Trent Alexander-Arnold “mix-up” at Liverpool spells more bad news after “tough” confession’ of course. What else?

We know we’ve let ourselves and the fans down today. No excuses. It just has to be better to finish the season strong. We’ll give it everything. #YNWA pic.twitter.com/C6QSqQWSbU

A Mirror website headline of ‘Trent Alexander-Arnold debunks Roy Keane’s Liverpool theory with social media post’, of course. What else?

Pressure…pushing down on me
Beautiful sh*thousery from The Sun website, who tell us that ‘Man Utd boss Solskjaer recalls outcasted goalkeeper Romero to 25-man Premier League squad to add more pressure on De Gea’ in an attempt to cash in on David De Gea currency after his mistake on Saturday night.

Which would be fine if the news did not actually date back to Friday and we all knew that Solskjaer actually recalled his outcasted (is that a word?) goalkeeper Romero because he lost Odion Ighalo, Marcos Rojo, Timothy Fosu-Mensah and Jesse Lingard and there were several spare places. Indeed, so many spare places that United have now only named a  23-man squad.

Timing is everything
And now to the Manchester Evening News, who bring is this doozy of a slug – https://www.manchestereveningnews.co.uk/sport/football/transfer-news/man-united-transfer-news-defender-19791038 – promising ‘transfer news’ not once, but twice. Now that’s how you react to a draw that feels like a defeat and the appetite for good transfer news that always follows.

‘Manchester United are monitoring targets with a view to reinforcing their central defence in the summer transfer window.’

No sh*t. United have the worst defensive record in the top half. If they were not monitoring targets with a view to reinforcing their central defence, that would be a far bigger story. It would also contradict this and this from the last week in which the MEN made it clear several times that United are intending to buy a centre-half this summer.

It’s not news. And they’re only trying to make it news because Manchester United drew 3-3 on Saturday.

‘The MEN understands United are open to spending a significant sum on a new centre half or a forward in the summer, depending on how they fare between now and the end of the season.’

Oh. Now they’re only ‘open’ to signing a centre-half. But they might sign a forward instead. And it ‘depends’ on how things go. Mediawatch understands that it’s all just a massive guess.

LIVE! THREE DAYS AGO!
The transfer window may be closed but there are still transfer clicks to be gleaned by the Sky Sports website, whose Transfer Centre trumpets this on Monday morning:

Well, today’s Daily Mirror says nothing of the sort, but well done for giving the story a LIVE! feel when actually, it’s Sunday’s story from the Mirror website, which was gleaned from Friday on Sport1. It doesn’t feel quite so LIVE! now, does it?

Bruno mars
You may have read that Ole Gunnar Solskjaer has been very circumspect when discussing the prospect of a title race – and that was before Manchester City beat Liverpool 4-1 to go five points clear with a game in hand.

But what you might not have realised – unless you looked at the Daily Express website – is that ‘Man Utd star Bruno Fernandes may see Ole Gunnar Solskjaer’s comments as a sign of weakness’. Well he ‘may’. There are a lot of things that ‘may’ happen.

‘Ole Gunnar Solskjaer may not like to admit, but Manchester United are very much in the title race and Bruno Fernandes will certainly see it that way.’

Are they ‘very much in the title race’ though? Or are they five points and one game adrift, with odds of 26/1 available on them winning the title?

‘They could – and should – have moved level with Manchester City at the top of the table on Saturday in their game against Everton.’

Ha. Well they could have done but they did not. And they would have moved level with City for less than 24 hours. And City would have had two games in hand. Apart from all that, we should basically hand them the title.

‘A stoppage time equaliser from Dominic Calvert-Lewin halted United’s celebrations though, leaving the Red Devils with just one win from their last four matches.

‘More telling for United was Solskjaer’s somewhat pessimistic comments following the match regarding their title chances.’

Erm, we think he might have been pessimistic because they have won just once in their last four matches, fellas.

Bruno mars again
The Express have clearly decided that there is mileage in hints at a rift between Bruno Fernandes and Manchester United. Presumably he is so pissed off with the pessimism that he will not sign a new contract a whole 12 months after he joined the club.

Their source: The Athletic on February 3.

And what do The Athletic say about the contract of a player that runs until 2025 and contains an option for a further year, effectively tying him down for the next five years?

‘A confident Fernandes has lifted United but trophies fuel his fire — that is why there is no rush from him to sign a new contract.’

And ‘no rush’ obviously means ‘stalling on a new contract’.

You absolutely know by now, of course, that the Express were only actually quoting themselves.

And we all know that the best way to deliver a damning verdict on somebody is to never actually mention them by name.

VAR from fair
Just to be clear, VAR is not synonymous with luck. So when The Sun say that Chelsea ‘needed the help of VAR to secure a winning penalty’, what they actually mean is that striker Timo Werner was cleared out by Aaron Ramsdale and Chelsea were awarded a deserved penalty.