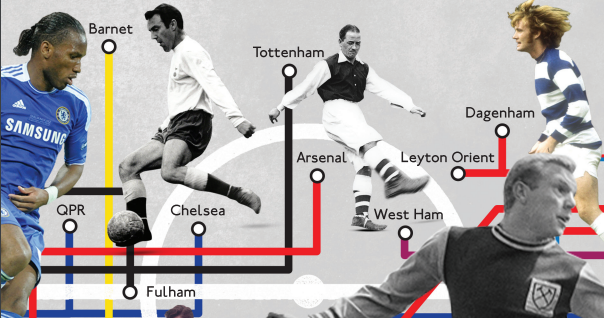 As Arsenal and Tottenham set off in their 104th season as unloving neighbours, this extract from Steve Tongue’s new book Turf Wars, A History of London Football recounts how the first of many territorial disputes in the capital began. Henry Norris, a politician and social climber with friends in high places, was a Fulham director who set his sights on moving the Gunners far away from their Woolwich home and making them if necessary the first Franchise FC. Having done so, he was about to upset Spurs even more in a manner they have never forgotten…

When Fulham met Arsenal in 1913/14 after the latter’s relegation, the Cottagers won a strange game 6-1, all seven goals coming in the last half-hour. The Arsenal, as they were officially known at that point, finished above Fulham and Orient in third place but the greater significance was that the former south London club now lived on the other side of the river.

The new home might have been Battersea, Harringay or even Fulham itself. In 1910 Arsenal’s debts prompted Norris, often ahead of his time, to issue a cheeky invitation to them to amalgamate with his club at Craven Cottage, and when that was ruled out, he suggested a ground-share, which was also turned down.

He appeared to believe that Arsenal had the better prospects and soon became their majority shareholder and then chairman, still remaining a director at Fulham, while his friend William Hall did the opposite: director of Arsenal, chairman of Fulham. Little wonder the links between the clubs were so close.

Norris, however, would begin to sever them. Faced with the prospect of Second Division football as Arsenal’s calamitous 1912/13 season drew on, he decided on equally drastic measures. ‘Supposing there was a place only ten minutes from Piccadilly where one could go and see a first-rate football match?’ he asked. In Islington, close to what was then known as Gillespie Road underground station, which had been opened in 1906, he found such a site, owned by the Ecclesiastical Commissioners (later the Church Commissioners).

Many Arsenal supporters who did not relish crossing London to watch their team were horrified. One of them, writing to the Kentish Gazette, used a phrase that would recur many years later in relation to another London club, who wanted to move much further afield: ‘You cannot “franchise” a football club,’ he insisted, ‘Woolwich Arsenal must stay near Woolwich.’

Tottenham and Clapton Orient, already within three miles of each other and fighting for local support, were naturally just as appalled by the prospect, but lost the turf battle, if not the war: a Football League meeting in March 1913 decided nothing in the existing rules could block it.

Norris triumphantly agreed a 21-year lease on the land, agreeing out of respect for the owners not to play on Good Friday or Christmas Day (a stipulation which stayed in place until Arsenal bought the freehold in 1925). The last game in south-east London was a 1-1 draw with Middlesbrough on 26 April 1913, watched by only 3,000. The first at the new home, back down in Division Two, was on 6 September, when a crowd more than six times larger saw Leicester Fosse beaten 2-1 in a stadium not quite finished. Dressing rooms were an important missing element.

One more point secured during the 38 games – from a 2-2 draw at home to Orient in April, for instance, watched by 35,000 – would have made it the most successful of campaigns, resulting in instant promotion. Crucially, however, Morrell’s team finished behind Bradford Park Avenue on goal average, thanks to the old failing of not scoring enough goals. That would lead indirectly to one of the great controversies of London football history.

By 1918 Henry Norris, a recruiting officer at the War Office during hostilities, had been knighted and become a Tory MP. Among his many friends in high places were the Archbishop of Canterbury, who personally signed Arsenal’s lease for Highbury, and the Football League president and Liverpool owner John McKenna, who would crucially help him and Arsenal at the 1919 league AGM, when the First Division was to be extended from 20 to 22 clubs.

For previous expansions – for example in 1898 and 1905 – the bottom club(s) had simply stayed up and two others were promoted. This time, Derby County and Preston duly moved up from the Second Division and Chelsea, bottom but one in the First Division, were immediately reprieved on something of a sympathy vote, clubs having remembered that Manchester United only finished above them by beating Liverpool in a match-fixing scandal that resulted in seven players being banned for life.

That left one place to be filled, which Tottenham felt should be theirs, despite having been bottom dogs in 1915. Instead, McKenna talked up Arsenal’s credentials as loyal 25-year members of the league and ordered a vote of all nominated clubs. To Norris’s delight and Tottenham’s dismay, it resulted: Arsenal 18, Spurs 8, Barnsley 5, Wolves 4, Nottingham Forest 3, Birmingham 2, Hull 1.

So Tottenham found themselves replaced in the top division by their new, unwanted local rivals, who had been no higher than fifth in the last season before suspension, with Barnsley and Wolves above them in the table.

This is an extract from Turf Wars: A history of London football, the new book by Steve Tongue and published by Pitch Publishing. It is available right here.