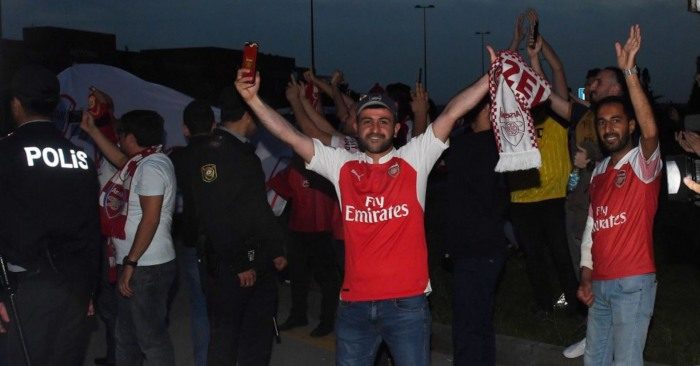 Once the final whistle blows in Baku and the trophy has been lifted, the heat will be drawn from this situation. It’s not right, but that’s how it works; once the game is over, all of football’s energy will be drawn towards Madrid and the Champions League final. The horror stories of missed connections and unending lay-overs will still leak back across social media, but nobody will be paying much attention. The issue will go cold.

UEFA’s party line during this episode has been to duck behind its scheduling. The decision to host the Europa League final in Baku was taken in 2017, when it would have been impossible to foresee two English clubs taking part. It’s not an excuse which bears much scrutiny. Travel arrangements would have been similarly taxing from Spain, France or Germany, and the chances of the two finalists being drawn from that collection of countries would have been very high indeed.

Back in 2017, at the point of application, UEFA published their evaluation report on each of the appellant cities bidding for the finals. It’s a dull and joyless read for the most part, but it still manages to be deeply depressing. The assessment of Baku’s suitability notes concerns about the local airport’s capacity and stresses the need for temporary measures to be implemented to deal with the influx of spectators. But the accommodation section is the most malignant.

‘The number of hotel rooms within a 60km radius of the stadium falls short of UEFA’s minimum requirements for a UEFA Champions League final and would allow the city to accommodate only a very limited number of fans and visitors, including UEFA’s key target groups in standard hotels. Mitigation measures such as camp sites, university dormitories or guests houses would need to be investigated.’

If there’s a passage which describes UEFA’s disinterest in match-going fans, then it’s that one. Irrespective of who the finalists were, the vast majority of supporters were always going to be excluded from the event and those who weren’t, if they were willing to pay the exorbitant airfares and able to take three days off work, were going to be left scrambling over scarce accommodation. Beyond any doubt, irrespective of any retro-fitted explanations, this was an event which was planned and plotted with a cavalier indifference to the fans.

The respective clubs’ response has been mixed. On May 16, Arsenal published a strongly worded letter to UEFA in response to their ticket allocation, imploring the organisation to properly consider travel logistics in the future. It was welcome, but futile, and really a rather passive response to a pressing issue with prohibitive time pressures.

Instead, the real retaliation came from a joint statement issued by the two supporters’ trusts, written and published five days before, and calling for a cap on future ticket pricing, ticket allocations which properly reflect the scale of the event, and consumer protection measures which prevent manipulated pricing. The statement also took aim at the two clubs themselves, highlighting that while both Arsenal and Chelsea could each afford to partially subsidise travel, they had each just herded their fans towards exorbitantly priced day-trip packages vended by their preferred travel partners.

This is what will endure. Not Arsenal’s letter, which achieved little and served little more than a PR purpose. Not Chelsea’s rushed response, because it came for too late and was only really a reaction to fan pressure. And it certainly won’t be UEFA’s devious response, in which they ludicrously cast this Baku final as an act of sporting evangelism and positioned themselves – in that smug, patronising way – as benevolent growers-of-the-game.

No, it’s been the fans. Increasingly, this seems like an age of ultra-tribalism, in which paranoia and anger are the main currencies. The first point to make, then, is to congratulate the two organisations on putting their rivalry aside for the greater good, and for approaching this situation with clear eyes. The second, however, is to celebrate their objectivity and their willingness to criticise their own clubs.

Yes, that is allowed. Actually, it’s necessary. Increasingly, modern fandom seems to come with the implication that the supporter is obliged to defend his or her club no matter what, over issues well beyond the pitch and, often, their understanding. Purchase the season ticket, buy the replica kit and then…earn a degree in international relations and explain away human-rights abuses and war crimes?

When did that become part of it – when did it become implied that being unwilling to morally perjure yourself was a strike against your loyalty?

This saga may not involve those kind of issues, but it has exposed an important truth: the fans are alone and all they really have is each other. Despite the wealth of their clubs and the many, many influential people who sit in their boardrooms, when these kind of issues arise they have to be pushed to the crease and forced to go to bat for their public.

In a different year, without this Europa League controversy, the Champions League final would be under similar scrutiny. Madrid’s transport links are comparatively superior and the accommodation is apparently more suitable. Nevertheless, the prohibitive pricing and meagre allocations are just as scandalous. Although not in the same volume, supporters who have spent years accumulating loyalty points are still being locked out of the event, and those lucky enough to get tickets are still being shaken by the ankles and held to financial ransom by the emotional pull of an occasion which presents itself, in Tottenham’s case at least, once in a lifetime at most.

The heroes, again, have been the supporters’ groups. Again, the rivalry was suspended and the two respective Trusts pooled their authority. Writing to the various Champions League sponsors, Spirit of Shankly and THST made a valiant appeal for the release of more tickets.

‘We ask Nissan, Playstation, Gazprom, PepsiCo, Banco Santander, Mastercard, Heineken and Expedia Group to help redress the balance in the current unfair allocation that sees fans of the competing clubs receive less than 25% of the available tickets.

‘As major sponsors of the UEFA Champions League, we know these companies appreciate the passion and dedication of the fans who follow their teams and make every game such a spectacle.’

At the time of writing, the only response received has been from Mastercard, who just said no. Logistically, perhaps that’s understandable, but the lack of communication from the other companies is incredibly disrespectful.

The hypocrisy is galling; fandom is wonderful and priceless when it matters, but not worth even a cursory response when it gets in the way. Any one of those companies could have spun a creative solution out of this situation – perhaps by funding a fan experience viral which served their businesses interests and created a net profit – but among all the executives within all of those marketing departments, there wasn’t so much as a flicker of benevolence.

After Tottenham’s qualification for the final, when it had become clear that hoteliers and the airlines operators  were treating the occasion like the lottery win, the THST board wrote an open letter to the club, asking them to use part of the revenue earned from the tournament to subsidise travel to the final.

Tottenham declined, reasoning that to do so would be to remove the pressure on UEFA, diluting the incentive to re-evaluate their ticketing policy. To Spurs’ credit and at the Trust’s urging, the club have extended the season-ticket renewal deadline beyond the end of the month and, for most fans, that will prove a significant gesture.

But the conclusion which is hard to shake is that all of this should be common sense, that these are very human concessions which should have been offered, rather than extracted. In each case, with all four clubs, the example has had to be set from the outside, by unpaid volunteers creating an accountability which wouldn’t otherwise exist. By fans looking out for other fans. Would Chelsea have made any comment at all had they not been compelled to do so? Would Tottenham have extended that ticketing deadline if it wasn’t presented as a zero-cost alternative to something more meaningful?

If that request to those Champions League sponsors had come from a chairman or owner, or even a communications director offering some sort of payment in kind, would it still have been ignored? The answer may still have been no, but there would have been some reassurance just in the attempt.

These clubs have an insatiable appetite for money and when it comes to pricing their own product, no mark-up is too great. When the roles are reversed, though, and when the opportunity arises to score some easy goodwill at minimal cost, the same organisations roll pound coins around like manhole covers. They’re all powerful, doing exactly what they want all the time. Right up to the moment it doesn’t serve their interests or relationships to be so strident, at which point they become completely impotent.

So, yes, UEFA are the protagonists within this saga, they are the true villain and of that there’s no doubt, but if these supporters’ groups weren’t willing to pick up sticks and stones, just how much resistance would they actually be facing?