Home F365 Says How do you solve those problems with Teixeira? 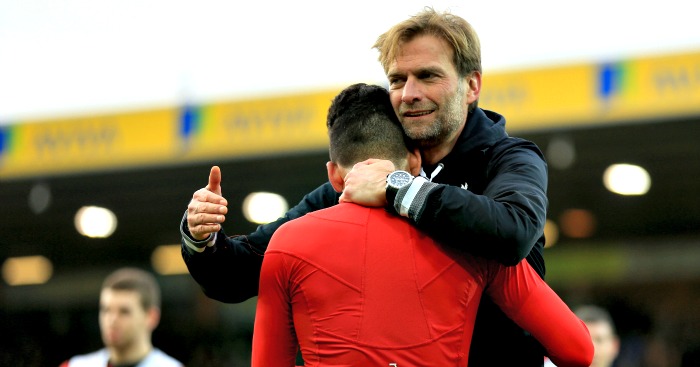 It was never meant to be like this for Jurgen Klopp. He and Liverpool were a perfect match, two soulmates whose paths were destined to coincide eventually. Klopp was the man to rescue the Reds from the tenure of Brendan Rodgers, to inspire Liverpool and restore glory to Anfield.

Such reactions were always fanciful; Klopp was never the saviour, and it would always take time for his methods to garner a lasting positive effect. These are not his players. These are not familiar surroundings. The German is just three months into a three-year contract, and expectations are revised on a week-by-week basis. His is a long-term mission.

But it was never meant to be this difficult in the short term. Victory at Carrow Road by the most narrow of margins, and in the most dramatic of fashions, fails to hide a growing list of deficiencies. The Reds are now just five points behind the top four, albeit having played one game more. Yet while Klopp failed to disguise his outpouring of relief after Adam Lallana’s last-minute winner, it’s difficult not to think that he has underestimated the magnitude of the task that faces him.

If asked to pinpoint Liverpool’s main problem, where would you start? With Simon Mignolet, who had conceded six goals from the last eight shots on target he had faced after Wes Hoolahan’s penalty made it 3-1 to Norwich? The keeper has now conceded 32 goals in the Premier League, making only 43 saves. Of all keepers to have made more than eight appearances this season, he ranks 21st out of 22 for shots saved per game. A new five-year contract for you. Keep up the good work.

Perhaps in defence, where Nathaniel Clyne continues to labour on the right, where Alberto Moreno excels in attack but struggles in defence on the left, and where Mamadou Sakho and Kolo Toure failed to deal with a striker who has four Premier League goals to his name. Just six sides have conceded more often than the Reds this season.

Maybe in midfield, where Emre Can, Jordan Henderson, James Milner and Lucas Leiva lost possession a total of 67 times, each failing to record a passing accuracy above 81%. The striking position will certainly be the least of Klopp’s worries, with Roberto Firmino continuing his fine form. Christian Benteke has some fight to earn his place back.

Where Klopp is concerned, Liverpool’s main weakness is clear. “We had a lot of problems in the game,” he told BT Sport after the game. “Set play, set play, set play, set play, and the game changed a little bit. It’s crazy what we are doing there.” Norwich had three corners, the first of which brought Diumerci Mbokani’s equaliser to make it 1-1. Sebastien Bassong’s strike in stoppage time to level the scores at 4-4 came from a free-kick which Liverpool failed to clear.

8 – Liverpool have conceded a Premier League-high eight goals from corner situations in 2015-16. Sloppy.

The statistics will say Norwich had one penalty at Carrow Road, but it may as well have been two. Each corner Liverpool concede is greeted with apprehension and fear from their players, while the opponent senses an opportunity. “We have to solve this problem. It’s really rubbish what we are doing,” Klopp continued with regards to set-pieces. Simple.

There were positives at Carrow Road. Firmino now has four goals and one assist in his last three games, and the Champions League places are just five points out of reach. The previously profligate Reds have now scored more goals than 12 other sides. So why sign Alex Teixeira?

With one week of the transfer window remaining, the Reds have reportedly bid £24.6million for the Shakhtar Donetsk star, and are willing to pay more. The 26-year-old will not make Mignolet a competent goalkeeper, he cannot salvage a troubled defence, and he is not capable of improving a struggling midfield. Teixeira may be an excellent player, he may not be. But his signing would simply add a new problem for Klopp to contend with. He has more than enough of those already.