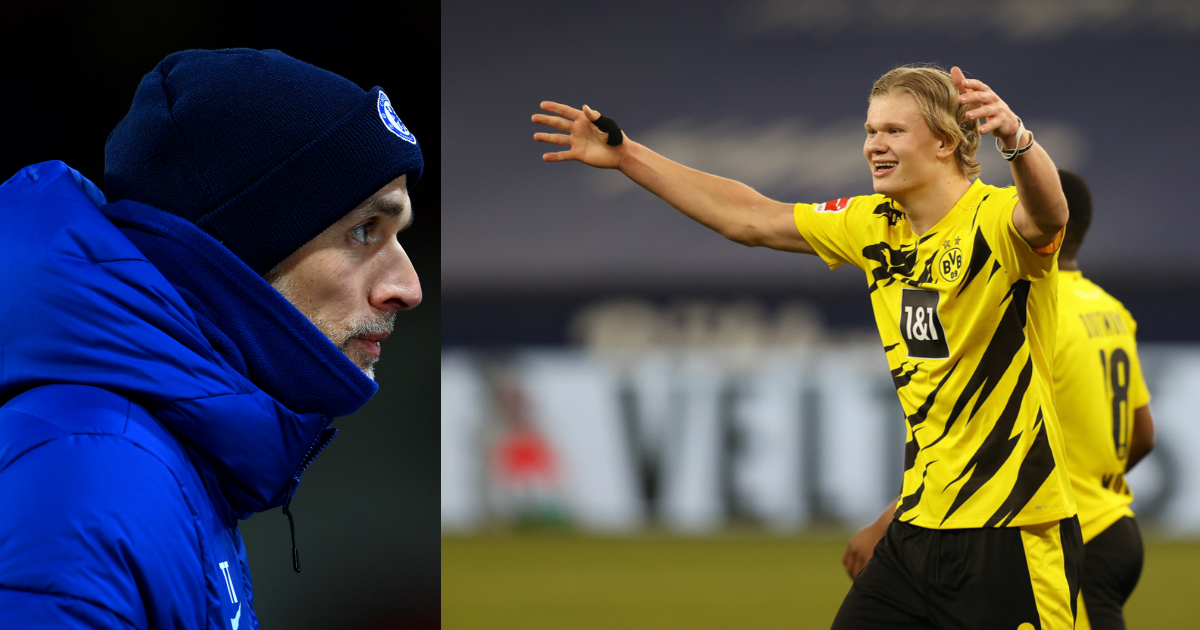 Back in September we said Frank Lampard had to mount a Premier League title challenge after Chelsea spent over £220million assembling a ‘foolproof squad’. He didn’t, so it clearly wasn’t. That was either an error of judgement on our part because the players bought aren’t quite as good (at least right now) as we thought they would be, or because we underestimated the potential impact of manager foolishness. It’s probably a bit of both.

The recent improvement under Thomas Tuchel has come through trust in the old guard rather than the new and as things stand Roman Abramovich has got very little return on his summer investment. Not to be deterred and desperate for his team to return to a ‘top level in Europe’, good old Roman is set to throw more money at the problem this summer – a reported £261.37million (€300m) to be exact.

Erling Haaland – £95million
Chelsea have found out the hard way just how difficult it is to buy guaranteed goals. Timo Werner has scored just five in the Premier League this season in exchange for £47million and not since Diego Costa have the Blues bought anyone worthy of any note in the goalscoring stakes. The Spaniard is the only Chelsea player to notch 20 Premier League goals in a campaign – in 2014-15 and 2016-17 – since Didier Drogba scored 29 in 2009-10.

If there is one striker who’s a guaranteed source of goals, it’s Erling Haaland: 27 in 25 this season; 44 in 40 last season. He’s bloody massive, eats up ground like it’s the first of three breakfasts and has an accuracy in shooting which is both pinpoint and superfluous if on target, given any of his shots at the goalkeeper will send them flying over the line with the ball in any case.

There are thought to be ten clubs able to sign Haaland and for any of them not to be interested in doing so would be utter madness. But they will do well to beat Chelsea to the punch, with Abramovich said to want the Norwegian ‘at all costs’. It is said that £95million will be enough.

Nick Pope – £50million
Chelsea’s desperation to find a goalkeeper in the Ederson mould led them to spend £72million on Kepa Arrizabalaga. Apparently unbeknown to Chelsea, Manchester City also put quite a high stock in their goalkeeper being quite a good goalkeeper as well as an excellent footballer.

Ederson not only has exemplary footwork and can ping an assist when he fancies it, he also ranks second in the Premier League in terms of save percentage this season on 80.4%. Kepa never got anywhere near that high at Athletic Bilbao, was rock bottom last season on 54.5% and – let’s face it – isn’t as good with his feet as he was made out to be.

Edouard Mendy is a better goalkeeper and as good – if not better – in possession. But Chelsea will feel they can do better. Nick Pope should be the man.

He’s the best shot-stopper (80.5%) and cross-claimer in the Premier League. But he’s not good with his feet, they’ll say. Is he not? Are you sure about that? Just because Sean Dyche would have a fit if he played less than a 50-yard pass doesn’t mean that he can’t.

Niklas Sule – £26million
“There was interest from Chelsea, but Bayern are among the top three clubs in the world so I didn’t have to think about it long,” Sule said after his move from Hoffenheim in 2017. “Going to England would have come too early for me. No club from England could have stimulated me as the offer from Bayern did.”

Four years later and Sule is thought to be Tuchel’s primary defensive target this summer. The German boss has hinted at his desire to move on from playing three centre-backs in the future with the current overload in defence presumed to be due to a lack of trust in any two currently at the club.

But with a wealth of incredibly talented and expensive forward players, whose value will drop the longer they go unused, a change of setup to open up another spot further up the field is likely to be Tuchel’s long-term goal.

Like a defensive Haaland, Sule has the physical attributes – combined with no small amount of technical ability – to thrive in the Premier League. And if Chelsea are to have one James Bond henchman banging in goals at one end, why not have one preventing them at the other?

David Alaba – free
The decision not to sign a new Bayern Munich contract seems an odd one until you consider the position Alaba and his agent have put themselves in as a result. With no transfer fee, they can demand extraordinary wages from any club targeting him, with the Austrian thought to want £250,000 a week.

Not only that, he also wants to play in midfield for his next club. Perhaps he would also like to select the team and have his pick of the other players’ wives and girlfriends?

Ignoring the stipulations (Chelsea can always make promises they won’t keep), there aren’t many – if any – more outstandingly versatile footballers around. With Sule playing on the right of this new Chelsea centre-back duo, left-footed Alaba can slip in alongside him during Thiago Silva’s senior moments, or at left-back, or indeed in midfield.

Marco Verratti – £87.13million
Chelsea haven’t really been linked with him, and despite Tuchel’s obvious ties given their time together at PSG, it’s not likely. But gee, it would be great to see the €100million-rated (£87.13m) midfielder in the Premier League.

As a PSG player other than Kylian Mbappe and Neymar, he inevitably flies under the radar. Had Mbappe not scored a wonderful hat-trick against Barcelona (the selfish b*****d), Veratti’s stunning performance would have received the acclaim it deserved – he completely controlled the midfield and provided a beautifully delicate assist for the opener.

And it’s the combination of that control and creativity that is almost cheating in modern football. A player that can protect the back four, metronomically keep the ball moving, dribble past the press and play perfectly weighted through balls? That’s just not fair.

Chelsea have those abilities – apart from perhaps the consistent creativity – at their disposal, but they’re split between Jorginho, Mateo Kovacic and N’Golo Kante in those deeper lying positions. Billy Gilmour could well be Verratti in the making, but who better to learn from in the interim?

Tuchel was desperate to sign Kante from Chelsea when he was at PSG, presumably with a Verratti-Kante double pivot in mind. The dream lives on, for you and for us, Thomas.

One Lillie Square, Lillie Square, SW6 – £3.24million
With this squad, Mr Tuchel will be in London for the long haul (two seasons at least) and is going to need somewhere to live. This three bedroom apartment is a stone’s throw from Stamford Bridge, a 30-minute drive from Cobham, with excellent light, three bedrooms and two bathrooms. It’s on at £3.35m, but we’re confident in sweet-talking Tuchel’s ability to haggle them down.