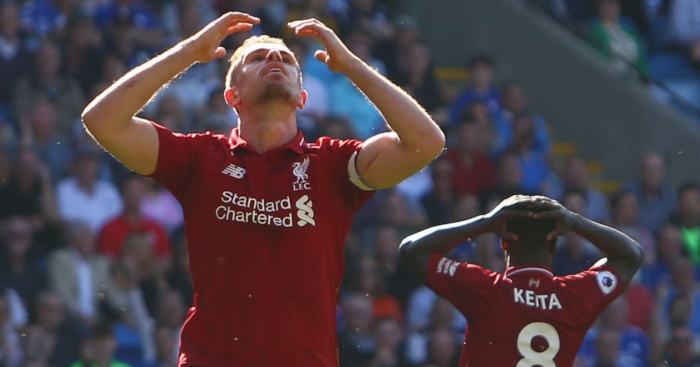 You can see them in full here – but we are happy to mea culpa all over the place, for your pleasure…

As is traditional, tell me who will win the league.
Well we all got this one right; seven of us predicted and seven of us said Manchester City. Most of us intimated that things would be much closer, but Ian Watson pretty much nailed it with this: ‘Manchester City again – just. They’ll be pushed harder and closer this time. Probably by Liverpool.’ Hard, close and it was Liverpool. Well done. But nobody cocked it. And for the record, that’s three in a row for editor Sarah Winterburn.

And the rest of the top four, in order.
‘As is traditional, I will say that nobody ever gets this right,’ wrote Winterburn, and she was right about that at least. She did particularly badly, suggesting that both Arsenal and Manchester United would finish in the Champions League places. Surprisingly – considering their second-place finish the previous season – Matt Stead, John Nicholson and Steven Chicken were all absolutely right to suggest that United would fall short. Indeed, Stead, Chicken and Nicholson came closest with their Man City-Liverpool-Arsenal-Spurs prediction.

The wooden spoon goes to Daniel Storey, who wrote that ‘Jose Mourinho may have done his best to dampen expectation, but United will still get closest’. Closest to what? Cardiff City?

And who are going down, down deeper and down?
We all got Cardiff right, but the rest was basically a s***-show.

Winty managed to pick the 16th, 17th and 18th-placed sides after letting her heart rule her head on Huddersfield Town. Idiot.

Storey picked Huddersfield but then picked Watford because they ‘are a bit too forgettable this season’. Fool.

Stead loves Winty too much to pick Huddersfield so went for Burnley and Watford. Creep.

Watson went for Brighton and Watford too. Copycat.

Nicholson tipped Southampton (on grounds of Mark Hughes) and Bournemouth because ‘it feels like their project is over’. Imbecile.

Dave Tickner suggested Watford ‘after for once failing to get the 30 points they need in the first half of the season due to an almost total absence of goalscoring options’. Which perfectly illustrates why he should stick to cricket. Amateur.

Chicken also cited Bournemouth and added Newcastle ‘because that is by and large a Championship squad being kept afloat by a Champions League manager’. Red.

Which club will be a pleasant surprise?
Shall we all agree that the correct answer here is probably Wolves? In that case, Stead is very much the winner in this category. This is what he wrote in full:

‘By finishing fourth despite having absolutely no right to continue to do so, Tottenham. Wolves will keep the pace with the top six until dropping off around November, but a comfortable top-half finish will be pleasant and surprising enough.’

Basically, he is a sodding genius.

Meanwhile, Storey was writing that Fulham will ‘at least be lovely to watch in midfield and have a batsh*t striker’, while Watson and Nicholson were also fooled by Fulham’s signings. Like children running towards shiny things.

Top scorer, please?
‘Pierre-Emerick Aubameyang. It’s just what he does,’ puts Winterburn back among the winners, while Watson did well to tip Mo Salah to win it again. Elsewhere, many opted for Harry Kane, with Chicken adding: ‘It is still a very silly bugger who doesn’t plump for Harry Kane here.’ Hmmmm.

Again, we return to Storey, who has had a mare here. His take?

‘City’s players will share the goals around again. I’m going to say Harry Kane aren’t I, even though I think Alexis Sanchez is cracking value.’

Which new signing will make the most positive difference to their club?
Four of seven (Winterburn, Watson, Tickner, Chicken) said Alisson so get full points. Let’s look at the others:

Stead: ‘Sokratis will make Arsenal’s defence look like a defence. And be sure to handle this next take with oven gloves: Fabinho will make more of a difference to Liverpool than Naby Keita.’

Half a point, Steady.

Nicholson: ‘André Schürrle at Fulham looks to be a great signing. Always liked him at Chelsea and thought he did really well. At 27 he’s pretty much at his peak. Lots of power and pace and there’s nothing defenders hate more than power and pace, Gary.’

That Fulham spell really was strong.

Storey: ‘Random shout: Yves Bissouma. He looks the business and could be the difference between Brighton staying up and going down.’

He played fewer than half the games and Brighton just about survived. Random shout: Storey was trying to be too bloody clever and fell flat on his face.

And which one will turn out to be a massive flop?
Basically, Winterburn has smashed this out of the park: ‘There seems to have been a glut of biggish-money signings that you wouldn’t recognise in a line-up even if they were wearing their new kit. See: Brighton’s entire summer business. But it would be a cop-out to start naming £10m Brighton signings so instead I am going to go for Fred. I just don’t see over £50m of midfielder.’

Elsewhere, Storey clawed back some dignity by suggesting Jorginho, Stead and Watson got it wrong on Felipe Anderson, Nicholson underestimated ‘the flying pork barrel that is Xherdan Shaqiri’ and Tickner stupidly thought Tottenham would buy an actual footballer.

And of course Chicken was right about Jack Wilshere.

Who will turn out to be a shrewd bargain?
Nobody covered themselves in any glory here at all, with Sokratis, Bernard, Max Meyer, Erik Durm, Lucas Torreira, Ben Gibson and Andre Schurrle all getting shouts. We will give half a point to Watson for indulging his love for Jonny Evans but nobody came up with the ‘right’ answer, which is basically ‘anybody who was bought by Wolves or Newcastle’.

Who will be named the PFA Player of the Year?
Nobody said Virgil van Dijk, basically because we all thought Manchester City would win the league. Most went for Kevin De Bruyne but Winterburn showed her chops by saying Sergio Aguero, who at least made the final six. As she is the boss, she gets to declare herself the winner anyway.

First manager to leave their Premier League job?
Of course nobody said sodding Slavisa Jokanovic because of course we all thought they would basically re-invent the wheel. How sodding ridiculous.

There were decent shouts for Claude Puel (Winterburn), Mark Hughes (Stead) and Jose Mourinho (Nicholson), while Chicken and Watson both thought Rafa Benitez would walk. Storey claimed Neil Warnock could go if Cardiff struggle (he didn’t) while Tickner doubled down on Watford and said Javi Gracia; predicting cricket is probably easier.

Pick the Champions League winner for the European football fans.
Nobody said Liverpool or Tottenham. There were a lot of shouts for Juventus, but as usual Storey tried to be all clever and different, writing that he had a ‘hunch that the Paris Saint-Germain project could come to fruition this season’. It really didn’t.

And finally, what are you most looking forward to about this coming season?
Ah, just read the full list here. Tickers is obviously gutted about the cheese room.