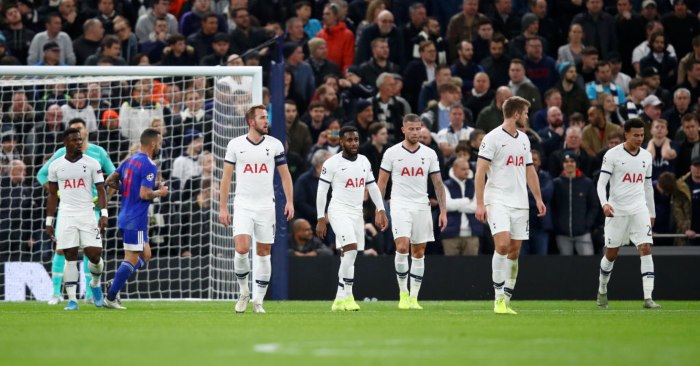 As good as winning away again would have felt for Tottenham, the rush to proclaim new positives has been premature. Saturday may have been cathartic, but it was really more to do with West Ham – their awful goalkeeper, their disengaged press and their hopeless defending. It was three points earned, but they came boxed and with a bow.

Tuesday brought another win, but courtesy of further gifts and with a quick reminder of the range of problems inherited by Mourinho. Refocusing this squad is going to be one challenge – the simple one – but curing its structural and technical issues is another entirely. Ultimately, these aren’t just players who grew disinterested under Pochettino; in some cases they sharply deteriorated and receded inside themselves.

If Mourinho didn’t know that before kick-off against Olympiakos, it didn’t take more than ten minutes for that clarifying slap to arrive. Tottenham’s opening 25 minutes were arguably their worst of the season. They were dismal. The Greeks may have held them to a higher standard than West Ham, but that amounted to little more than having a coherent gameplan. To play with speed, to press the ball, and then to defend with thick forests of players.

And it was enough to expose the flaws, to build a two-goal lead and to force that early substitution of Eric Dier.

It seemed typical of Mourinho – he’s never been afraid to throw a player under the bus – but what choice did he have in that instance? Dier had been hopeless. By the time Olympiakos scored their first, his wayward positioning had already been exposed several times. By the time of their second, he had sunk irretrievably into the mire.

The less appealing aspects of Mourinho’s appointment were covered last week, in plenty of detail and probably with too much emotion, but this is also what he brings – these benefits are the recompense for what has to be tolerated.

Without that substitution, Tottenham probably wouldn’t be entering the final Champions League match-day having already qualified. Olympiakos certainly helped them back into the game, but there’s no question that Christian Eriksen improved the quality of distribution from midfield, or that adding his range of abilities altered the game’s dynamic.

Any bruising to Dier’s ego is collateral damage. It was the right decision for the team and that was the point emphasised by Mourinho after the game, albeit with the acknowledgement that he had to humiliate one of his players in the process.

But it’s not difficult to spin that as a healthy development. One of the minor gripes that blighted Pochettino’s reign was his hesitancy in making substitutions. That never quite went away and so, whatever distrust there is of Mourinho, there was novelty in seeing a pro-active approach. More so in it being so thoroughly vindicated.

Pragmatism is one of those terms which has acquired a loose definition in recent years. In certain cases, it’s become code for ugly, direct football. Sam Allardyce and Tony Pulis are pragmatists. With Mourinho it can be tactical or aesthetic, but it can also refer to his dispassionate commitment to obtaining results – in any game, he’s able to draw a mental line between where he is and where he wants to be, with the exclusion of everything else in the periphery.

Pochettino was often the opposite. Method seemed to matter more. Too much, perhaps. He would pace his technical area, seemingly lost in thought, as if every micro-decision made within a game was dependent on dozens of incalculable factors, even when the decision seemed simple. If Tottenham were being held at home against a weak, deep-lying side, for instance, Fernando Llorente would trot onto the pitch 15 minutes too late.

Conversely, Mourinho has always been led by instinct and he possesses that natural arrogance which, when faced with difficult decisions demanding a gut reaction, can be a tremendous asset.

It’s ironic, because in every other area of his profession Mourinho is notoriously calculating. He’s an arch manipulator whose every action is plotted and considered. He’s doing it already at Spurs – in his interviews, with his expressions, in that moment when he hugged a ballboy on Tuesday night. Mourinho is the actor who never breaks character. Everything he does is supposed to provoke something – to prompt a tweet or an article, or a slight softening in attitude.

And yet put him in a technical area and that pragmatism takes over; he sees only the score.

This also felt like a junction on his journey within this new job, though. If Mourinho can be faulted for anything so far, it’s for being too loyal to outdated reputations. His selection of Dier is an example of that. He presumed him still to be the player he wanted Manchester United to spend £50m on in 2017, whereas most Spurs fans would now cheerfully carry him to Old Trafford for £25m.

One of the other curiosities last week was the faith he professed to have in this squad, primarily because it’s a confidence shared by absolutely no-one else. It may have been PR spin and an attempt to chisel away at his reputation for transfer-market dependency, but those are statements he’s backed up with his team selections.

He arrived at the club with rigid ideas about who he wants in his side and who he doesn’t. Ben Davies over Danny Rose. Serge Aurier instead of Juan Foyth and Kyle Walker-Peters. No Christian Eriksen, because he isn’t focused. No Moussa Sissoko, because he isn’t right.

But already he’s having to back off some of those assumptions. It’s taken less than 120 minutes for the first draft of the midfield to be screwed up and tossed away. The reservations about Eriksen have had to put aside. The imperfections he sees in Sissoko now have to be ignored. Further back, he probably also realises that his defensive components are less than ideal.

It’s certainly encouraging that he’s willing to be flexible, but it’s still a situation which creates an intriguing conflict between Mourinho’s pragmatism – his notorious, seething intolerance for anything that doesn’t work precisely as it should – and the more nebulous regions of this Tottenham side and, more importantly, the vaguer aspects of their operating procedure.

That’s probably how to view the Dier substitution. On Tuesday, it was part of an entertaining comeback narrative and a night of a high drama. Over the longer term, though, it’s probably indicative of the difference between what Mourinho thought this Tottenham squad was and what it actually is.

So far, he’s reacted to that problem well and manoeuvred around it successfully. But having arrived at the club and predetermined that Dier could be his static ball-winner – the ingredient that all of his successful midfields possess – he already finds himself without that piece and with exactly the same personnel problem that undermined Pochettino. He has a team with a weak heart and, according to reports at the end of last week, no money with which to address that issue.

It’s the first culture clash. Between a head coach who is unbelievably specific in how he wants his team’s departments to function, and a club who, for the last five years, have had the privilege of someone who was successful in making do with what he had. Daniel Levy has changed the tone of the reporting by making this appointment, but the nature of the problem afflicting his club is still the same. Worse, actually, because Mourinho needs to be properly equipped and he doesn’t tolerate anything less.