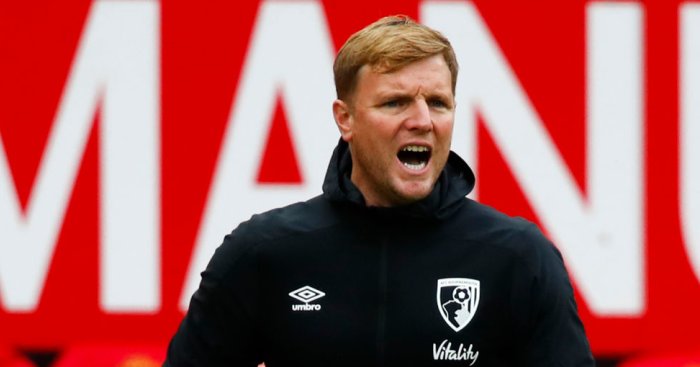 Eddie Howe claimed Bournemouth were still in with a chance of beating Manchester United until they conceded a fourth goal.

Bournemouth fell to a 5-2 defeat at Old Trafford, despite taking the lead – with the result having a contrasting impact on either side’s targets for the season.

While the result was a huge boost for Man Utd’s chances of reaching the Champions League, it painted quite the opposite picture for Bournemouth, who remain in the relegation zone with just five games left.

The result was even harder for the Cherries to take given that they had gone in front, via Junior Stanislas in the 13th minute.

It leaves them one point adrift of safety, with the three sides directly ahead of them in the table all having a game in hand.

And Howe was downbeat that his side’s efforts came to nothing – claiming they were still in the game until Mason Greenwood made it 4-2.

“We gave it a go,” he told BT Sport. “Ultimately we conceded five goals and that is really tough to take.

“I think we performed better with the ball, I thought we counter-attacked well and were a threat.

“I didn’t feel the game was over until the fourth goal, so we were well in the game. But you look at the manner of the goals we conceded – when 1-0 up, we had a foothold in the game, and that will disappoint us greatly how we let them back in the match.”