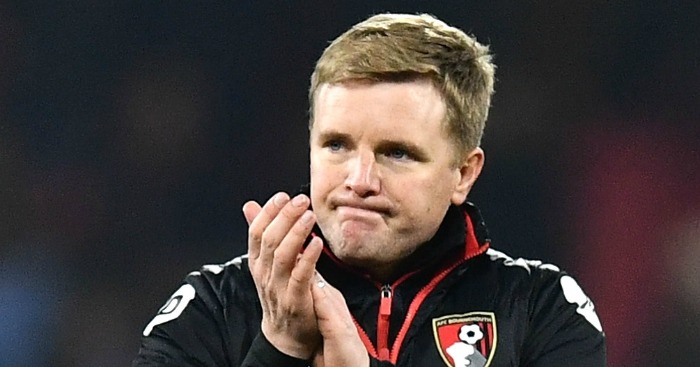 Bournemouth boss Eddie Howe has dismissed suggestions of a drinking culture in football in the wake of Wayne Rooney’s drink-driving conviction.

Former England captain Rooney was sentenced to community service and handed a two-year driving ban on Monday after being caught nearly three times the legal alcohol limit while behind the wheel on September 1.

Despite the high-profile incident, Howe – whose side face Rooney at Goodison Park on Saturday – does not believe there is a serious issue with modern-day professionals and alcohol.

“There may be one or two isolated incidents but I think the game has changed dramatically from when I think back to when I started to now. I think it’s unrecognisable how the players behave, how they look after themselves.

“There will always be incidents, that’s human nature.

“There will always be stories of players doing certain things but in the main, I don’t think there’s a drinking culture in football at all.”

Former defender Howe represented Bournemouth, Portsmouth and England Under-21s in his playing days, which stretched from 1994 to 2007.

The 39-year-old admitted there was a different attitude towards alcohol during some of that era and thinks footballers can no longer combine drinking with a successful career.

“That was normal, that was just the culture. And that’s why I say it’s changed so much since then.

“I think the big difference now is that you can’t mix the two because the demands physically are so extreme on the players as they go into a game day, they need to be ready to perform.”

Howe revealed he is now almost teetotal while expressing a desire for his Cherries squad to follow suit.

He also stressed that none of his players currently have alcohol problems.

“I probably am now,” Howe replied when asked if he is teetotal. “When I was playing, I certainly didn’t drink to excess. It’s not been something that I’ve really ever wanted to do; sport has been my main love.

“My rule for my players to be the best that they can be is don’t touch a drop. I don’t ever advocate that they should drink.

“We haven’t had an issue here, that’s not to say that we won’t have an issue in the future and you can never get complacent on these things.”