Home F365 Says Howe, Dyche and the dangers of the managerial comfort zone 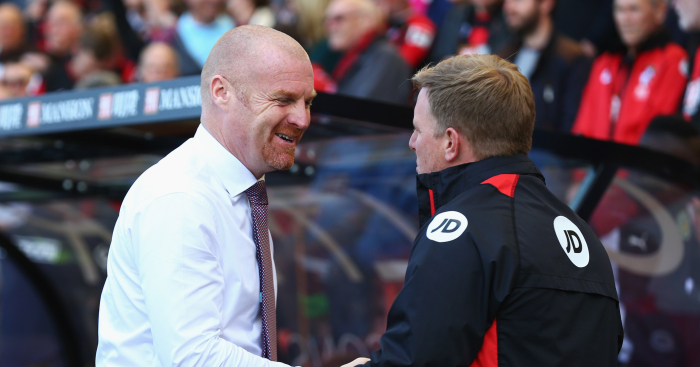 For those still sceptical as to whether opposites really do attract, Eddie Howe and Sean Dyche’s respective managerial career trajectories are a useful case study. The young, stylish, attack-minded coach and his older, rougher, more pragmatic contemporary are seemingly tethered together like subjects of a Jordan Peele script.

While Howe enjoys the above-ground advantages of being touted for much grander jobs, Dyche endures a more painful reality of life roaming the tunnels beneath the top-flight management surface. Both have done incredibly well in the circumstances, but their career paths will inevitably diverge in time.

The diametrical differences between the two leading lights of English club coaching have been discussed on these pages before. But their similarities are striking: they are the two longest-serving managers in the Premier League, were appointed in the same month in October 2012, and have both struggled in their only other post elsewhere. If Dyche would rather forget his time at Watford, the man he replaced at Burnley six years and five months ago likewise soon regretted leaving his own position of comfort.

Howe himself once said that his short spell at Turf Moor “did shape me,” and that he “learned so much” before his return to Bournemouth after less than two years away. The question is whether the time has come to branch out again.

A 2-0 defeat to Leicester leaves the Cherries in a far from disastrous 12th place, ten points clear of a relegation battle they will not be drawn into now. But that should not distract from their deteriorating form: since November 1 they have earned just 18 points, more than only Fulham (12) and Huddersfield (11), while conceding the most goals (46).

It is more of a long-term slide than a short-term slump, and something Howe must address before it impacts on next season. Many a club has had a terrible run that has lasted over a few months masked by a seemingly comfortable mid-table finish that leads them to believe that it ain’t broke, and thus they do not spend the summer trying to fix it. Bournemouth, with five wins in their last 24 games, cannot afford to ignore their increasing mainteanance issues.

Fortune goes only some way to explaining their plight. The usual combination of Ryan Fraser and Callum Wilson was denied by a sublime Kasper Schmeichel save in the first half on Saturday, but they had just one other shot on target against their hosts.

Leicester have the better squad and the greater investment, but that has never been an obstacle to Howe. He has mastered the art of levelling the odds through coaching, and while many of his players did not come cheap, plenty have been with him throughout his journey from the lower-leagues to the Premier League.

But Bournemouth have now lost half of their league matches this season, with only the bottom four being on the end of more defeats. Leicester looked an echelon or two above their opponents under Brendan Rodgers, even though the Northern Irishman is just over a month into his reign.

The Foxes might have been the most natural next step not only for Howe but for Dyche too, had Rodgers not earned his Premier League reprieve. The Burnley manager was “flattered” when he had his side in 7th, and would presumably have been flattened had he been offered the Leicester job 18 months later with the Clarets down in 17th.

They remain there even after their first win in five matches. His 300th game in charge of Burnley ended in the exact same way as his first: with a 2-0 win over Wolves at Turf Moor. The three points offer more breathing space between them and Cardiff, but Southampton’s form means they are having to take strides forward just to stand still.

Howe and Dyche might well be victims of their own success. They have the safest jobs in the top flight as the third and fourth longest-serving managers in the entire Football League, have already vastly over-achieved in terms of club expectations, and would likely even survive a relegation: who better to guide either Bournemouth or Burnley back to the Premier League than the managers who did it in the first place?

The other side to that double-edged sword is that neither really feel the same pressure as everyone else. They can afford to make mistakes, to allow situations to fester, to stumble into trouble. They know they have earned more than enough time to correct their mistakes. But that poses its own problems.

They were both left with burned fingers last time, but Howe and Dyche will soon look to venture outside their respective comfort zones, eager to test themselves again. It would be a surprise to not see at least one of them untether themselves not necessarily from the other, but from their all too familiar surroundings.