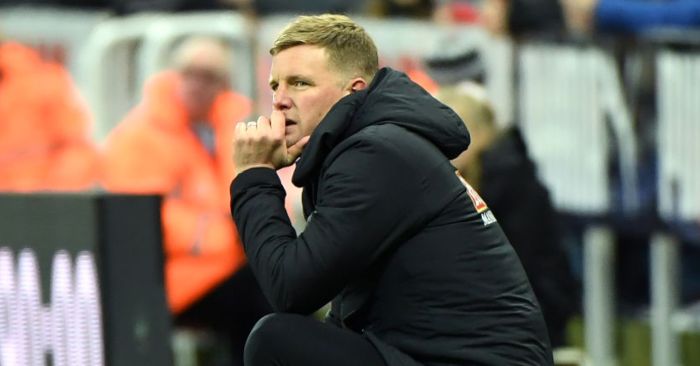 Bournemouth manager Eddie Howe feels his side are heading into a run of games which can make all the difference to their Premier League season, and insists they cannot afford to let Nathan Ake leave the club at such a crucial time.

After claiming just four points from the past 10 matches since beating Manchester United, the Cherries have slipped down into the relegation zone.

The 4-0 FA Cup third-round win over Luton provided some much-needed home cheer following on from another disappointing defeat at West Ham on New Year’s Day.

Bournemouth host Watford on Sunday, a team just a place and a point below them in the table, and will then head to bottom club Norwich.

Brighton and Aston Villa also come to the Vitality Stadium in the next few weeks.

Howe knows now is the time to deliver a consistent spell to push back up the table.

“We have got a key run coming up against teams in and around us and that’s going to make the difference in our season,” the Bournemouth manager said.

Howe wants his side to make their compact ground a tough place to visit once again – having won just twice at home in the league so far.

“We (do it) by winning and creating that feeling we are invincible here,” Howe said at a press conference broadcast on the club’s website.

“Teams used to really fear coming here. It is a tight stadium, a small ground obviously, but with a really good atmosphere.

“There’s no blame on the crowd because we haven’t performed well enough here consistently this season, with only a couple of wins – it is not enough.

“Between now and the end of the season, we really need that feeling back and that atmosphere back. We can only create that as a team ourselves.

“That is what we are going to endeavour to do – you go out with good body language, attitude and mentality, then the crowd will back that.

“I am desperate to see that this weekend and we have to show how much this game means to us.”

Defender Nathan Ake, currently one of several players injured, has been linked with Arsenal and a return to former club Chelsea, who hold a buy-back clause.

Howe, though, maintained no bid had been received – and has no intentions of letting any key men leave during the January transfer window.

“I would certainly hope not – not with the position that we are in,” said Howe, who confirmed goalkeeper Asmir Begovic has returned from his loan spell at Azerbaijani club Qarabag.

“It is not a time for that – it is a time for everyone to unite together and to be totally focused on achieving our goals.

“To sell any of your top players, the ones that make the difference, that are part of your plans – that is an absolute ‘no-no’ as far as I am concerned if we are going to achieve our objectives.”