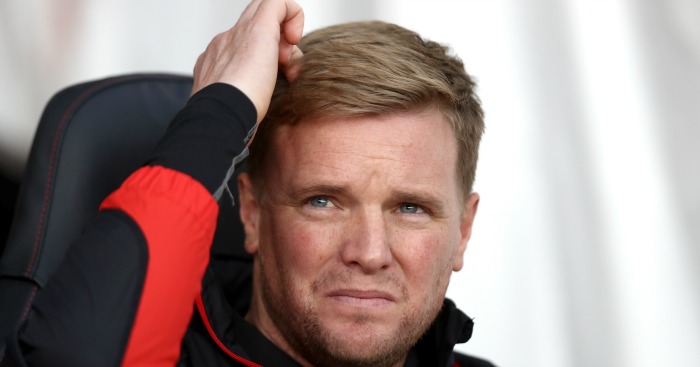 Eddie Howe has revealed he works on the proviso he will be at Bournemouth “for the next 20 years”.

The Cherries boss has lamented the Premier League’s increasing short-termism around managerial reigns, off the back of the Ronald Koeman and Craig Shakespeare sackings.

Everton dismissed Koeman on Monday while Leicester dispensed with Shakespeare earlier in October after just four months in the permanent job.

Bournemouth host Chelsea on Saturday, with Antonio Conte coming under pressure this term despite leading the Blues to the league title last year.

“All the pressure here comes from myself, that’s my mentality, but I don’t like to see managers sacked,” said Howe.

“It makes the profession very delicately poised, at all times.

“When you’re on a losing run there are always questions about your future.

“I don’t think it’s good for the profession.

“I work as though I’m going to be here for the next 20 years, preparing the team and the club for the future as best I can, until I’m told differently.

“When you’re a manager you have to prepare for the long-term, for the future benefit of the club.

“But ultimately you’re not the dictator of that.

“You need people above you to have a long-term vision, to share your successes, share your disappointments, and to know you’re working towards something for the long-term.”