Home All The News Howe reacts to Cook ‘save’, Farke defends Godfrey 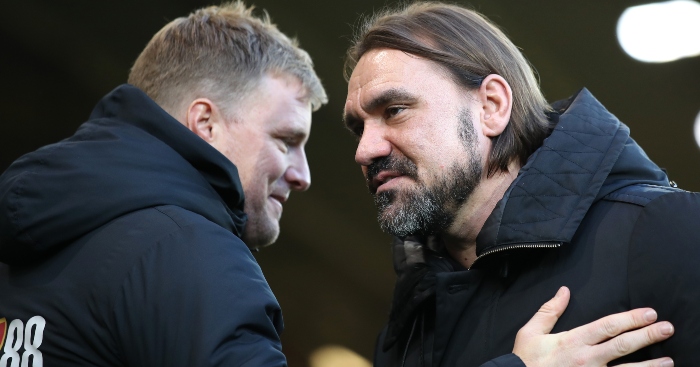 Referee Paul Tierney, who had already sent off Bournemouth’s Steve Cook for handball in the first half, consulted his monitor in the second before changing Ben Godfrey’s yellow card to a red.

Cook’s dismissal came when he palmed Ondrej Duda’s goalbound shot onto the post, with Teemu Pukki firing his side into the lead from the subsequent penalty.

In the second half, Godfrey was dismissed after review for an ill-timed tackle on Callum Wilson as both sides finished the game a man down.

When asked about the decision to dismiss Godfrey, Farke said: “I don’t want to speak too much. These are the new rules and we accept it. Both red cards were the right decision.

“Ben is a really good lad…it was not that intention, he was just a bit over-excited and emotional to win the ball after he lost the ball. Ben is probably the most disappointed guy in the dressing room.”

On whether Tierney’s use of the monitor was an improvement on VAR, the Canaries boss said: “We have this experience in Germany, and it depends if the decision in the end is right or wrong.

“There is pressure on the referee from the home fans. In general it is difficult.

“I think we have to support the role of the referee. In recent weeks, it has seemed the referee has not been in the driving seat and someone else has been taking the decisions.”

Bournemouth manager Eddie Howe agreed the referee made the right decisions, and insisted the Cook sending-off had decided the match as his team suffered a fourth straight league defeat.

He said: “When we were down to 10 men is probably the best we’ve battled in recent weeks, we played really well.

“We stayed in the game for set-plays and counter-attacks to try and get the chance to score and get the ball to bounce our way, we had a couple of moments there today.

“The moments were there for us today and I think they haven’t been there in recent weeks but obviously it’s costly for us.

“It’s decided the game, it’s one of those things that happens. I actually thought it was Aaron (Ramsdale, goalkeeper) who saved it initially, I didn’t know Steve had handled the ball. Pure instinct from him.”