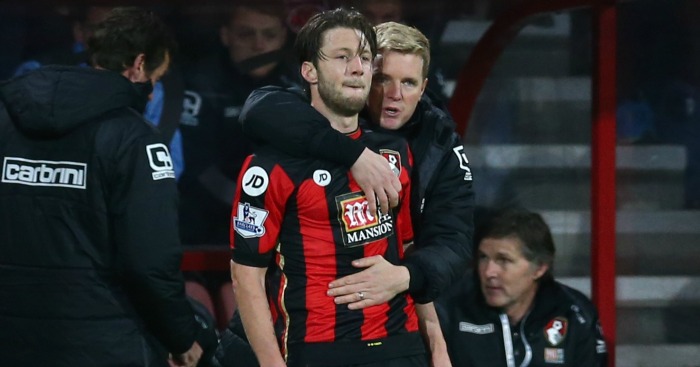 Arter was close to tears when booked for a fulsome challenge, with Cherries boss Howe embracing his combative star on the final whistle.

Manager Howe hailed an unprecedented week for Bournemouth, following the 1-0 win at Chelsea, backing the promoted club to win their fight for Premier League safety.

“It’s been a really tough week for Harry and his family, naturally,” said Howe.

“Life has a way of throwing these things at people and families, and it’s been a hugely emotional week for him.

“I think he’s handled himself with real dignity throughout the process, and to play the way he did today, with the emotions running through his body, I can’t credit him enough for that.

“He showed real strength to keep his emotions in check, and I’ve got to say his team-mates rallied around him really well.

“There were some emotional scenes in the dressing room afterwards.

“I’m really proud of him, but the pain for them won’t go away, so we’ll have to look after Harry, and our thoughts are with him and his family at this time.

“I had to make an assessment of him and how he looked to me and have a chat with him.

“But there was no doubt once I’d spoken to him that I was going to play him today.”

Junior Stanislas opened the scoring by curling home direct from a corner at Dean Court. United equalised through Marouane Fellaini’s scruffy finish, but Bournemouth struck back and sealed the win through Josh King.