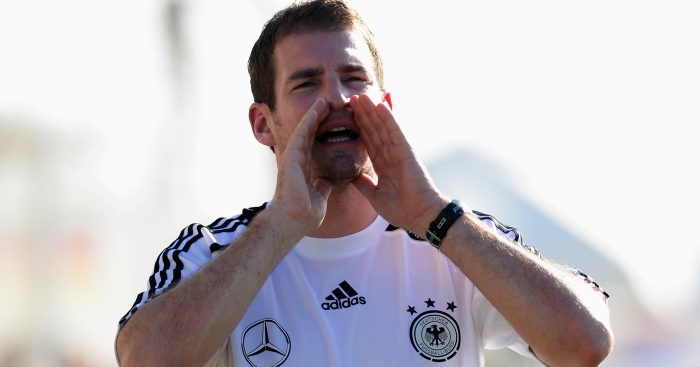 Huddersfield have confirmed the appointment of Jan Siewert as their new head coach.

Siewert, 36, has left his role as Borussia Dortmund’s reserve-team coach and signed a two-and-a-half-year deal with the Terriers.

“Huddersfield Town is delighted to announce the appointment of Jan Siewert as its new head coach,” the club said in a statement.

“The 36-year-old joins the Terriers from German side Borussia Dortmund II, where he held the position of head coach, signing a contract running until the summer of 2021.”

Wagner had held the same position as Siewert at Dortmund before he was appointed by Huddersfield in November 2015.

Huddersfield owner and chairman Dean Hoyle added: “I’d like to begin by officially welcoming Jan to Huddersfield Town. I’m tremendously excited about working with him as our new head coach.

“Let me start by addressing the obvious. We enjoyed tremendous success under our previous head coach, David Wagner, and we’ve subsequently appointed a new head coach that bares many similarities to him; a young, aspirational German from Borussia Dortmund II.

“However, that does a disservice to Jan, who is his own man. There is much more to this appointment than that.”

The Terriers were transformed from Sky Bet Championship relegation candidates to Premier League promotion winners under Wagner, who steered the club back to the top flight for the first time in 45 years in 2017.

Huddersfield Under-23s coach Mark Hudson took charge of Sunday’s home defeat to Manchester City, which left the club 10 points adrift of safety at the foot of the table.

🤝 #htafc is delighted to announce the appointment of Jan Siewert as its new Head Coach.

The 36-year-old joins The Terriers from @BVB II, where he held the position of Head Coach, signing a contract running until the summer of 2021.

Hoyle added: “Jan’s name came to our attention in his previous role as assistant manager and under-19s coach at Bochum. We first spoke with him over two years ago and we’ve kept in communication since, watching his progress with interest.

“When David let us know he intended to step aside at the end of the season, we quickly moved to meet Jan; his name was still at the top of our list of possible successors.

“There was an immediate connection; you could see why he was so highly thought of. He is articulate, passionate and he has a huge ambition to be a success.”

Siewert, a former player in the German lower leagues with Mayen, SG Bad Breisig and Montabaur, embarked on a coaching career in 2009 as a junior co-ordinator for the German Football Association (DFB).

He had spells as assistant coach of the German Under-17 and Under-18 sides and after one year as head coach of fourth-tier side Rot-Weiss Essen he moved on to Bochum, where he was assistant to Dutch head coach Gertjan Verbeek before joining Dortmund in the summer of 2017.

QPR were reported in Germany to have made an approach for Siewert following Ian Holloway’s departure last summer, but the German turned the Sky Bet Championship club down.

Siewert was mistakenly thought to have been sat in Huddersfield’s directors’ box during Sunday’s match against City.

To widespread amusement the gentleman bearing an uncanny resemblance to the coach was asked live on Sky Sports whether he was Town’s proposed new manager and replied: “No, that’s not me. I’m Martin from Wakefield!”

Siewert’s doppelganger was Martin Warhurst, a match-day guest of Huddersfield’s and chief executive of the Martin House hospice, who also saw the funny side.