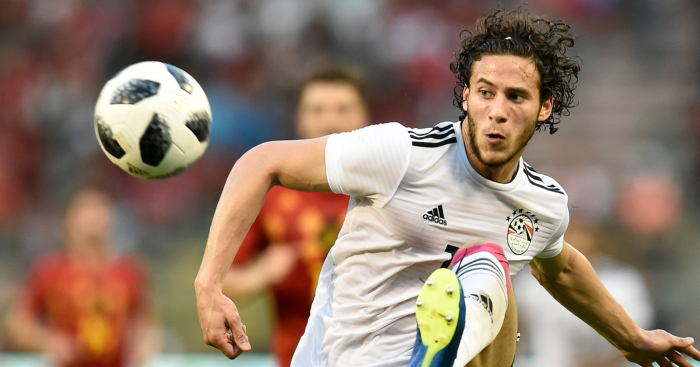 Huddersfield have announced the signing of winger Ramadan Sobhi from Stoke for around £5.7m.

Sobhi, 21, who flew in from Egypt’s World Cup training camp in Italy to complete the move, has put pen to paper on a three-year deal.

“Huddersfield Town will sign Egyptian international Ramadan Sobhi from Stoke City following the conclusion of this summer’s World Cup,” the Terriers confirmed on their official website.

“The 21-year-old winger will make the move north for a fee that will remain undisclosed.”

Sobhi, who can play on either flank or behind the striker, made 40 Premier League appearances for Stoke, who signed him from Egyptian club Al Ahly in July 2016.

He has made 20 senior appearances for Egypt, who will face Group A rivals Saudi Arabia, Uruguay and hosts Russia at the World Cup.

“He’s a real talent and has achieved a lot for a player who is only 21 years old,” said Huddersfield boss David Wagner.

“He already has a lot of the qualities that we look for in our Terriers Identity. He’s skilful, direct and very quick-thinking. He still has a lot of space to improve too, which is very exciting.”

Sobhi is Huddersfield’s second summer signing since they survived their first season back in the top flight for 45 years.

The Terriers turned defender Terence Kongolo’s season-long loan from Monaco into a permanent deal for a club record transfer fee earlier this month.