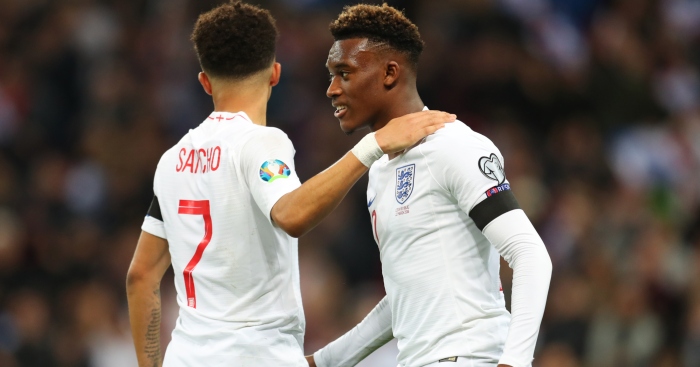 The winger scored his first goal for the Stamford Bridge side in a Europa League game in November and became the youngest ever player to appear in a competitive match for England last week.

He came on as a 70th-minute substitute for Raheem Sterling and played a part in one of the goals as England won 5-0 against the Czech Republic.

The 18-year-old told reporters of the influence of fellow Manchester United transfer target Sancho, and how they had both helped each other progress.

He said: “We have known each other since we were very young.

“We used to play against each other and we were always close friends.

“No matter whether it was Chelsea against Watford, where we used to play against each other.

“Since I have been here with England, he has helped me from day one, always made me feel comfortable and confident.

“Having a friend like that is amazing, just to bring you into the team and help yourself and be yourself. It is amazing.”

Sancho, who revealed he had given career advice to his “close friend” when he was being linked with a move to Germany, played for Watford and Manchester City as a youth and made his England debut at Wembley.

He has become a regular for Borussia Dortmund this season, scoring eight goals in 26 league appearances.

The pair have not changed their playing style since their younger days, Hudson-Odoi said.

“We have that raw mentality just to go at defenders. Be confident, be yourself, don’t be shy in front of anyone.

“That’s great that we have the confidence and ability to do that.”