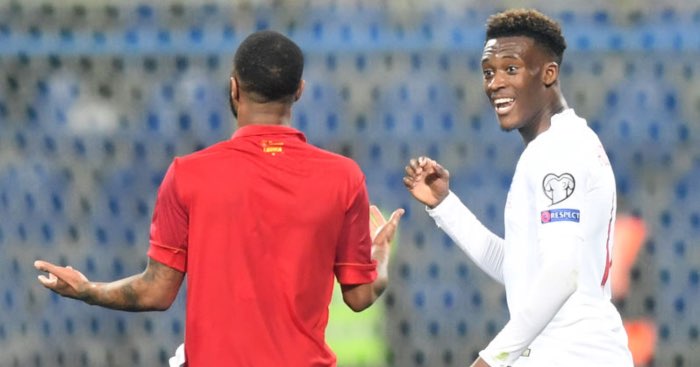 Callum Hudson-Odoi has revealed England team-mate Raheem Sterling is his go-to guy for advice on his game.

Hudson-Odoi burst on to the scene last season, becoming the youngest ever Three Lions international starter when he played against Montenegro in March.

Sterling has taken the Chelsea winger, still only 18, and Jadon Sancho under his wing in the England set-up as he performs a more senior role in the squad.

Hudson-Odoi is in the early stages of a comeback from a serious Achilles injury and is in the under-21s squad this week, but he has still been contacting the Manchester City star for guidance.

“I’d say he is one of the best wingers in the world right now.

“When I watch him play it’s an amazing feeling because he likes to help and contribute to the team as much as possible.

“I look at him as a player and say if I can be like that, get the goals he’s getting and the way he’s playing for the team, it could be amazing, not just for me but the team as well.

“When I have the opportunity, I do speak to Raheem. I ask him, ‘How do you get all the goals you are getting, how do you work for the team, how do you impact in big games?’

“For a person like that to help you, it’s an amazing feeling. Obviously, he’s in a different team so he doesn’t have to do that. But he does because he wants everyone to do well.

“But a player like him, it’s a massive thing to know he’s in the national team and I can chat to him and say what’s good and what’s not good. It’s an amazing feeling.”