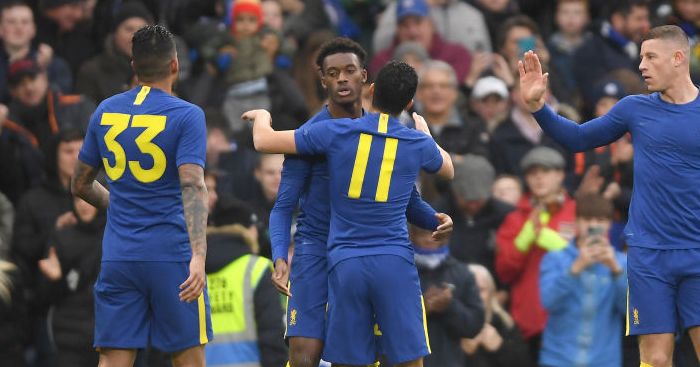 It reads like the sort of inspirational message you might find on a Facebook status set against a nondescript sepia background, published by someone who was in the year above you at school and who now has social media accounts set up for their pets. Or perhaps it is a piece of advice issued by a flustered parent trying to placate their furious child after a setback in Snakes and Ladders.

For Callum Hudson-Odoi, it is particularly pertinent: sometimes you really do have to take a step back to move forwards.

He has been here before. The FA Cup third round. Stamford Bridge. Nottingham Forest. Even the finer details of him being the difference in a routine 2-0 victory echo where he was last January, as well as crystallising how far he has come since and the distance he still needs to go.

“You have to understand the journey’s not finished,” said Gianfranco Zola before this very game 12 months ago. “He’s at an age where it’s very important to keep a good attitude. It’s not important playing straight away, playing 20 games, it’s important to develop.”

It did not feel as though Chelsea’s assistant would be stressing the need “to give the kid a bit of time” a year later. But there Jody Morris was, pointing out earlier this week that “he knows he can do better”.

And better he did. It was Hudson-Odoi who completed a flowing passing move in the sixth minute, collecting Pedro’s ball wide on the right and carving through defence and goalkeeper in four purposeful, confident touches.

A similar situation forced Ross Barkley’s goal, Hudson-Odoi humbly receiving the midfielder’s pass, testing those poor ankles of Yuri Ribeiro with twists and turns and forcing the save from Jordan Smith for Barkley to tap in.

Most notable in that second goal was not necessarily how positive, assured and single-minded Hudson-Odoi was, buoyed by the opener, but in how the Chelsea fans reacted to him being given possession with space and time to exploit. Groans of disappointment have so often followed that collective hushed breath of expectancy whenever he gets the ball this season; not this time.

It was the soundtrack that accompanied Nottingham Forest’s last visit to these quarters, with Hudson-Odoi’s two assists then adding weight to the argument for his inclusion and against Maurizio’s Sarri apparent misuse of a wondrously talented teenager. Frank Lampard has already given him more Premier League starts this campaign than he was afforded by the Italian, yet his opportunities have remained few and far between.

There is a reason for that. While Eden Hazard was his main obstacle to the first team before, Willian, Christian Pulisic, Mason Mount and Pedro are far more surmountable barriers. Hudson-Odoi himself will admit that his standards have dropped with a level playing field instead of there being one shining example.

And therein lies part of the conundrum. This time last year, Hudson-Odoi was a teenager training every day and playing every week with his ideal role model. Not only has that marker been removed, but long-term injury and high-profile interest from afar has had a profound impact on a 19-year-old still maturing as a person, never mind as a player. It was naive to expect him to assume Hazard’s mantle so seamlessly.

He might never manage that particular task. It is far harder than it sounds, to carry the hopes and expectations of an entire club on your growing shoulders. And it should never be the demand of a teenager experiencing his first difficult spell.

Hudson-Odoi and his detractors might consider a standout display in a 2-0 FA Cup win over Nottingham Forest to be, at best, an example of a player stagnating, at worst one taking a step back after giant strides of progress. A more sensible eye will have seen someone continuing to acclimatise to a new situation, and doing a damn fine job of it.