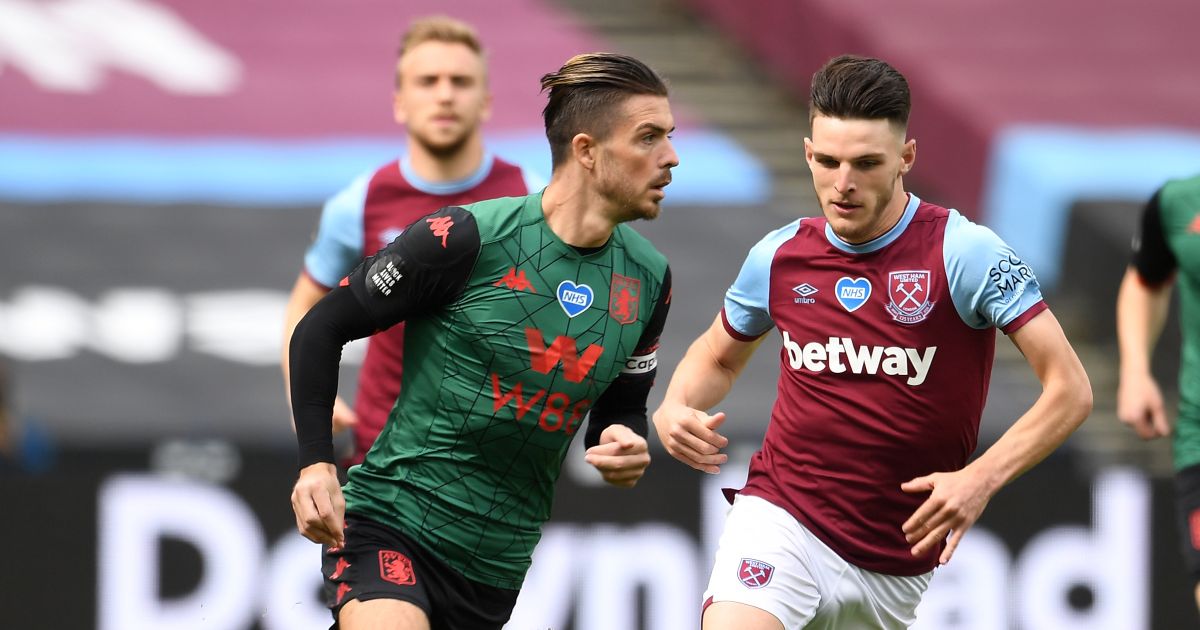 Of course Declan Rice and Jack Grealish are staying; they are wearing kits they are obliged to wear.

Kit’s nonsense
It’s that time of year again: the time when kit launches give hints that reported transfers absolutely will not take place despite the photographs being taken weeks or even months ago.

In The Sun newspaper, ‘JACK GREALISH has given Aston Villa a huge boost by featuring in the club’s new Kappa kit launch’. He is a) the captain and b) their best bloody player, so imagine if Grealish did not feature in their new Kappa kit launch? He would have had to refuse last season when the photo shoot took place. Mediawatch knows little about the machinations of football clubs, but we suspect that would not have gone down incredibly well.

‘Pessimistic Villa fans feared they would never see Grealish in their club’s colours again when he headed off for England duty, amid rumours Pep Guardiola was preparing to launch a £100million bid after the Euros.’

Meanwhile, realistic Villa fans means this means f*** all, and they would quite like to see Grealish in their club’s colours on the actual pitch please, thank you.

Graeme Bryce even quotes a fan on social media saying: “No way they’d promote him this much if he’s off. Never in doubt.”

Unfortunately, what @jackygr3alish thinks might just be a tad biased and a tad unrealistic. Because of course there is no precedent for players declaring their love for Villa and then leaving. None at all.

The clue that Bryce knows this is absolute nonsense comes in the final line in the newspaper:

‘Unfortunately for Villa supporters the snaps were taken a few weeks ago.’

Or alternatively, ‘you know that story that I spent time writing and you spent time reading? That was bollocks’.

On the Sun website, they do not stop at Grealish but rope in his England teammate Declan Rice too.

‘DECLAN RICE features front and centre in West Ham’s new home kit launch in a huge hint he could stay at the club.’

A ‘huge hint’ to idiots, perhaps. He is literally their best and most valuable player and would be captain if Mark Noble shuffled off a season earlier than planned.

Further down the piece there is an admission that Rice has turned down two offers of a new West Ham deal this year amid interest from Manchester United and Chelsea, which feels like a slightly huger (?) hint about his future than the fact that he wore a shirt he is literally obliged to wear under the terms of his contract.

Want does not get
Mediawatch is amused by the wording of Darren Lewis’ back-page exclusive on the Daily Mirror.

‘CHELSEA want to offer Tammy Abraham as part of a massive bid to land Erling Haaland.’

If you didn’t whisper ‘I bet they do’, are you even a football fan?

Ole on a minute
On the inside pages of the Daily Mirror, David McDonnell has royally stitched up poor Ole Gunnar Solskjaer by claiming that ‘after leading Manchester United to third and second in the past two seasons, (he) now has his sights set on the Premier League title’. He might – and indeed he should – but he has said no such thing.

What he did say:

“We all need to start on the front foot and kick off at the right tempo because, when the season starts, we know how little can decide the season being a successful one or not so successful.”

It doesn’t sound like he is targeting the title. Maybe that comes next…

“We’ve got to look at pre-season and start the season better than we did last season. We gave ourselves a mountain to climb as it was a difficult start. Hopefully, this year, we’ve cracked the gradual improvement.”

Is that it? Maybe he is hoping to add another eight points…which would have taken them to the dizzy heights of second or third in each of the last five seasons.

“It’s building and improving. Of course we need to improve on a few things.

“We’ve looked at it and evaluated it, but it’s fine margins in football. If you win a penalty shoot-out, that’s a successful season.”

He’s still not said anything about the title, has he? Though that is some impressive propaganda about them contriving to lose the Europa League final to Villarreal.

“If you lose it, it’s just doom and gloom. So I’m sure the players will have recharged and know we’re a team on the up, improving all the time.”

Maybe they will. But he definitely did not say he is eyeing United’s first sustained title challenge since the exit of Sir Alex Ferguson. They are 9/1 fourth-favourites for a reason. Well, several reasons. One of them being Ole Gunnar Solskjaer.

Biteback productions
Brian Reade writes a long column in the Daily Mirror about how past England players ‘would scarper with their heads kept firmly down’ after failing in a summer tournament, saying that footballers were ‘conditioned to believe their own unfair stereotype’ and that meant they had to ‘take any amount of cr*p’.

He could have saved himself a whole lot of time by just writing five words: ‘Twitter is a thing now.’

Oh and they didn’t fail; that is kind of important too.

Inspirational
‘Raphael Varane can inspire the Manchester United dressing room like he did with Paul Pogba’ is the headline on a fluff piece in the Manchester Evening News about United’s prospective new signing and his history with Pogba.

It includes this quote from Pogba: “When you say he is a teammate, he is a true teammate. We progress together.”

That’s 15 words for those of you who cannot or care not to count.

Which was more than enough to inspire Mirror football‘s Jake Polden into this beauty of a headline:

He might indeed have a lot to say about Varane, but you have only found 15 words on which to base a 489-word article. Even for the peerless Polden, that is spectacular.