Home All The News Hughes accuses Stoke of ‘airbrushing’ his success 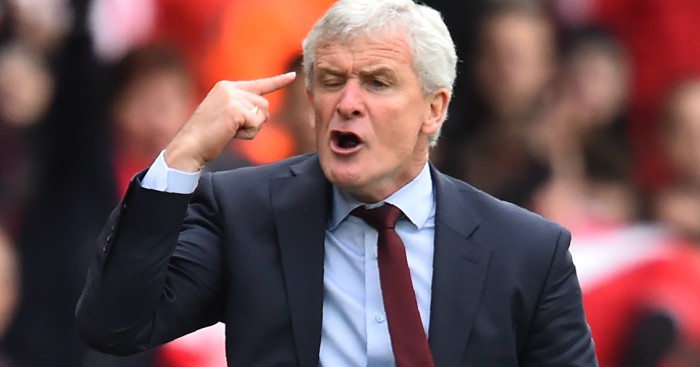 Mark Hughes has hit out at Stoke for trying to “airbrush” his successes at the Potters.

Stoke chiefs Peter and John Coates have now admitted they should have removed Hughes sooner than his January sacking, in the wake of the Staffordshire outfit’s Premier League relegation.

Hughes has led Saints to the brink of Premier League safety after taking the helm in March, and could well now stay at St Mary’s next term.

Asked for his stance on the Coates’ criticism of the tail-end of his near five-year tenure at Stoke, Hughes replied: “Well if that’s what they feel now, hindsight’s a wonderful thing.

“It’s there for everybody to see at the end of the day. I was their most successful Premier League manager.

“It didn’t end like I wanted, nobody wanted that.

“But myself and everybody on my staff put their heart and soul into that job for four-and-a-half years, and I’m really, really sorry that unfortunately they’ve gone out of the league.

“But it can happen to almost any team in the league if you take your eye off the ball.”

Saints’ vastly superior goal difference means even defeat to Manchester City at St Mary’s on Sunday is unlikely to threaten their survival now.

Hughes has backed Southampton’s stance not to open talks about a deal for him to remain in charge next season until this term is complete.

The 54-year-old is firmly in the frame to assume a permanent Saints role however, and insisted he has felt no pressure to restore his managerial reputation by ensuring Southampton’s survival.

Asked if he has had to rebuild his reputation, Hughes replied: “People would think that I needed to, but all managers know at some point you’re going to lose your job.

“I stayed at Stoke for four-and-a-half years, and the going rate for a Premier League manager is just over a year.

“So it just shows that at some point I must have done a decent job there.”