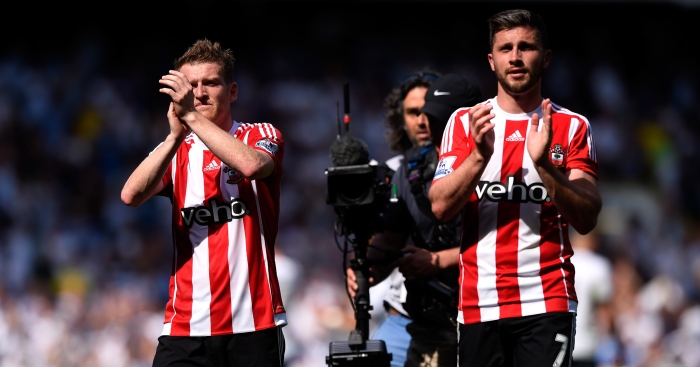 Mark Hughes has reassured Southampton captain Steven Davis and striker Shane Long that they remain in his long-term plans.

Davis and Long were left out of Saints’ 18-man squad for the goalless draw with Burnley on the opening weekend of the Premier League season.

Manager Hughes, who had a fully-fit squad against the Clarets, insists the experienced duo will continue to play prominent roles at St Mary’s.

“I’ve explained to the guys that didn’t play that it’s not a reflection on me thinking I don’t need them or they’re not in my plans because that’s not the case,” said Hughes ahead of Saturday’s trip to Everton.

“I think players, unfortunately – and it happened in my day – when they are not in the first 11 for the first game of the season all of a sudden they get a little bit anxious and think maybe my future lies elsewhere and agents are telling them they’ve got to move.

“And that’s not the case with Shane and the likes of Steven Davis.

“They’re very much part of what we’re going to do this year and I just said to them: ‘At the end of the year, you’ll look back on the season and you’ll find that you’ve played many, many games so bear with me’.”

Republic of Ireland international Long appears to have slipped down the pecking order following the deadline-day signing of striker Danny Ings, while the summer arrival of Stuart Armstrong has increased the midfield competition for Davis.

One player Hughes is willing to let go is third-choice goalkeeper Fraser Forster.

The out-of-favour England international, who is competing with Alex McCarthy and Angus Gunn for a starting place, has rejected a number of loan deals but may be open to a move abroad.

“There have been clubs in, some that Fraser didn’t feel were right for him and that’s his prerogative,” said Hughes.

“He wants to play and I’ve told him he needs to play, but we’ll see.

“If there’s an interesting option abroad, which I think he’s intimated he wouldn’t be adverse to, then that might happen.”

Southampton return to Goodison Park just over three months after conceding a stoppage-time equaliser which left their top-flight status hanging by a thread.

They recovered from the 1-1 draw to avoid relegation on the final day of the season.

“It was a difficult one. The abiding memory for me was the disappointment for the players themselves because they put in such a huge effort to get us over the line,” added Hughes.

“It felt like a harsh blow because of how we performed in the game but the impressive thing for me was how we recovered.

“We could have felt at that moment we weren’t going to stay in the Premier League but to a man they used it as motivation.”

Saints, who have not won at Everton since November 1997, are likely to be without Mohamed Elyounoussi due to a hamstring injury, but Scotland international Armstrong has shaken off a knock and should be available.