Home All The News Hughes: Dropped Boufal ‘acknowledges his mistake’ 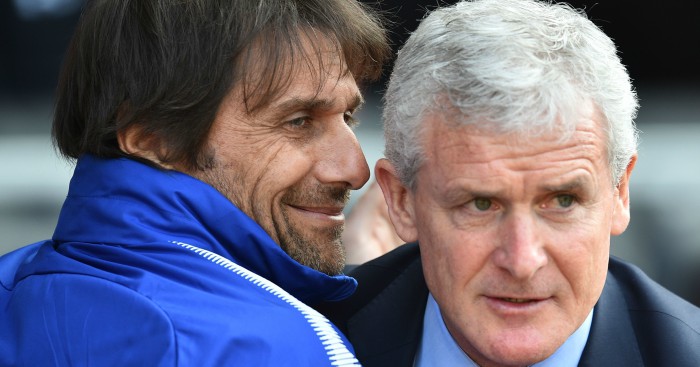 Mark Hughes has revealed that Sofiane Boufal has been exiled from Southampton’s first team as punishment for his involvement in a bust-up during the Premier League defeat to Chelsea.

Moroccan winger Boufal, a £16million club record signing when he arrived from French club Lille in 2016, reportedly refused to warm up after being named as a substitute for the 3-2 defeat at St Mary’s on April 14.

The 24-year-old has been made to train with Saints’ under-23 team since the incident and was left out of Hughes’ squads for the league draw at Leicester and Sunday’s FA Cup semi-final defeat to Antonio Conte’s Blues.

Southampton are in serious danger of relegation and boss Hughes, who will once again overlook Boufal for Saturday’s crucial clash with south-coast rivals Bournemouth, feels they cannot afford unnecessary distractions.

“Unfortunately, Sofi made a mistake which he acknowledged, and he has acknowledged to me since,” said Welshman Hughes, who did not go into detail about the row.

“He’s training with the under-23s. He’s best served training with a different group just to make people aware that the situation we found ourselves in wasn’t what should have happened.

“He understands that. He needs to rebuild a bit of trust with us and his own team-mates. That’s what we’re working on. He won’t be involved this weekend.

“I spoke about focus on the very first day in the job here. We can’t allow anything to distract us from that.”

After the weekend visit of Eddie Howe’s Cherries, Saints face trips to mid-table Everton and relegation rivals Swansea before finishing the season at home to champions Manchester City.

Hughes added that Boufal, who has made 30 appearances in all competitions this season, has expressed regret over his actions.

“We have very few games left. If I feel something might affect that focus, I have to address that,” continued Hughes.

“That’s the situation we find with Sofi.

“He made a mistake. He’s remorseful about it, which he needed to be, and we’ll build him back up to be in the group again.

“But the time for that isn’t now.

“It’s about him biding his time, doing the right things, until he’s reintegrated.”

Hughes has failed to win any of his four league matches since replacing the sacked Mauricio Pellegrino last month.

The former Stoke boss accepts his club must snap that run on Saturday.

“It’s black and white. We need to win the game.

“That’s what we have to do if we want to make the games after this significant.

“We need three points. They’ve been a long time coming.”

In addition to Boufal’s absence, Saints will be without captain Steven Davis, who could now miss the rest of the season due to the recurrence of an Achilles issue.