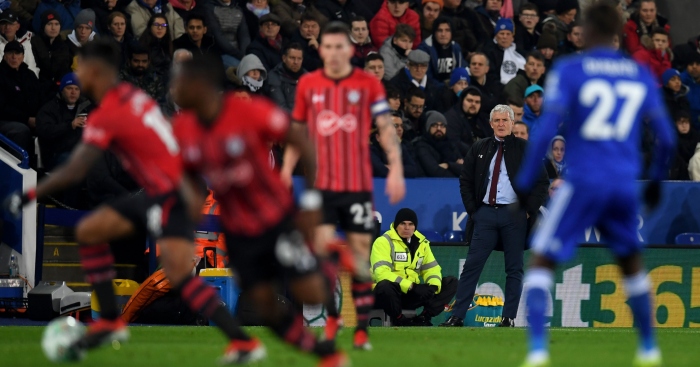 Southampton manager Mark Hughes has challenged his team to “be versatile” as they look to kickstart their season with a positive result against Manchester United.

The Saints boss has found his position in the media spotlight following a poor run of form which has put them in the bottom three of the Premier League. He could become the first manager to be sacked twice in a year by two Premier League clubs.

While Southampton have not managed a league win since September 1, Hughes maintains he has seen enough within the squad to remain confident things will turn around.

Hughes’ men were somewhat unfortunate to exit the Carabao Cup at Leicester on Tuesday night, seeing a late goal ruled out by the Video Assistant Referee and then losing a penalty shoot-out.

The Saints boss believes keeping an open mind on how to approach each game will prove key as the former United striker prepares to tackle one of his old clubs, themselves not in the most consistent form.

“We looked at a different thing (against Leicester) – different in terms of formation, going back to three at the back,” said Hughes, whose side went down 3-2 at Fulham last weekend in another match they could have got something from.

“That will have positives in games, and sometimes there’s negatives in any formation you go with, but it was interesting to see how the guys got back to that system and they looked very, very comfortable with it.

“I think that’s the benefit of the work we’ve done during the summer, so very quickly they understood the fundamentals of that.”

Hughes added on the Southampton website: “I just think it gives us another string to our bow.

“We’ve got to be versatile, we’ve got to be flexible in terms of how we go up against teams, because every team gives you different problems.

“It’s just given me food for thought. I think we need to keep our options open and go with what we feel will most affect Man United adversely.”

“United, obviously, with the resources they’ve got, have been able to acquire lots of very, very good players,” said Hughes.

“Sometimes when collectively they’re not quite gelling, which people have criticised them this year for, when they’re not quite where they need to be, they’ve still got that element of individual talent that can win games on the back of their own ability, rather than the collective talent of the group, so you’re always wary of that, because at any given moment someone can produce a moment of magic.

“But we were solid the other night (at Leicester) – we were up against good quality players in the likes of (Jamie) Vardy, and we dealt with him, so it will be a similar level of player we face at the weekend and we’ve just got to do more of the same.”