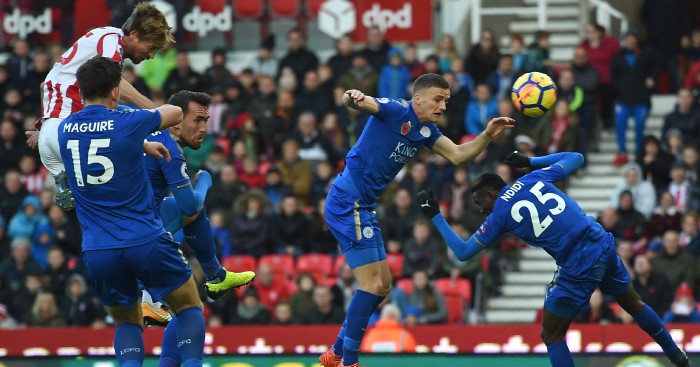 Stoke boss Mark Hughes is preparing a new contract for Peter Crouch and is sure the 37-year-old is nowhere near retirement.

The former England striker is the Potters’ top scorer this season with four goals, despite being used almost exclusively from the bench.

His cameo at Brighton on Monday saw him set a new Premier League record for substitute appearances, with 143, but there is no sign of him winding down his top-flight career.

Instead, he has spoken of playing on until 40 and Hughes is happy to help with an extended stay at the Bet365 Stadium.

“I think people concentrate too much on his age, in terms of where he is in his career,” Hughes told a press conference on Friday.

“It is a credit to him that he is playing at the level he is. I may be doing him a disservice saying he is 37, but he has at least two or three more years at this level. We will more than likely offer him another deal very soon. We would like to think that he will be here for a long time – I will probably speak to him today about it actually.

“Peter is an exceptional player and a great guy as well.”

Stoke are three games unbeaten and will be hopeful of adding to that run when they visit an Eagles side who lie three points adrift at the foot of the table, with a punishing goal difference of minus 18.

Yet Hughes sees plenty of attacking talent in the Eagles’ ranks and expects their fightback to begin soon. His job is to delay that for another week.

“Crystal Palace are fighting for their lives and will want to maximise their opportunities by getting all three points against us,” he said.

“If you look at the strength they have at the top end of the pitch then you would anticipate that they will turn things around.

“Possibly they haven’t had the defensive platform to enable them to release the quality attackers they have to win matches for them. You do feel that at some point, with the quality they have, they will go on a run.

“They have players like Christian Benteke, Wilfried Zaha and many others, they are very good players who we need to keep quiet throughout the 90 minutes.”

Hughes is considering standing Xherdan Shaqiri down to alleviate a tight hamstring and is still awaiting the return of goalkeeper Jack Butland (broken finger) and Geoff Cameron (concussion) to full training.