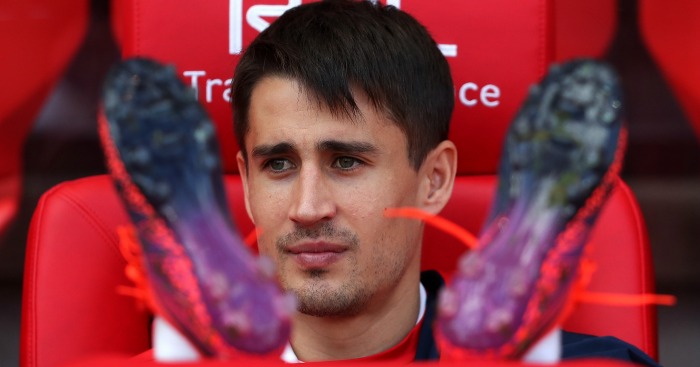 Stoke boss Mark Hughes has assured Bojan Krkic he wants to give him “good game time” between now and the end of the season.

So far this term in the Premier League the Spanish playmaker has only started five matches and come off the bench three times, and his representatives have held talks with Hughes over the matter.

Asked about that at a press conference on Thursday, Hughes stressed Stoke want Bojan to stay and insists he remains a “big part” of their plans, while also emphasising the importance of making “correct” decisions about when he is utilised.

“Bojan’s people came in and we had a discussion,” Hughes said.

“It (the amount Bojan has played) has been more to do with a slight change in formation and the way we have gone in certain games which I felt probably wouldn’t allow his talents to come to the fore as much.

“Then sometimes when we have been protecting leads, he hasn’t been the right option off the bench. Other times you look to bring him on, which we did to good effect at West Ham (a 1-1 draw in November in which he scored).

“I made my feelings known. Clearly he wants to play more, and I want to give him more opportunity from now until the end of the season.

“It’s just making sure we get those decisions correct in terms of when he plays and when he has an impact.

“He is very well thought of, an outstanding player and is going to get good game time from now until the end of the year – it is just up to us to make sure he is happy enough with the game time we give him.

“My position on it is clear – we want him to stay. He is a big part of what we are doing.”

Stoke are set to lose Wilfried Bony, Mame Diouf and Ramadan Sobhi next month due to the African Nations Cup, and Hughes added: “We have three attacking players leaving in January, so he (Bojan) is going to get game time then certainly.

“And I’m sure once he gets that opportunity, he’ll probably stay in the team.”

Hughes was speaking ahead of the New Year’s Eve trip to league leaders Chelsea.

The Blues are currently on an incredible 12-match winning streak, in which Victor Moses, to the surprise of many, has been a key player.

And Hughes said on Thursday with a smile: “He has done very well, I’m not surprised at all and I’m going to take all the credit for his defensive work because when he came here he wasn’t great at that – we taught him how to defend and now he’s reaping the benefits at Chelsea!”

Meanwhile, Hughes has indicated a loan move next month for either Napoli forward Manolo Gabbiadini or Leipzig striker Davie Selke could be on the cards.

After Gabbiadini and Selke’s names were put to him on Thursday, he said: “There’s nothing definite on those, or any others.

“I think possibly one of them is available on loan, maybe, if their club or the player thinks it is a good or viable option. But there is nothing set in stone at this stage.”

Also, Stoke are attempting to secure on-loan goalkeeper Lee Grant from Derby on a permanent deal, and when asked if there was any update on that front, Hughes said: “I’m more optimistic today than possibly I was last week.”