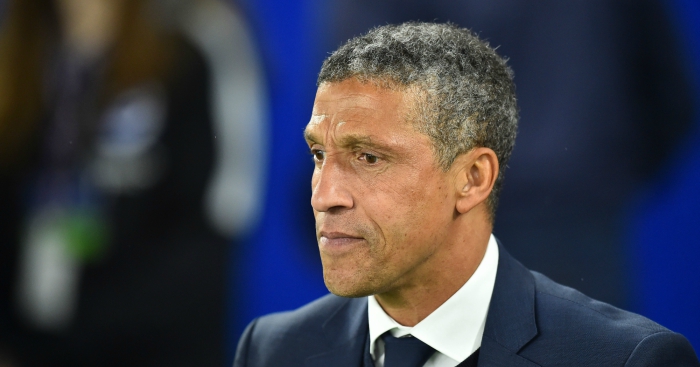 Brighton boss Chris Hughton has welcomed the Football Association’s decision to adopt its own version of the ‘Rooney Rule’.

The FA announced on Tuesday that it will interview at least one applicant from a black, Asian or minority ethnic background (BAME) for future roles in the England set-up.

Hughton, who has been with Albion for just over three years, is one of only five BAME managers currently in charge of one of the 92 Premier League and Football League clubs and believes the news is a step in the right direction.

“It’s a subject that I have spoken quite a lot about, particularly over the last year, and I certainly feel that for the FA to make the decision that they have made, I think it’s something that’s very promising and very worthwhile,” said Hughton.

“I would applaud what they have done and certainly I would see it as a positive.”

Asked whether the FA should have adopted a similar policy earlier, Hughton added: “I think we can speak about lots of aspects and rights and wrongs and what could have been done. But what we have to do is speak about now and progress that can be made.

“All we want eventually to see is more black and ethnic coaches involved at the higher levels of the game, anything that promotes that is something very much worthwhile.”

Veteran midfielder Sidwell has not featured at all this season due to a back problem.

He has now sustained an ankle issue in training and Hughton does not expect the former Stoke man to be available for at least a further two months.

“Steve Sidwell has also had an ankle problem which has happened over the last week, so as regards having him available for the next few months then we are sure that won’t be the case,” said Hughton.

“With any injury, with any player, whatever the squad is, it is always a blow and as big a blow for the individual themselves. But we have to continually try to assess what we have.

“We have been without him for the season so far so this is not a player at this particular moment that’s been playing and is now injured.”